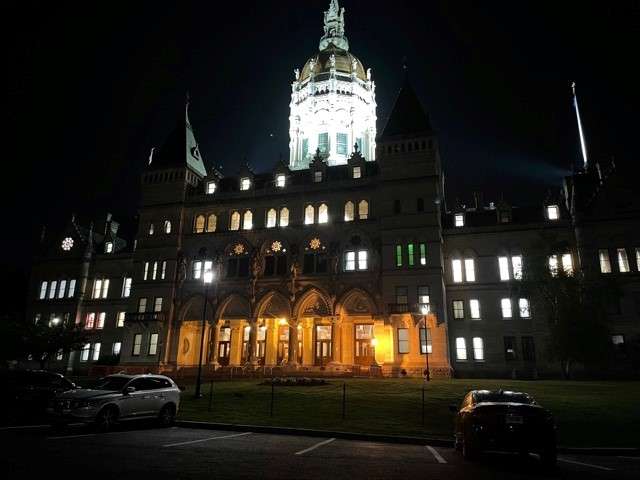 The state Capitol was lit up the night of June 8, 2021 as the House of Representatives debated the two-year budget bill. The $46.4 biennial budget contained a $2.3 billion surplus which has now grown by about $500 million.

When lawmakers adopted a new, two-year state budget in early June, some observers blinked at the unprecedented, $2.3 billion surplus built into the package.

Now, just four weeks into the new budget, it looks as though this fiscal cushion might be fatter by hundreds of millions of dollars.

That’s because the revenue forecast used to craft the $46.4 billion biennial package relied heavily on state tax data available only through mid-May. Since then, nearly $500 million extra has poured into Connecticut’s coffers, according to reports from Lamont’s budget office.

“I don’t know if we should be more optimistic [right now] but I think it confirms things continue to go in the right direction,” said Rep. Sean Scanlon, D-Guilford, House chairman of the Finance, Revenue and Bonding Committee.

“We don’t know,” she added. “We are looking at an unpredictable economic climate.”

What legislators and Lamont do know is that General Fund revenues for the fiscal year that closed on June 30 are being pegged now at just over $20.3 billion — $274 million more than were anticipated in mid-May.

In addition, a special component of state finances captures a portion of income tax revenues tied to capital gains and dividends before they can be spent. Estimates for this savings program — dubbed the “volatility adjustment” because of the up-and-down nature of investment-related tax receipts — grew by $215 million between the new budget’s adoption and June 30.

But traditionally, at least a portion of that type of growth is projected to occur again in the next budget.

Melissa McCaw, Lamont’s budget director, was not available for comment late last week, but she wrote in a statement that “The revenue schedule adopted as part of the FY22 and 23 budget remains unchanged.”

Lamont’s budget office and the legislature’s nonpartisan Office of Fiscal Analysis must issue three consensus revenue reports annually, but their next update isn’t due until Nov. 10.

The budget Lamont and lawmakers adopted for this fiscal year and next already has a projected, built-in cushion of about $2.3 billion.

If projections hold two years from now, most of those dollars would be deposited as supplemental payments into Connecticut’s pension systems for state employees and municipal teachers, which collectively have about $40 billion in long-term, unfunded obligations.

Normally any surplus would be deposited into the rainy day fund. But with close to $3.1 billion already held, the reserve is at its legal maximum, equal to 15% of the state’s annual operating expenses.

According to the Department of Labor, about 165,000 residents still receive weekly unemployment benefits.

And various federal programs that have enhanced state jobless benefits, including one that adds $300 from Washington to weekly state payments, expires on Sept. 4.

Cheeseman also noted that the state government’s coffers have benefited from a “crazy high stock market.” The Dow Jones Industrial Average closed last week at 35,061, about 30% higher than it was in early March, just before the pandemic struck Connecticut.

But Cheeseman said it also has been unstable of late.

The Dow suffered its worst single-day decline on Monday, July 19, falling 725 points. But by Friday of last week it had recovered all of its losses.

Scanlon, who tried this year to enact state income tax relief for Connecticut’s poor and middle class — but was blocked by Lamont — said the surging revenues should only boost momentum for a tax relief debate in 2022.

Because of the unstable economy, the administration argued Connecticut could not be certain it could afford a tax cut at this time.

Scanlon wanted a new child tax credit to give low- and middle-income households $600 per dependent — up to a maximum of $1,800 — off of their state income taxes. This would cost Connecticut about $300 million per year, according to analysts.

Scanlon argued the same economic woes cited by Lamont were the reason so many households need relief now.

And yet the deficit rises. Are we ever going to hear about where the $250 million raid of the transportation fund went to?

To be clear I’m only asking about this one, not the multi billion draw downs for things other than transportation in the last 10 years.

@Bryan – I’m looking for Treasurer Wooden’s investment returns. Would you have any idea where we’d find those ?
On a side note, those surpluses mentioned in article are really not surpluses. Connecticut has one of the biggest underfunded pensions on the planet. Our crack delegation knows that but doesn’t want us to know that.

Imagine if the surplus was used to provide tax breaks/subsidies so CT could encourage good jobs for our depressed areas like Bridgeport. Or reduce CT taxes for the elderly, infirm and lower incomes.

Will they finally fix the potholes? Or just spend another 70k on crosswalks?