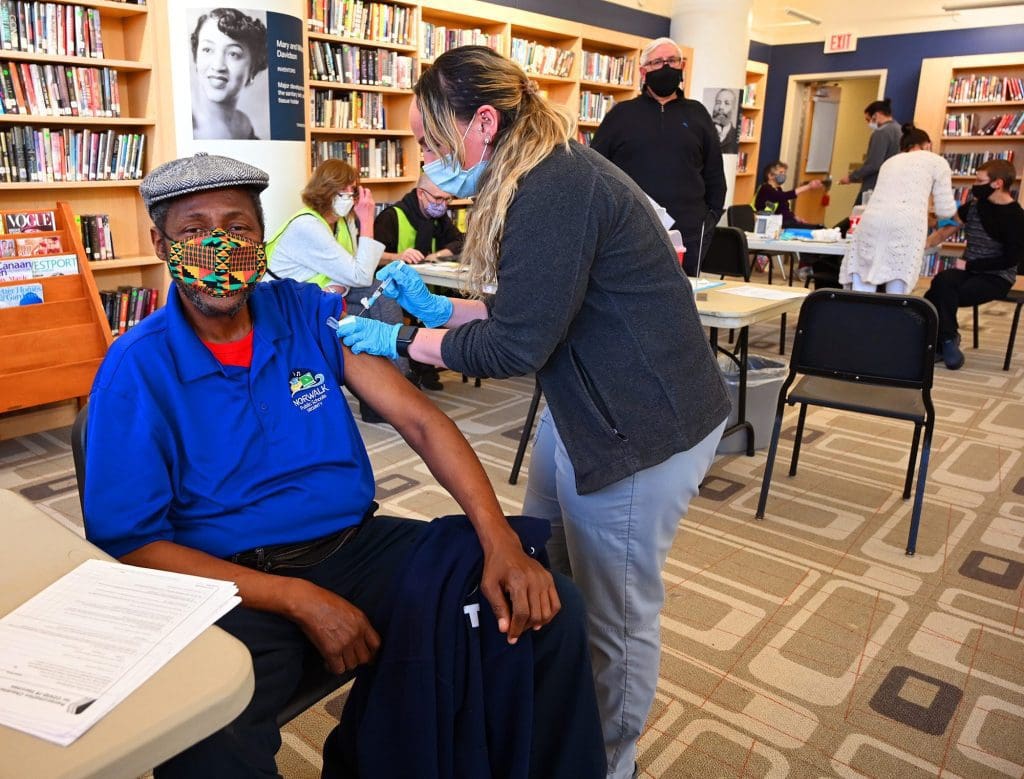 Connecticut’s public health department on Tuesday urged medical providers to halt use of the Johnson & Johnson COVID-19 vaccine across the state, following recommendations by the Centers for Disease Control and Prevention and the Food and Drug Administration.

Norwalk has paused its use of the J&J vaccine, on advice of federal and state officials. “Norwalk Health Department vaccine clinics this week, including tomorrow at Bow Tie Cinemas, will continue uninterrupted, as the Moderna vaccine will be administered,” the City said in a statement.

The federal agencies encouraged states to pause use of the vaccine after six cases of rare blood clotting were reported among women who received the shot. The women were between the ages of 18 and 48; symptoms occurred six to 13 days after vaccination.

Gov. Ned Lamont and state health officials stressed that the condition was extremely rare and that while the matter is under investigation, there is not yet a clear correlation between the vaccine and the clotting issue.

“There have been six severe side effects out of 6.8 million J&J doses administered in the United States over the last many months. That’s a one-in-a-million chance of having that type of a severe side effect,” Lamont said. “That’s somewhere in the area of getting struck by lightning, or probably a higher chance of driving to the vaccination site and getting into an accident.”

Deidre Gifford, the state’s acting public health commissioner, said no cases of the clotting issue have been reported in Connecticut.

“Nationally, 6.8 million – almost 7 million – doses of J&J have been administered with only the six cases being reported. So that’s very reassuring as to the rarity of this potential complication,” Gifford said. “And I should emphasize that although there’s an association and the FDA and CDC are doing this investigation, we don’t know for sure about the relationship between these events and the J&J vaccine.”

The clotting condition was not reported in connection with the Pfizer or Moderna vaccines.

“All the things that we do in health care carry some risks, whether you have a procedure, a surgery, or take a medication. We weigh the benefits and risks,” Gifford said. “We certainly know there are tremendous benefits to these vaccines. And there are certainly risks of getting COVID, getting hospitalized, or even dying from COVID. So those things need to be kept in mind as well.”

Connecticut health officials said they were ceasing use of the Johnson & Johnson vaccine “for the time being while the FDA and CDC complete their review.”

About 100,000 state residents have received the J&J shot with no reported serious adverse events, the health department said Tuesday. More than 120,000 J&J doses have been allocated to Connecticut so far — not including federal supply sent to pharmacies and federally qualified health centers — including 6,400 this week, according to data from the U.S. Department of Health and Human Services.

State officials asked providers who were planning to hold clinics using the vaccine this week to delay the clinics or offer an alternative shot. Providers are encouraged to contact all patients who were scheduled to receive a J&J vaccine to let them know their appointments will be rescheduled.

Norwalk said it would halt J&J shots “out of an abundance of caution.”

“The Norwalk Health Department has administered roughly 750 J&J vaccines out of nearly 9,000 total vaccines given and there have been no severe side effects reported from any of the shots administered,” the statement said. “People who have received the J&J vaccine who develop severe headache, abdominal pain, leg pain, or shortness of breath within three weeks after vaccination should contact their health care provider.”

“DPH will work with providers to minimize the disruptions from this announcement in the near-term to the extent possible, but we anticipate that some cancellations will occur,” the health department said in a statement. “The CDC, FDA and Connecticut DPH all take vaccine safety extremely seriously. Although the reported complications are extremely rare, we will await the results of the investigation before proceeding with further use of the J&J vaccine.”

Janet Woodcock, the acting commissioner of the FDA, said Tuesday that the pause was expected to last only “a matter of days,” depending on “what we learn in the next few days.”

Connecticut has used the vaccine to reach people where a single shot has strategic advantages — in its recent deployment of 35 mobile vans to cities and at-risk areas, for example. Pop-up clinics have also utilized the vaccine, along with providers who immunize new nursing home residents and staff.

In a recent memo to administrators at Connecticut’s 27 acute-care hospitals, state officials suggested that patients who are being discharged to nursing homes be vaccinated with the Johnson & Johnson shot. Hospitals were able to request additional supply of the J&J vaccine to facilitate the effort.

State officials had anticipated that the number of J&J doses Connecticut receives would drop in the coming weeks due to manufacturing difficulties, but they vowed as recently as Monday that the state’s efforts to reach people in at-risk areas would continue unabated.

On Tuesday, the health department said a trailer from the Federal Emergency Management Agency that has been making rounds in Connecticut cities, most recently in New Britain, would modify its schedule and offer the Pfizer or Moderna shots instead of Johnson & Johnson. Several pharmacies that were administering the J&J vaccine will cancel their appointments.

Mobile units run by Griffin Hospital, which currently use the J&J vaccine, canceled their clinics Tuesday. In the future, state leaders said the mobile units will switch over to Pfizer or Moderna shots, though they did not yet have a strategy for scheduling second-dose appointments.

“We know that people will need a second dose, and they’ll get their card with the date that they need their second dose. Today, we may not be able to schedule that second appointment,” Gifford said. “The goal will be to get the second appointment scheduled at the time of the first. But today and possibly tomorrow, we’re going to have to work through some of those glitches.”

Officials are trying to arrange a second round of shots through the FEMA trailer.

“We’re going to make every effort to have the units administer the second dose,” Gifford said, “but we’re not quite sure yet whether we’ll be able to do that in all cases.”

Hartford HealthCare said Tuesday that it will stop administering the J&J vaccine immediately. As of Tuesday morning, the health system had vaccinated 18,857 people using the J&J shot.

“We have adjusted our vaccine distribution in every one of our vaccines clinics to provide only Pfizer and Moderna products,” said Dr. James Cardon, Hartford HealthCare’s Chief Clinical Integration Officer. “As always, safety is our first priority and we immediately followed the guidance of federal health agencies while the health concerns with J&J are being thoroughly investigated.”

“If you’ve received the J&J vaccine more than two weeks ago, like me, you can be reassured that these rare complications – they occurred between six and 13 days after vaccine administration. So if it’s been more than a couple of weeks since you got your J&J vaccine, you can be even more comfortable that this does not implicate your particular vaccine,” Gifford said Tuesday. “If you’re somebody who received the J&J vaccine in the last couple of weeks, you can also be comfortable that this is a very, very rare event.”

Many will be happy to know that I received the J&J shot on Sunday in a Publix in Florida. 3 days in and nothing that can’t be attributed to hypochondria. Someone let Mushak know if I roll a 7…

David – the odds are in your favor you’ll be fine.

pulling this vaccine for a .000088% chance you might be one of the 6 people who has these side effects is irresponsible. By any objective measure this is safe.