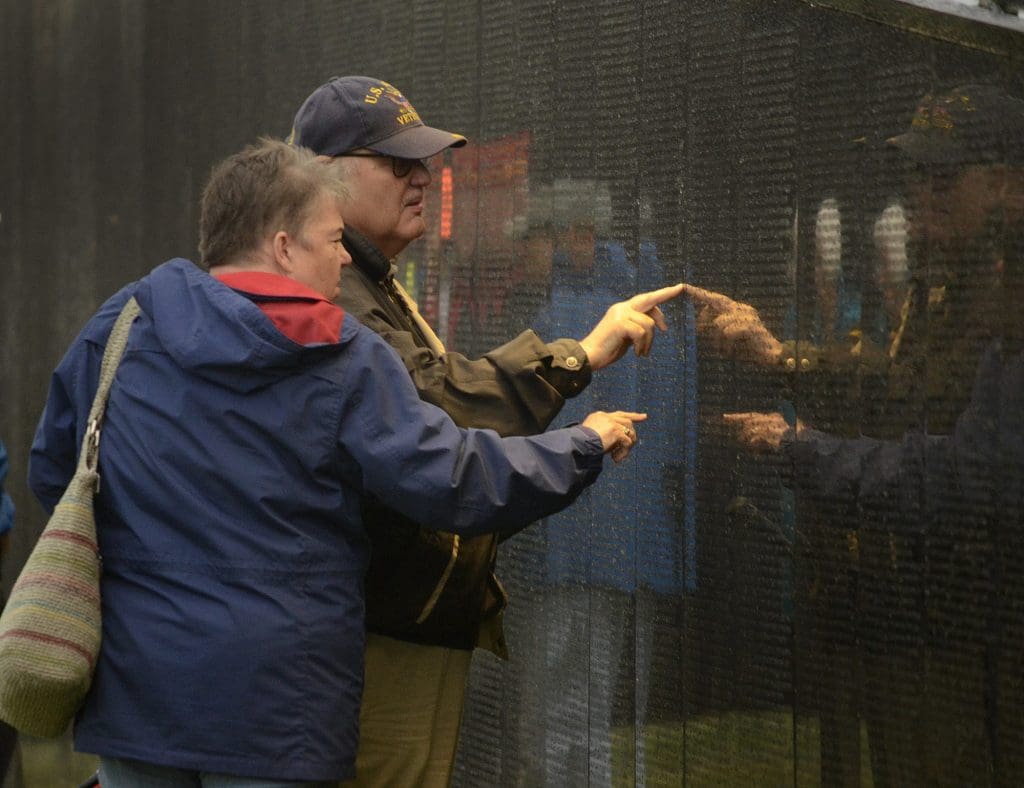 Louise and Greg Bryson search for a name on “The Wall That Heals,” Thursday in Veterans Park. 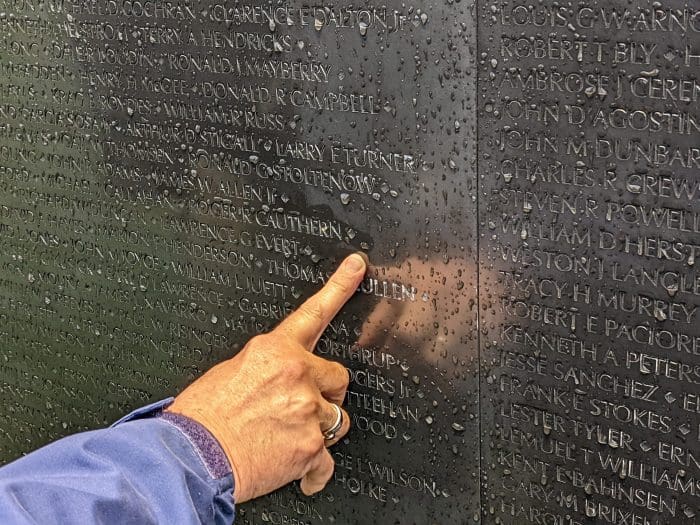 Louise Bryson finds Roger Cauthern’s name on “The Wall That Heals,” Thursday in Veterans Park. Cauthern was engaged to Bryson’s brother’s best friend in the late 60s, she said.

NORWALK, Conn. — The Vietnam War memorial was welcomed to Norwalk with an opening ceremony Thursday in a soggy Veterans Park.

“There are some people at this event in this city in this country that slogged through rice paddies in the rain, and if they could do that, we can do this,” said Jeff DeWitt, Chairman of the Military & Veterans Liaison Committee, in kicking off the ceremony after a rainstorm passed.

Wreaths were laid at the wall and prayers were said. There are 58,000 names on the wall,  representing the servicemen who died; 61% were 18 years old or younger, according to keynote speaker Robin Montgomery.

“Each one of those names has a story,” Montgomery said.

It’s the second time “The Wall That Heals,” a replica of a memorial in Washington D.C., has come to Norwalk, Mayor Harry Rilling said.

“They call it ‘The Wall That Heals’ for a reason,” Rilling said. “Because healing is necessary. Most Vietnam veterans now are in their 70s, perhaps 80s. And they’ve lived a life of just sadness, keeping things inside of them because of what they experienced when they were overseas.”

“The Vietnam War and active U.S. involvement in the war began in 1954, though ongoing conflict in the region had stretched back several decades,” History.com states. “… By 1962, the U.S. military presence in South Vietnam had reached some 9,000 troops, compared with fewer than 800 during the 1950s.”

“Opposition to the war in the United States bitterly divided Americans, even after President Richard Nixon signed the Paris Peace Accords and ordered the withdrawal of U.S. forces in 1973,” History.com states. “Communist forces ended the war by seizing control of South Vietnam in 1975, and the country was unified as the Socialist Republic of Vietnam the following year.”

Norma Nyquist told opening ceremony attendees part of how it affected her: She was a girl in the Philippines when she met a handsome man from Wisconsin, there as part of his pilot training. Against the odds, he returned again and again and eventually sought her hand in marriage. There were hurdles to jump but the knot was tied, and as he left right after the wedding to return to Vietnam, she wondered if she’d ever see him alive again.

She didn’t. He was shot down less than two months later and perished. 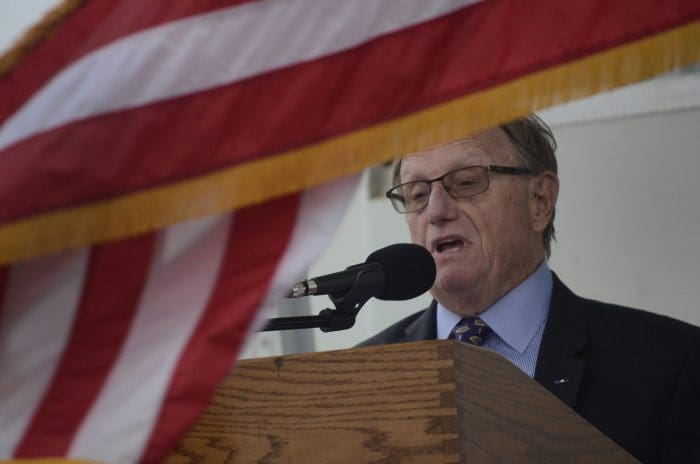 Montgomery, who served as a marine in Vietnam, said he was seriously wounded in June 1969 and “was lucky to make it back home.”

“The older I get, the more I realize just how great of a loss we had with those 58,000 names on that wall,” he said. “Not just how many died. But how those lives were cut so short.”

He said, “As you reflect on the wall, you want to reflect, not on numbers, not on statistics. But on stories, stories like Norma just told.”

The memorial is open 24 hours a day through 2 p.m. Sunday June 5.  LED lighting will enable nighttime viewing.  Full details including a schedule of attendant activities is here. 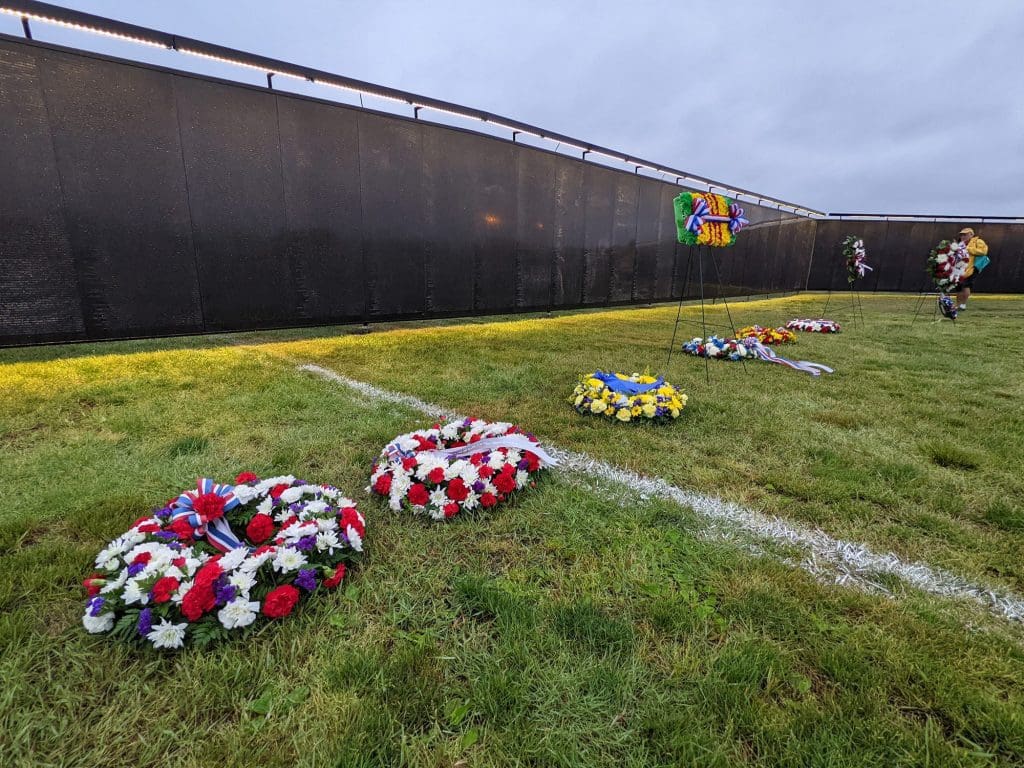 Wreaths laid in front of “The Wall That Heals,” Thursday in Veterans Park. 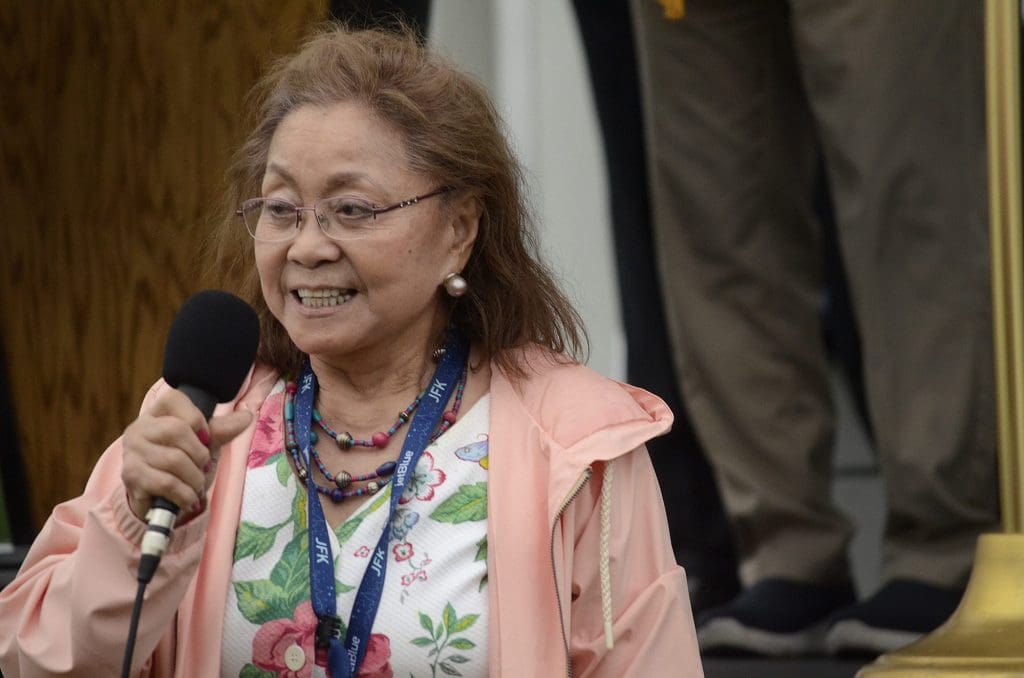 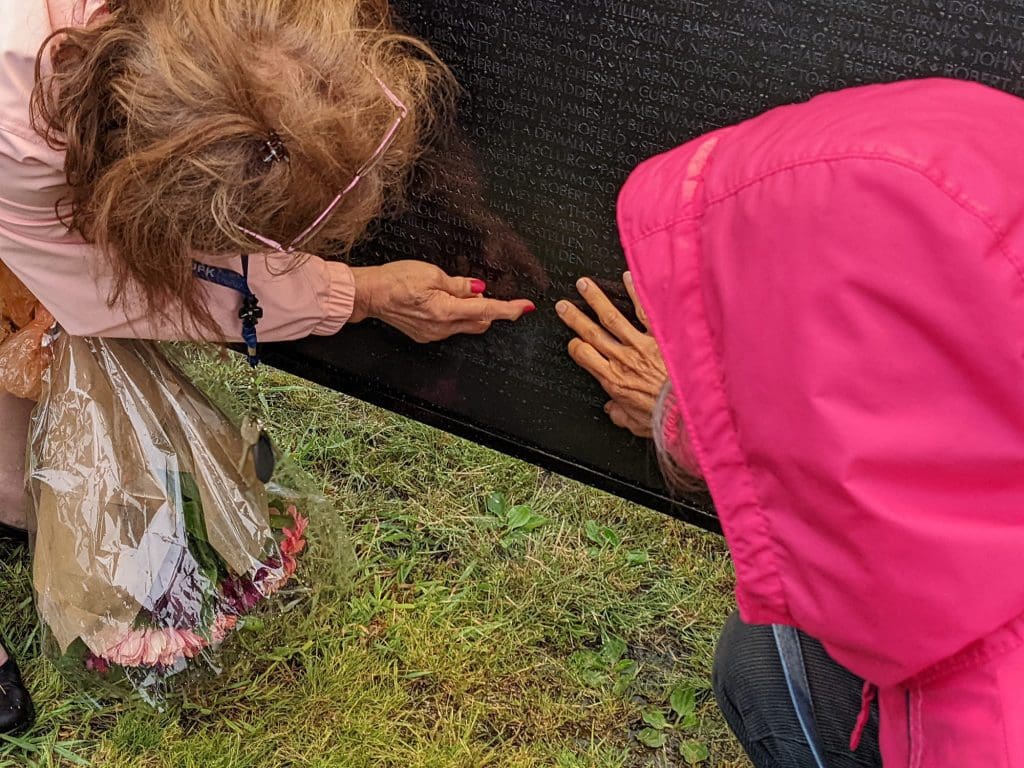 Norma Nyquist finds the name of her late husband, Charles Edward McLeish, on “The Wall That Heals,” Thursday in Veterans Park. She left a bouquet of flowers there. Volunteers will pick it up when the wall heads elsewhere Sunday. 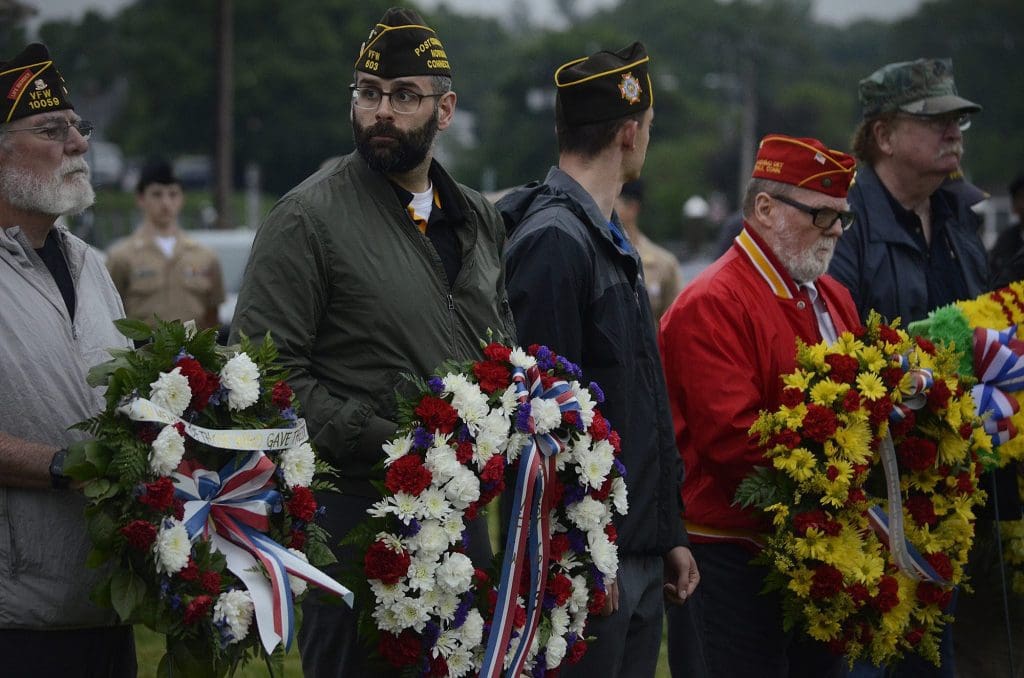 Veterans line up to lay wreaths in front of “The Wall That Heals,” Thursday in Veterans Park. 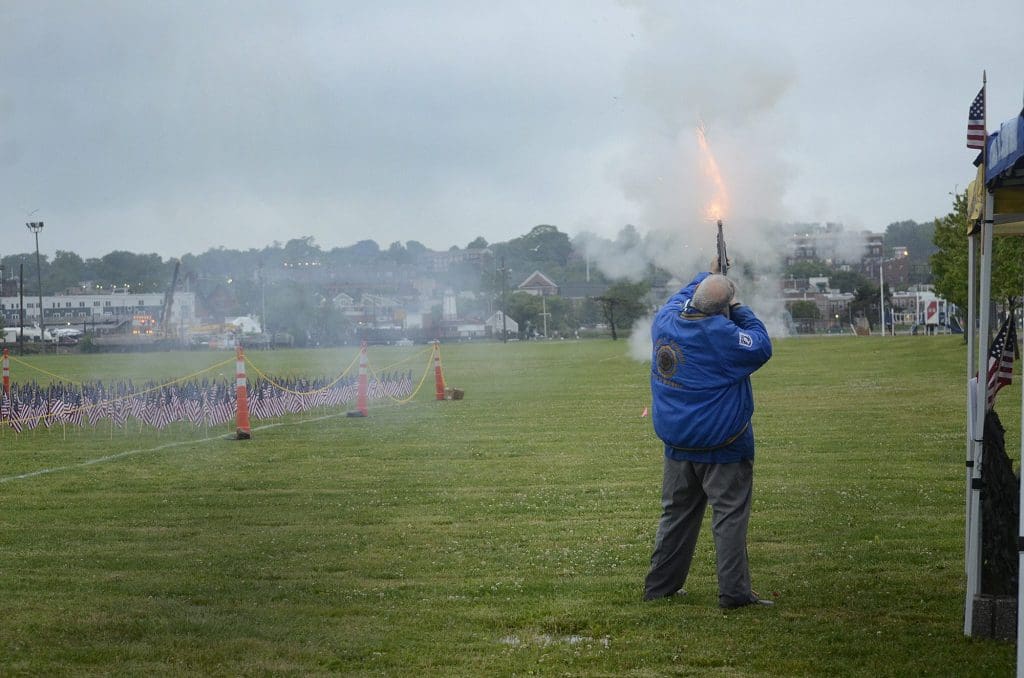 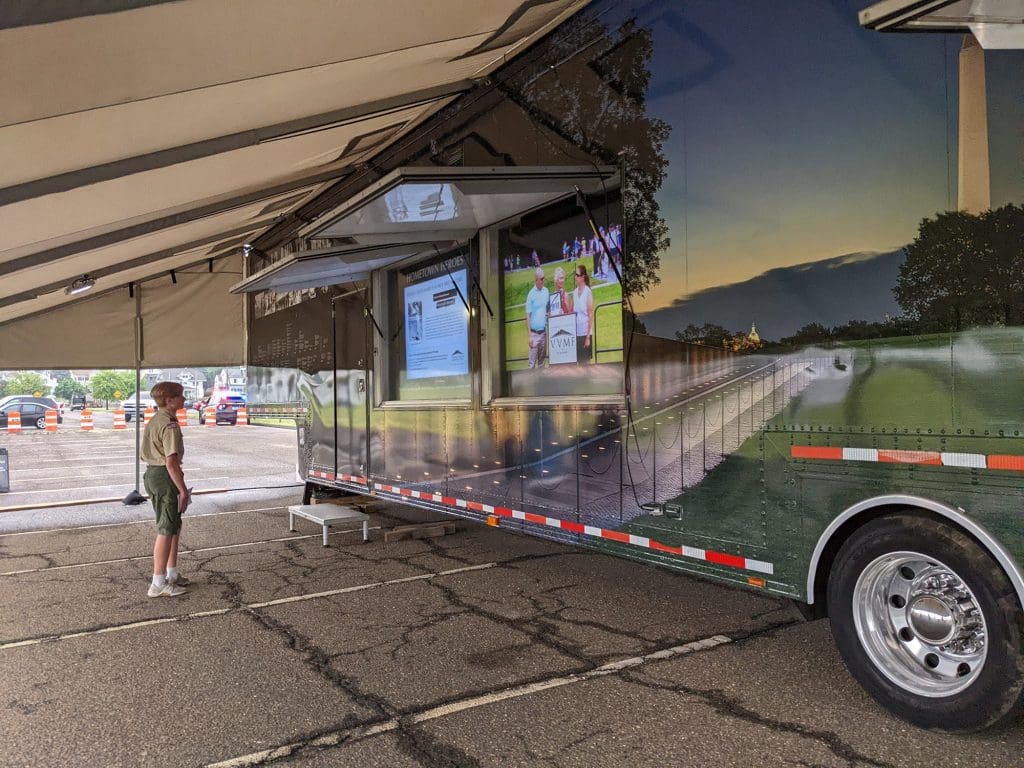 “The Wall That Heals” includes an educational display.

Some years ago I had the honor of visiting the Vietnam Memorial in DC. One thing that struck me (beyond the sheer starkness) was the fact that young children seemed to sense the gravity of the memorial. They were mainly silent. Not sure how that happens but it was the case

Salute to the Brave both of my Uncles where in Vietnam delta Kong ..veterans Day I was the only one flying a Flag to Honor the fallen very sad

After see the memorial today, I wish we had a way for the Memorial Day parade to END at Vets Park instead of the Democrats Palace, City Hall

Kudos to Jeff DeWitt, his committee and the folks at Post/Squadron/ALA 12 for making this happen. A truly moving and worthy cause.