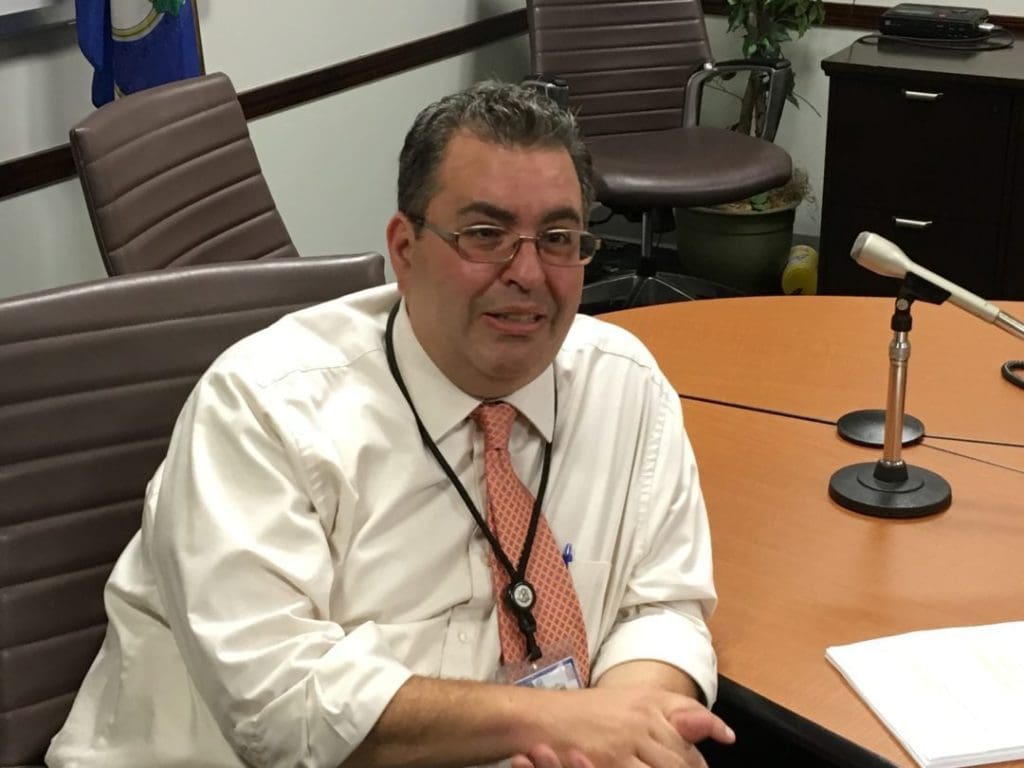 President Donald J. Trump is correct in saying voter fraud is real. And if he were a losing candidate for, say, the Board of Representatives in Stamford, Conn., in 2015, Trump might have a valid claim he was robbed. But not in the 2020 race for president.

All evidence points to voter fraud as local, small-scale and relatively rare — not national or assembly-line efficient. A dozen or so improperly obtained absentee ballots can conceivably tip a close local election, as was alleged to have happened in Stamford five years ago. It never has been pervasive or scalable.

Trump’s unsupported claim Thursday that 2.7 million votes were somehow deleted or altered in electronic voting systems provoked a remarkable rebuke from within his own administration about the president’s ignorance, willful or not, about how U.S. elections are conducted.

“All of the states with close results in the 2020 presidential race have paper records of each vote, allowing the ability to go back and count each ballot if necessary,” said a cybersecurity panel within the Department of Homeland Security. “There is no evidence that any voting system deleted or lost votes, changed votes, or was in any way compromised.” 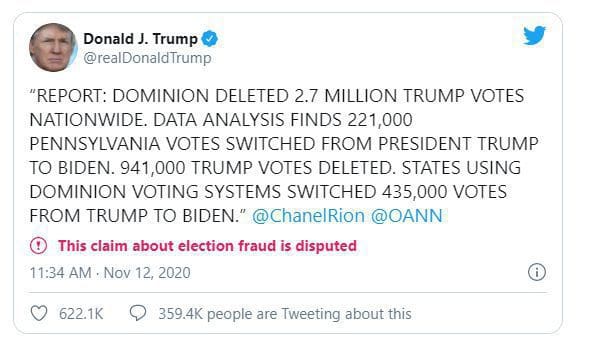 “While we know there are many unfounded claims and opportunities for misinformation about the process of our elections, we can assure you we have the utmost confidence in the security and integrity of our elections, and you should too. When you have questions, turn to elections officials as trusted voices as they administer elections,” said the Cybersecurity & Infrastructure Security Agency, part of Homeland Security.

“I think it does an incredible disservice to all the dedicated elections officials across the country. It impacts people’s faith in elections. That’s the core of our democracy, and it shouldn’t be,” Brandi said.

That’s not to say mistakes aren’t made — or that fraud doesn’t happen.

There is at least one documented case of someone registering and voting in two different towns in the same election in Connecticut. In another, SEEC could neither prove nor disprove that someone voted twice, faulting local election records that should have left no doubt.

Brandi said those cases are extremely rare. Connecticut has a statewide database that allows local officials to ensure a voter is registered only in one community, and the state is one of 30 participating in ERIC, the Electronic Registration Information Center, which allows cross-state checks.

“Absolutely, mistakes are made,” Brandi said. “There’s a lot of human process in this. And it happens, but we have so many checks and balances within the system that those mistakes are caught and corrected as soon as possible.”

Connecticut had such an incident this year. It is not clear how, but results from one of the nine polling places in the 90th House District of Cheshire and Wallingford were not uploaded to the state’s election management system. Democrat Jim Jinks was deemed the winner until Monday, when Wallingford officials discovered the error.

The corrected results gave Rep. Craig Fishbein, R-Wallingford, a 21-vote win, a margin that prompted an automatic recount. On Friday, a recount witnessed by representatives of both candidates confirmed Fishbein as the winner by 17 votes.

“It’s good to know it does work,” said Barbara Thompson, the town clerk of Wallingford. “You can believe in the results.”

In Connecticut, votes are cast by paper ballots and counted by optical scanners, which are not linked to the internet, providing both a paper trail and a safeguard against hacking. In the 90th District recount, every paper ballot was fed through the scanner again.

Most of the elections enforcement fraud cases involve absentee ballots. In 2015, officials say, a Democratic Party official in Stamford submitted as many as 29 forged absentee ballots applications in a case that both exposed weaknesses and safeguards in the system. He later was accused of fraudulently obtaining 14 ballots.

The clerk’s office then erred by giving the official absentee ballots to deliver, rather than follow state law and mail them.

Brandi said the scheme was uncovered by the ultimate check and balance: On election day, one of the voters whose name had been forged on an application turned up at the polls to vote. He was allowed to vote, but the absentee ballot cast in his name was impounded and referred to the State Elections Enforcement Commission.

The resulting investigation led to a criminal referral to the Chief State’s Attorney’s office and the arrest of John Mallozzi, who then was the Democratic town chair. His case is pending.

The commission also has a pending investigation of allegations of absentee ballot fraud in a municipal election in Bridgeport.

While Trump complained this year that absentee and mail-in ballots were vulnerable to  fraud, his concern four years ago was about the dead: He complained that the failure by the states to regularly update voter rolls and strike the names of the dead left the system open to fraud. He cited a report issued in 2012 by the Pew Center on the States to back up his claim that the dead vote, and plenty of them remain on the rolls.

But the Pew report never suggested evidence of widespread voting using the names of the dead. Rather, it was a call to update voter registration systems so that they more quickly reflect voters who move and, yes, those who die.

The dead occasionally are marked as voting. But in every case investigated by elections officials in Connecticut, it has turned out to be a clerical error, not fraud. Typically, a father and son have the same name. The father dies, the son votes — but the father is wrongly checked off as voting, not the son.

In 2014, a sharp-eyed official in Watertown found what appeared to be an open-and-shut case of fraud when an absentee ballot  arrived in the mail from a man known to be dead. A complaint was filed, and the ballot set aside for investigators. But when they opened the envelope with the ballot, investigators found evidence of honesty, not fraud.

Inside was an unmarked ballot with a sticky note affixed by the man’s widow: “George Died 9-17-2014.”

The case was closed.

I’m curious the numbers for the 2020 election in Norwalk according to the hour or lower than 2016 that said according to the register of voters 16,000 people voted by absentee and the lines were ridiculous I’m betting there’s some issue with one of those sets of numbers if not both

Here’s part of the article:

“There is a bipartisan consensus that voting by mail, whatever its impact, is more easily abused than other forms. In a 2005 report signed by President Jimmy Carter and James A. Baker III, who served as secretary of state under the first President George Bush, the Commission on Federal Election Reform concluded, “Absentee ballots remain the largest source of potential voter fraud.” On the most basic level, absentee voting replaces the oversight that exists at polling places with something akin to an honor system. “Absentee voting is to voting in person,” Judge Richard A. Posner of the United States Court of Appeals for the Seventh Circuit has written, “as a take-home exam is to a proctored one.” Election administrators have a shorthand name for a central weakness of voting by mail. They call it granny farming. “The problem,” said Murray A. Greenberg, a former county attorney in Miami, “is really with the collection of absentee ballots at the senior citizen centers.” …The problem is not limited to the elderly, of course. Absentee ballots also make it much easier to buy and sell votes. … Voting by mail also played a crucial role in the 2000 presidential election in Florida, when the margin between George W. Bush and Al Gore was razor thin and hundreds of absentee ballots were counted in apparent violation of state law. The flawed ballots, from Americans living abroad, included some without postmarks, some postmarked after the election, some without witness signatures, some mailed from within the United States and some sent by people who voted twice. All would have been disqualified had the state’s election laws been strictly enforced. In the recent primary here, almost 40 percent of ballots were not cast in the voting booth on the day of the election. They were split between early votes cast at polling places, which Mr. Sancho, the Leon County elections supervisor, favors, and absentee ballots, which make him nervous.“There has been not one case of fraud in early voting,” Mr. Sancho said. “The only cases of election fraud have been in absentee ballots.”
https://www.nytimes.com/2012/10/07/us/politics/as-more-vote-by-mail-faulty-ballots-could-impact-elections.html

Regardless of who you voted for, what is truly galling and insulting is the complete lack of intellectual curiosity or integrity on the part of the main-stream, legacy media.