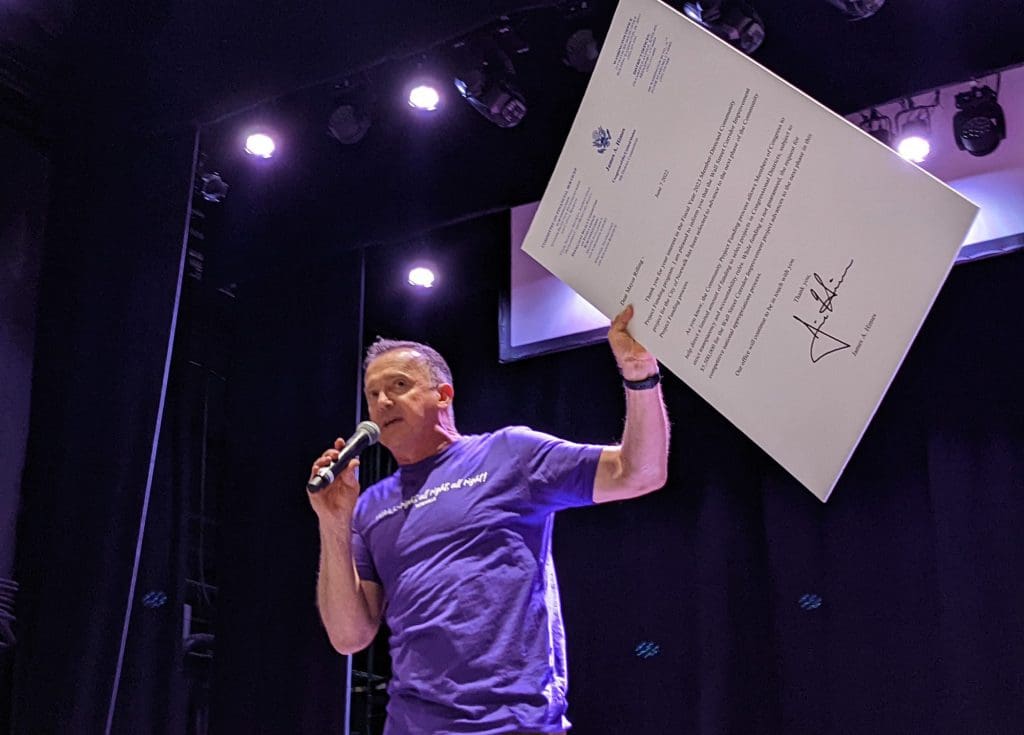 Director of Transportation, Mobility, and Parking James Travers shows off a enlarged version of a letter from U.S. Rep. Jim Himes (D-Greenwich), announcing that he’s seeking $5.5 million for the Wall Street Corridor Improvements Project, Tuesday in the Wall Street Theater. 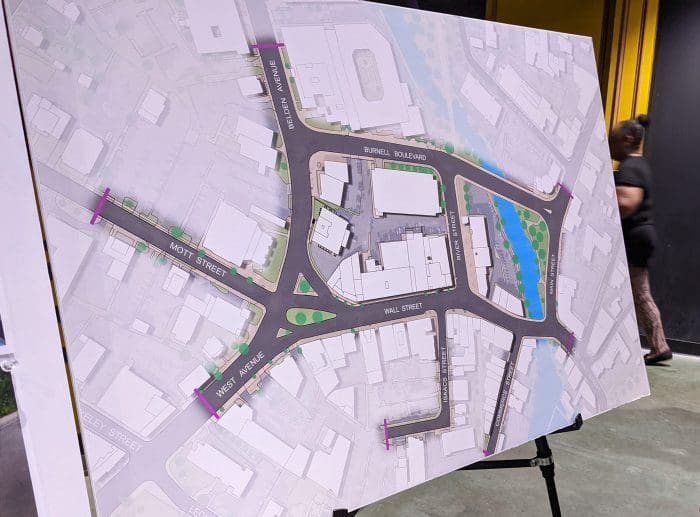 NORWALK, Conn. – Wall Street hopes took the stage Tuesday at the design kickoff for an improvement project that may be supported with $13 million in grants.

To do that right, you need to hear from residents and area visitors, hence the afternoon/evening party with four stations set up for folks to offer ideas and opinions, he said.

“We don’t even have a plan yet. We’ve got people giving money,” Travers said.

Add those funds to the $1.7 million of American Rescue Plan Act (ARPA) funding committed to Wall Street, a $1.5 million State grant that was secured before officials promised sweeping infrastructure changes for the area and $350,000 in capital budget money approved by the Common Council, and you see why Travers has predicted $15 million in improvements.

It won’t be a plan sitting on a shelf, Travers promised Tuesday.

Duff, speaking from the Wall Street Theater stage, said, “We know that, thanks to the efforts of Jim and (Assistant Director for Transportation Services Garrett Bolella), with the leadership of the Mayor and the Council, that so much of this is now going to happen … I can guarantee one thing, something is going to happen and it’s going to be great.”

“We have gone through a period of our downtown not being as energetic as we might all want it to be. But that time today is over,” said Common Council member Nicol Ayers (D-District A). 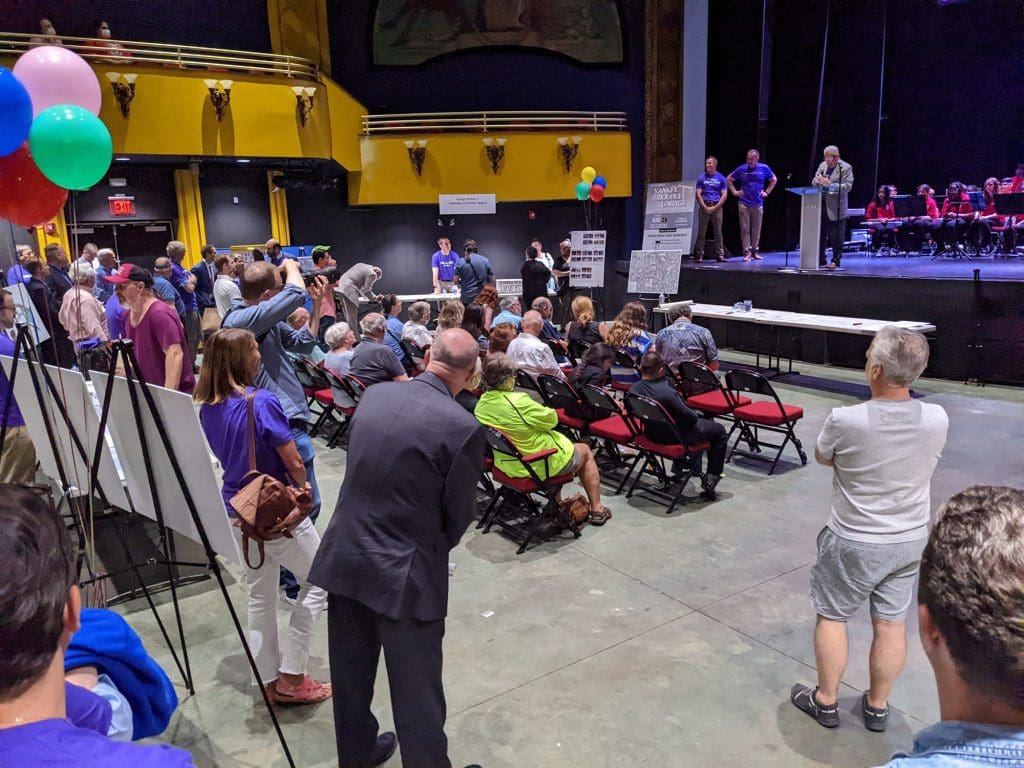 Travers said people came into the theater as soon as the doors opened at 4 p.m. “Looking around at the tables, there seems to be a lot of engaging conversations with people, right. I think people are largely super positive about looking at the improvements that they want. So I think I think it’s all coming together.”

At least 90 people had signed welcome sheets at 5:30 p.m. and visitors were still arriving. 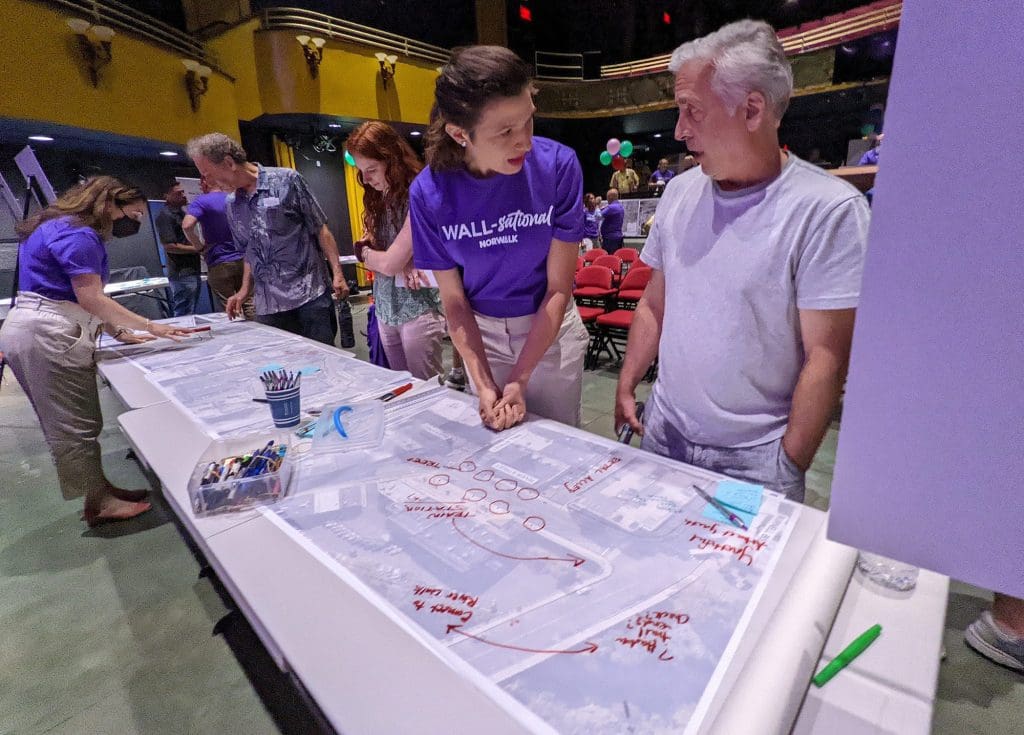 Participants in Tuesday’s “Wall Street Design Kickoff” were invited to draw over area maps to illustrate their ideas. Norwalk Director of Transportation, Mobility, and Parking James Travers said he wanted consultants and City staffers to wear purple so stakeholders could see who to talk to.

“I’m really excited to have the city come together with the neighborhood association and all the different people that have been, you know, laying the seeds of the success,” he said. “We’ve been doing a lot of work over the last five years. And it’s great to see the city coming to the table with a solid plan where we can, you know, focus on what’s right about Wall Street and make it better not just focusing on what’s wrong in the past.”

He noted that Rilling and real estate broker Jason Milligan, who are at odds in a prolonged legal battle, and “all these people” were all “in the same room, and everybody is talking constructively about the future. It’s positive. Everybody in the same room, just kind of a miracle.”

Travers and his team are “so dynamic and positive, they see that they see the potential that we all see, but they seem to have the authority and bring it to fruition,” Alan said.

Travers said that while stakeholders were skeptical when he and Bolella started making the rounds with optimistic plans, “that conversation has changed. I think there is that energy, people see it is gonna happen.”

I would like to see this area of the city fixed I do not understand why it is worth so many millions of dollars to rebuild and redesign it it’s a short little road that in the last 20 some odd years has not had much going on on it it was where you used to go to get recruited for the military. Milligan has done a great job trying to put that area back on track but as far as I can tell everybody else uses it for a public money slush fund. Let’s make sure our money is not wasted because 35 million we can do a lot and come up with something better and more in the public interest not the political play thing it has been for 50 years

Meanwhile, the goose of SoNo keeps laying golden eggs, but you’d NEVER know from all this bizarre obsession with Wall Street. And the goose keeps living despite Harry And The Speculators’ (good band name!) every attempt to wring their corrupt profits from its neck.

Norwalk is becoming a regular pork processing facility.
The trouble with earmarks (thanks, Rep. DeLauro)is that the spending is not a function of the legislative process and pits one community against another. There is only so much pork and there are many hungry mouths.
Good for Norwalk All the charts, posters, shorts and “volunteers” might lift all boats. Or not.

First dibs on restaurant space should go to existing local small businesses elsewhere in town instead of corporate chains.

1. If those restaurants made it through the onslaught of Covid then they certainly have a local following.
2. A high density of restaurants and bars would give all the people in the new apartment buildings along West Ave someplace to walk to.

Ideally it would have been nice if we weren’t spending the $1bn plus on the Walk Bridge and could instead pump a fraction of money into the north harbor area along with Wall Street.

Why don’t you sink a bunch of the money and pave the roads and paint new lines there. then in a few months dig it up with road construction and then you poorly patch those to have beautiful pot holes and trenches like they do all around Norwalk

My husband and I attended last evening’s Wall Street improvement project open house. We found it festive with lots of activity and positive energy. Residents and business owners were encouraged to share ideas, most being spot-on for Wall Street updates.

To me, it makes sense to invest in a substantial face-lift in terms of lighting, pedestrian/biking friendly road design, outdoor dining, and open spaces for events and performances, along with a healthier natural environment and access to the river.

What I sensed from yesterday’s open house event is a collective vision that is community-centric with the type of projects and recipes that have enhanced downtowns across the country. Sono received this sort of attention (I know it ran artists out, similar to Soho in Manhattan), which created a vibrant downtown, not perfect, but a lively destination. Wall Street, Norwalk’s other downtown, could retain the artist-friendly atmosphere and that seems to be the desire of those who attended the open house as well.

I think we need a few more hair cutting places, and some more Latin restaurants with mirrored glass. With all the apartments within walking distance, why hasn’t demand outplayed supply for businesses in the area?

The ironic part is we hold the rally in the theatre where the owner screwed the vendors and hard working people that rebuilt it out of hundreds of thousands of dollars by not paying them. Families are dying to bring their kids to school here Mayor? Is this why Senator Duff is asking for our kids to go to Darien? Comical at best.

Tysen is spot-on. How did that theater turn out and at what cost, not just to Norwalk, but to all state residents? Proof, again,that realtors only extract wealth for themselves first…the rest is chance.

I can see from reading the comments there’s a lot of cynicism in our town and the democratic mafia party has not done a good job🥵👎🏽 I’ll leave it at that!

Though I was not able to attend this event, here is my input:
– please, please do something about POKO *now* (why was this not even mentioned?)
– can something be done about the numerous people urinating along the walkway along the Norwalk River next to the Confluence (formerly Avalon)? It’s a beautiful walkway, but not the stench!