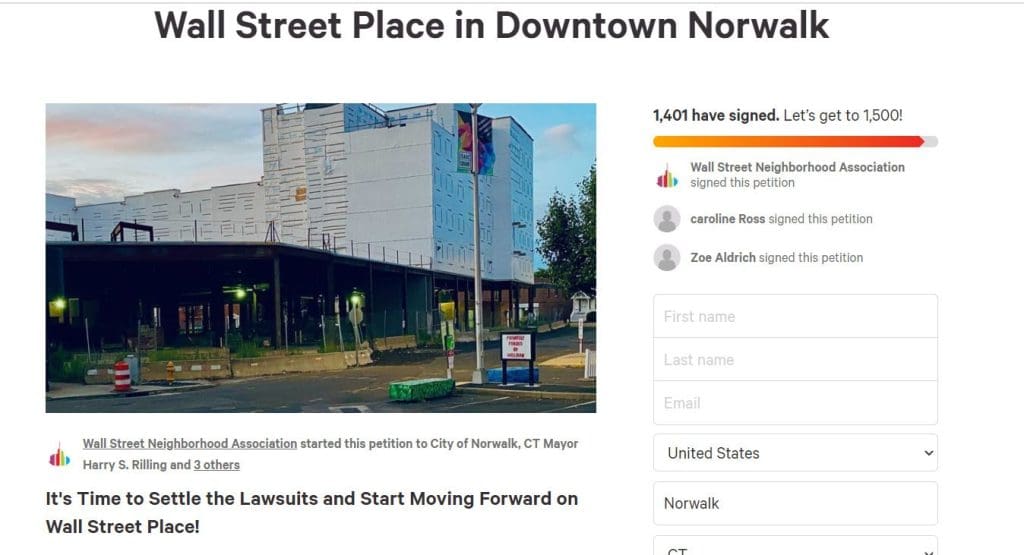 A screengrab of the Wall Street Neighborhood Association’s petition.

NORWALK, Conn. — Nearly 1,500 people have signed a petition urging the City and Norwalk Redevelopment Agency to settle the lawsuits swirling around Wall Street Place, a.k.a. “POKO.”

Court-assisted mediation would be non-binding, “so there is nothing to lose by trying,” the Wall Street Neighborhood Association states in its petition. “Who WINS if there is an agreement? Downtown Norwalk!”

Real estate broker Jason Milligan has been publicly pressing the City and Norwalk Redevelopment Agency to enter court-assisted mediation in the “main” lawsuit, the one stemming from Milligan’s purchase of POKO properties. Norwalk Corporation Counsel Mario Coppola said recently that the public parties will not enter mediation without a written offer from Milligan, and Milligan is refusing to provide one.

Milligan said Tuesday that he’s made many detailed offers in writing. The most recent one was last winter, he said.

The plaintiffs made a settlement offer in March. Milligan had 30 days to accept the offer, according to state statute. He did not.

The Wall Street Neighborhood Association (WSNA) takes note that a trial isn’t scheduled until early 2022. Meanwhile, the neighborhood is struggling “to overcome the blighted eye sore of the failed POKO construction project,” WSNA states, alleging that not only is the “Tyvek Temple” suppressing local business, it’s infested with rats and other wildlife.

The Redevelopment Agency plans to make a move to end the POKO lawsuit in their favor without a trial, by filing a motion for summary judgment, Attorney Joseph Williams said.

Construction on Wall Street Place halted in 2016. A new application is in front of the Zoning Commission, as JHM Group seeks approval for revisions to the project, which include demolishing the (closed) Garden Cinemas and building a parking garage on the property, in addition to more apartments, for the mixed-use development.

This parking is needed in lieu of the parking that would have gone on one of the properties Milligan bought. Milligan has been telling Zoning not to approve the proposal and promising to challenge an approval in court.

In a related lawsuit, Milligan has sued the Redevelopment Agency and challenged the Wall Street-West Avenue Neighborhood plan, which was passed last year. He’s suing Citibank, POKO’s owner, and challenging an easement behind the Fairfield County Bank, which he bought a year ago.

Attorney Marc Grenier recently said that fees for outside counsel in the POKO lawsuit were $865,023.73 as of Dec. 1. Redevelopment has paid another legal firm $5,000 to defend it from Milligan’s challenge to the Wall-West redevelopment plan.

In July, Common Council member Tom Livingston (D-District E) publicly stated that he hoped the City would be able to sit down with Jason Milligan and “work towards a mutually satisfactory resolution” to the ongoing litigation. Livingston did not reply to an email asking about the petition.

Mayor Harry Rilling deferred to the legal department. City lawyers did not reply. The City has said multiple times that it won’t comment on ongoing litigation.

Milligan has lost recent battles in the lawsuits but claimed they were not significant.

On Dec. 1, the new judge in the cases, Sheila Ozalis, ruled against yet another Milligan attempt to dismiss the POKO lawsuit through a motion for summary judgment. Milligan said, “It is a well known fact that summary judgement is seldom granted in the state of Connecticut. Nonetheless there are reasons that it made sense for us to file it.”

On Dec. 3, Ozalis tossed the “tort” claims Milligan made in his quest to block the Wall-West plan, allegations that he’s been harmed by the Redevelopment Agency. Attorney David Rubin, representing Milligan, said the challenge to the plan itself remained.

On Tuesday, both sides in the POKO lawsuit filed a joint stipulation agreement, certifying that all Milligan defendants, including Milligan personally, will pay equally if one of them is found to be liable to the plaintiffs for damages. In return, Milligan was let off the hook on providing financial information that had been sought by the plaintiffs.

That was another battle lost for Milligan: Ozalis ruled against his most of his attempt to block the discovery requests.

Answering questions Tuesday, Milligan remained focused on Coppola, writing that he has refused to be limited to “Mario’s narrow terms and narrow-minded thinking,” and “I do not believe Mario is negotiating in good faith which is why I think having a judge in charge of mediation could be worthwhile.”

The petition was posted last week and had 1,401 signatures as of 1 a.m.

“Its painful as a Norwalk citizen and tax payer to watch this stupidity continue,” wrote one signer, Jordan Grant.

“I am signing this petition to get things moving faster in the Wall Street area. This has been a 14 year project with nothing to show but moving backwards,” wrote Willard Lawless.

“As a former trial attorney in NY and CT, I wholly endorse mediation as a viable, more effective and less expensive way to resolve lawsuits,” Barbara Curtis wrote. “There is no downside. Period.”

Updated, 5 p.m.: Sentence removed; Mr. Milligan said he misunderstood a question he’d been asked and the statement was therefore incorrect.

What a fiasco, being that I worked in construction / contracting in Bridgeport for several years I can say this is truly messy, reflects how POKO operates. And now Norwalk too.

The above article states that mediation would not be binding so what’s to lose. Another round of going nowhere. that’s what. However, Mr. Milligan has asserted that the gain would/could be:
1-Each side would have to present their side in a cogent form
2-The opinion of an independent mediator could point the way for future resolution.
Maybe yes. maybe no. But nothing else positive is going to happen for quite some time. We have had an entire presidential term pass since construction stopped. The only ones benefiting are the lawyers who keep making money as long as this is NOT resolved. Where is the leadership in this matter? It seems better than nothing! Let’s do it.

I think the mayor and his crew should negotiate a deal with Milligan. Before they do any other development in the city. Born and raised in Norwalk the downtown area (poko) is and has been a disaster for Norwalk! Let a local developer do it!