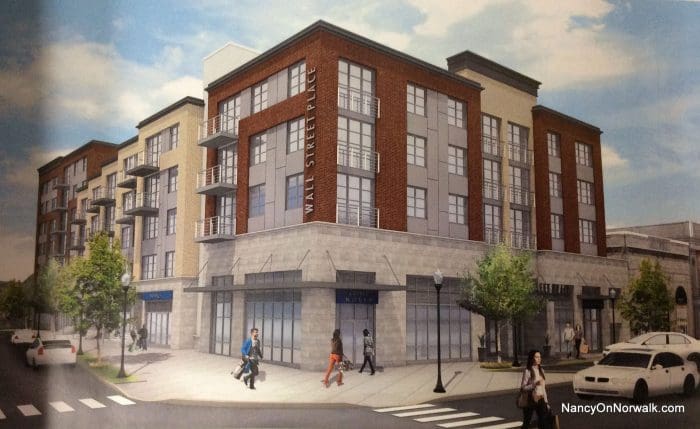 An artist’s rendering of the redesigned Wall Street Place. Construction will start Friday, according to Ken Olson of POKO Partners. Equipment was being put in place on the property, he said. A backhoe was parked there Thursday afternoon (see above.)

“We will be mobilizing today and tomorrow. We will start digging tomorrow and we won’t stop until we are complete,” Olson said Thursday afternoon.

Norwalk recently declared POKO in default of its Land Disposition Agreement with the city because it had not closed on its construction loan with Citibank, the last piece of its financing puzzle. The Redevelopment Agency on Tuesday held an executive session to discuss Wall Street Place.

Asked for the status of the development, RDA Chairman Felix Serrano would only say, “We are hopeful that it will be closing as expected.”

Olson said the loan will close on the 26th or the 29th. He’s confident that will happen and he is going ahead.

If Olson’s confidence is rewarded, Wall Street Place would be undergoing construction right down the road from the construction of Head of the Harbor South, which is expected to begin soon.

Last August, Common Council members and agonized over whether to grant POKO an extension to the LDA. Mayor Harry Rilling argued that not granting the extension would send the matter to court, and Norwalk’s case would be weaker without giving Olson this final opportunity to get the project built.

“We are very, very happy to see that the project is moving forward,” Rilling said. “We have been meeting with the developer to assist in any way that we possibly can to get this started.”

Rilling, who is running for re-election this fall, promised in his last campaign that he would meet with developers in a proactive way.

Well done Poko. Maybe you’ll get a loan on the 26th or 29th – just 12 years later. And great job by the Redevelopment Agency for going with Poko in the first place and executing an LDA agreement that had the taxpayers’ backs.

Maybe some of Norwalk residents can get jobs there as laborer or will they come from out of town/State, this would make Mayor Rilling look really good since he had the Trade job fair.
Hey Martha Dumas what can you push?

There was No one digging anything – that we saw.

Just another round of BS from Poko !!!!!