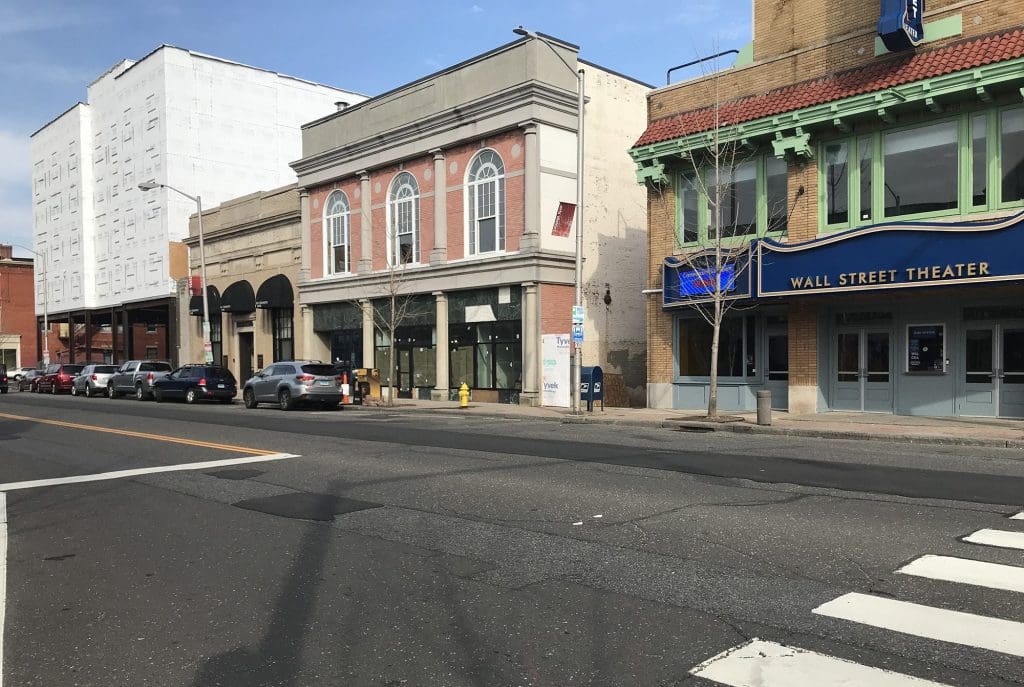 At right is the Wall Street Theater. At left is, depending on your sensibilities, is “POKO,” Wall Street Place phase I, or “The Tyvek Temple.” In between are the Fairfield County Bank buildings, owned by real estate broker Jason Milligan, under IJ Group LLC, since December.

NORWALK, Conn. – An alternative proposal for Wall Street Place phase I, otherwise known as “POKO,” would provide “a large gathering area able to accommodate events like the Mayors Ball.”

Frank Farricker’s non-profit arts district idea relies on financial calculations which assign a $10 million value to the existing building and estimate the cost to complete its construction as $15 million.

“Led by the Wall Street Theater, a 501(c)3 nonprofit, we propose a financially viable plan in which four properties adjacent to the POKO project, plus the project itself, are merged together into an innovative, exciting and achievable project which would preserve and expand arts in Norwalk,” the proposal states.

Farricker last week told NancyOnNorwalk that he had made this proposal to City officials, an alternative to the 100% affordable housing plan reportedly developed by Citibank and JHM Group. It would feature 40% affordable housing. On Thursday, he released the “final” proposal, which he said was approved this week by the theater’s board of directors.

The property at 20 Isaacs is owned by John Dias, who is suing the City and the Norwalk Redevelopment Agency. He claims to have been damaged because 20-26 Isaac St. were slated for eminent domain if he could not agree on a purchase price with POKO Partners, original developer of Wall Street Place. Dias signed a contract with POKO to sell the property for $2.5 million, but the sale was not completed, the complaint states.

Construction on Wall Street Place halted in mid-2016 due to a budget gap described as more than $9.8 million. Citibank, which granted POKO a $31 million construction loan for the project, took possession of the property. Citibank has chosen JHM, led by John and Todd McClutchy, as its expected redeveloper.  Norwalk declared Citibank in default of its obligations and the matter is in court; the resultant plan is said to include demolishing the Garden Cinemas to provide needed parking spaces.

The Dias properties were slated to be demolished and a street constructed in their place, as part of the 2008-approved plan. 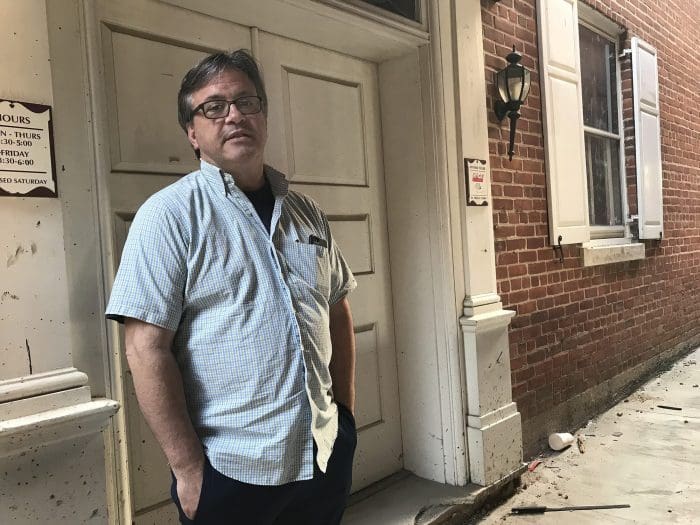 The $10 million estimate came from “direct conversations” with Citibank, Farricker wrote to NancyOnNorwalk.

“The $15 million estimate is an aggregate of the multiple people I spoke with regarding the work, from the original contractor, to what Jason Milligan thought, to an estimate by a friend of the theater,” Farricker wrote to NancyOnNorwalk.

Milligan, a real estate broker who has bought properties around the project and toured it last year with Citibank representatives, said Thursday that he couldn’t estimate how much it would cost to complete the existing project due to “too many” rules and regulations of which he is unaware. It would cost $200,000 to knock down the concrete and steel “podium,” the “roof of the retail and floor of the area that gets framed for apartments,” he wrote.

Citibank rep Jeremy Johnson in a July email to Milligan said he “definitely” couldn’t see the project being completed for $15 million.

“I think the land and the building skeleton is worth about $3 mm today,” he wrote Thursday.

Milligan said Thursday that he offered Citibank $7 million for the property last year, with several conditions. His lowest offer was $3 million, with no contingencies.

“Frank’s plan is a pipe dream,” Milligan wrote. “He would make a good consultant but not more at this point.”

“Needless to say Frank’s plan is a little sketchy,” former Mayor Bill Collins wrote Friday. “There are a number of moving parts which would have to be evaluated individually which I certainly am not in a position to do. For one thing it seems to suggest that Citibank would get out of this mess without further loss which, from the City’s standpoint, does not sound like a reasonable solution.”

Farricker’s Wall Street Theater opened in April 2017 in what had been the dilapidated Globe Theater, after a renovation that began in 2015, supported by state and federal tax credits. A lawsuit filed in October 2017 by The Morganti Group, which did the construction, prompted the theater to file for Chapter 11 bankruptcy in early 2018. The Hour and the Fairfield County Business Journal report that the theater resolved the bankruptcy in February, quoting theater President Suzanne Cahill as saying, “we’ve come out of it stronger and more financially solvent.”

The Morganti lawsuit was withdrawn in March.

“Morganti settled for exactly what we offered two years earlier… we heard they spent millions on legal fees,” Farricker said.

“The public parties (City / Redevelopment Agency) reserve comment on Mr. Farricker’s proposed concept until the required site control to implement it is better understood,” Redevelopment Agency Executive Director Tim Sheehan wrote in a Thursday email.  Sheehan did not respond to a request to elaborate on what he meant by “site control.”

There are lawsuits concerning the POKO properties, that are far from being resolved.

“The cost to pay Citibank and complete the unbuilt project exceeds any profit-motivated or developer fee-driven plan and would also require significant state and City subsidies,” the proposal states. “… Norwalk would like the City to complete its pledge, memorialized in signs placed on Wall Street by the City, for the area to be Norwalk’s ‘Arts District’.”

Farricker, president of Exit Realty, said last week that he’s built affordable housing and when it’s 100% low income, “You get your fees, you get your money, you get your stuff and you get out.  That’s what happens: (McClutchy will) get development fees and fees for the tax credits, and fees for the construction, and all the stuff like that – and then they are gone.”

Better title for this story “Fantasy Baseball – Wall Street Edition”. Anyone who thinks there is a simple fix to POKO is off their rocker. Even in today’s stories Nancy gives opinions of three developers – Kinol, Farricker and Milligan – who all say they have a plan and the others plans can’t or won’t work. Let’s recap:
1. Farricker who nearly bankrupted his project, got run out of NY for his sketchy affordable housing projects, and had some questionable activities during his time with the CT Lottery says he can buy the property, finish construction for $15m and do underground parking for $2m. He says he can buy it for $10m.
2. Milligan – the master of the the Wall Street game playing says Farricker’s plan is a pipe dream and not doable. He says he would buy it for $7m. Oh and he also says he has a mystery nonprofit to buy the cinema and keep it open.
3. Kinol says underground parking can’t work and construction costs are nearly double Farricker’s estimate. He says he would buy it for $3m and knock it down.

These guys seem to forget the property is owned by Citibank and Citibank has to agree to any price. Previous stories reported they value it at something like $20m.
I’m sure Citibank would love to get out of this mess and walk away – all three of these guys have said they’ve talked to Citibank – how come no movement if their plans are so doable?? My turn now. I’ll buy it for $50, provide 600 free parking spots, a new library, an ice cream shop, but don’t worry no new apartments (apartments – too many people spending money BAD), no stores (retail is dead haven’t you heard BAD), no children allowed (more school kids BAD), and nothing that will bring outsiders to the neighborhood (traffic BAD, BAD, BAD!).
Next up “Fantasy Sports – walkbridge edition”. Can’t wait.

Citibank should be reaching out to the people of Norwalk to solve this. Instead theybhide and try to force their losses on the people.

Until there is enough pressure against the owner of the property then nothing will happen.

And just so it is clear I do not really want Phase I, and my 1st choice would be to see it torn down.

Mr. Farricker’s proposal is the best one yet. A no brainer. Hope it will happen.

Interesting. There are many good ideas on how to fix POKO. Makes you wonder why our city Advisors (Tim Sheehan and Mario Coppola) are steadfastly in favor of the McClutchey deal.

The McClutchey deal basically bails Citibank out while burdening us, the Norwalk Taxpayers, with the bill.

Personally, I’m in favor of the City of Norwalk tearing up the LDA and just walking away. This will push Citibank to sell the building at a market clearing price.

That process will result in the best “market rate” deal that conforms with Norwalk Zoning.

Bottom line – until you demand better from your government, this wasteful “process” of stiffing the Norwalk taxpayer will continue. Contact your Council Rep. and let them know what you think.

Good Things are happening on Wall Street – come and be part of the change.

Farriker’s ideas for Wall Street’s POKO are definitely worth a look. Are they financially untenable? Norwalk should be vigorously vetting suggestions like Farriker’s. City of Norwalk, Rilling should be finding a better way out of this POKO calamity than settling for the McClatchy’s proposal which will condemn Wall Street to insignificance for another 60 years.

There was no reason for Downtown Wall Street to be a undervalued wasteland for 60 years except for years of weak, unimaginative city leadership. There is no reason Downtown Wall Street should continue to be an undervalued, uninspired drive through for another 60 years because of weak, unimaginative city leadership.

No good choices with this group…

Norwalk has unlimited potential for greatness. A small diverse coastal city offering all manner of amenities including easy access to a world capitol (NYC) and the natural wonders of New England.

So what do we have?

We have illegal apartments, unchecked dangerous driving, a wretched under-used downtown, Sono’s drunk circus, overpaid police flagmen, unfettered pollution, a federal jail on a residential street, city contracts awarded to a tax-delinquent company, and The Final Shopping Mall to be built in the U.S.

Because the citizenry barely even notices! Too busy to pay any attention. Roughly 20% of eligible voters voted in the last election. 20%! No wonder we have such a mess! City Hall incompetence and ineptitude will worsen unless people wake up.

Knock it all down and build a beautiful park. Green space with benches, flowers. Why not. Make Citibank pay for it with the money they owe for the blight they’ve become responsible for.