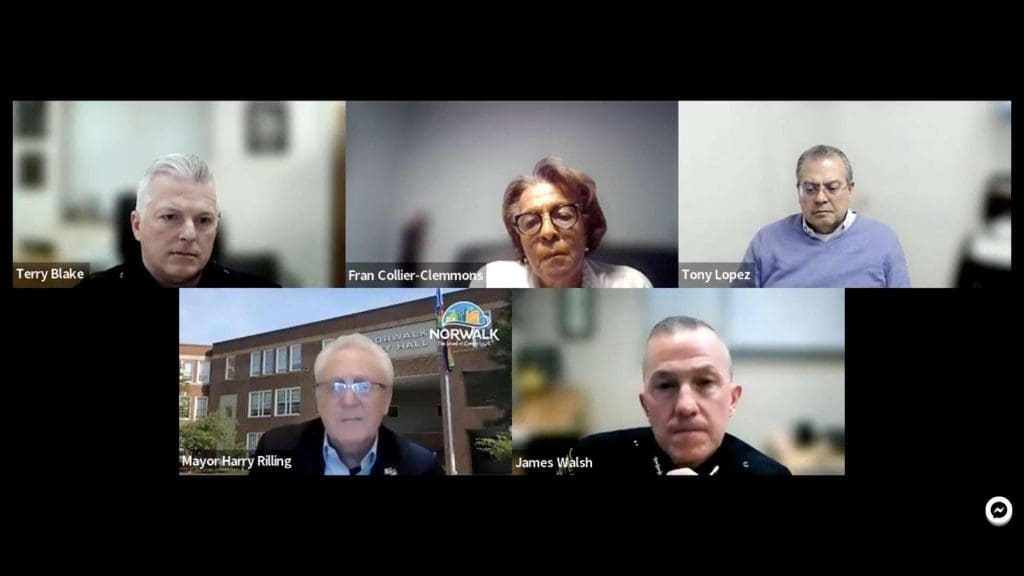 Norwalk Police Chief James Walsh has served with the Norwalk Police Department since 1988, having begun his career as a patrol officer working in a variety of capacities including Community Policing, Mountain Bike Patrol and the Marine Division, according to the City’s website.

He was promoted to Deputy Chief of Operations on June 28, 2018, then made interim chief in late December after Thomas Kulhawik retired after 10 years as police chief.

“During Walsh’s tenure as a Norwalk Police Officer, he has earned several awards and medals for his bravery, professionalism, and exemplary service: Officer of the Month (July 2017), Officer of the Year (2005 and 2012), Police Service Cross (three times), Medal of Merit, Distinguished Service Award (seven times), and Unit Citation (three times). Chief Walsh has also participated in the development of programs within the Norwalk Police Department, such as the Tactical Response Team, Peer Support Team, Honor Guard and Advisory Board,” a City news release said.

“Deputy Chief Terrence Blake was hired in October of 1998 and dedicated the first five years of his career to the Patrol and Community Police Divisions. This assignment was followed by appointments to the Special Services Division (2003) and the Federal Bureau of Investigation Safe Streets Task Force (2006). In 2006, Deputy Chief Blake was promoted to Detective, and in 2009, he was reassigned to the Detective Bureau. From there, he was appointed to the United States Marshals Service Violent Fugitive Task Force. In 2013, Deputy Chief Blake was promoted to Sergeant and was assigned first as a supervisor in the Patrol Division and then to the Community Services Unit. In 2015, Deputy Chief Blake achieved the rank of Lieutenant and spent the next few years commanding the Patrol Division Day Shift, Community Police Services Unit, Special Victims Unit, and Combined Dispatch.

“The community is truly in good hands under their leadership,” Mayor Harry Rilling said in a statement. “Chief Walsh has been with the department for 35 years and his rise through the ranks is a testament to his commitment to Norwalk and his strong sense of duty to the community. Deputy Chief Blake has been with the department for 25 years and has also shown a deep sense of dedication towards protecting and serving the community. The City of Norwalk is fortunate to have their leadership and I wish them all the success as they take on these new leadership roles.”

Reached by NancyOnNorwalk, Norwalk Branch NAACP President Brenda Penn-Williams said she thought the appointments were good. She understands that Deputy Norwalk Police Chief Susan Zecca is retiring soon and, “I expect them to hire a minority.”

Rilling confirmed that Zecca is retiring.

“I can’t speak more highly of their professionalism,” Spahr said.

Walsh thanked the Commission and called it an honor.

Rilling said, “I think we’re going to see some wonderful changes, wonderful things that will be happening over the next period of time.”

Congratulations Jim. Just remember you’ve been on the streets and it’s not easy.

Congrats to Jim Walsh and Terrence Blake. Its nice to see two officers make it through the ranks and reach the top. Good luck.