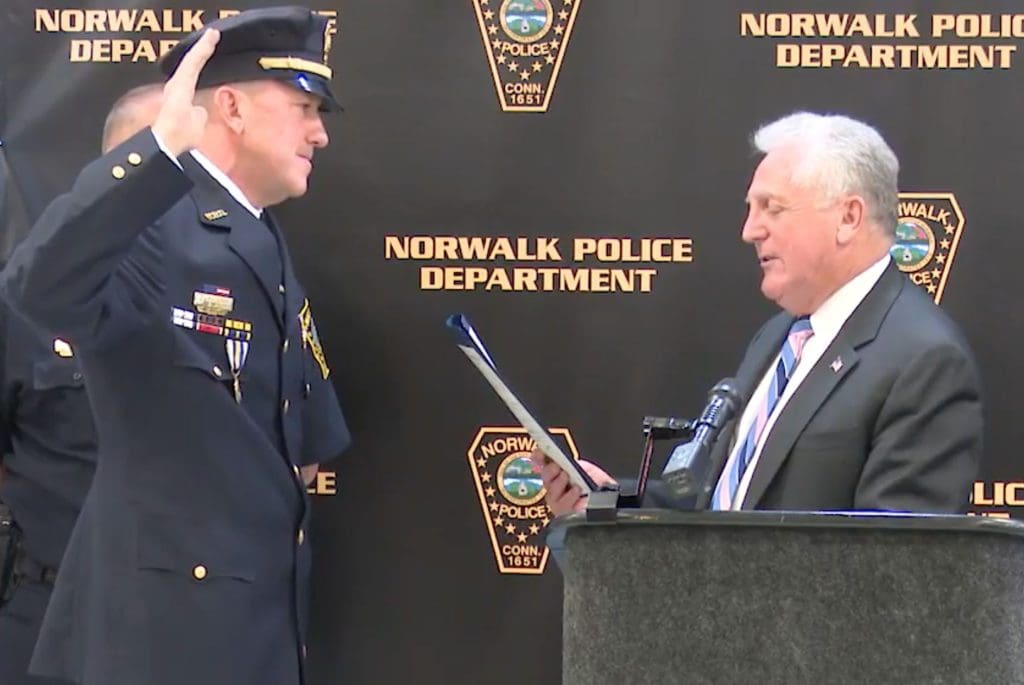 “It’s always nice when you have an opportunity to promote … from within the ranks of the department,” Mayor Harry Rilling said before administering the oath, calling Walsh “highly respected.”

“Deputy Chief Walsh started his career with the Norwalk Department of Police Service on July 7, 1988,” a press release said. “He has had several assignments over his career to include the Patrol Division, Marine Unit, Community Police Unit, Statewide Narcotics Task Force, Special Services Division, Detective Bureau, Honor Guard and Emergency Services Unit Tactical Response Team. Deputy Chief Walsh was named the Norwalk Department of Police Service Officer of the Year in 2005 and 2012 and received numerous commendations and awards throughout his career. Deputy Chief Walsh holds a Bachelor’s of Science degree in Criminal Justice from Sacred Heart University and resides in Norwalk with his wife and children.”

“It’s nice to see somebody rewarded for doing a lot of good work for a lot of years, and being recognized for it,” Chief Thomas Kulhawik said.

“It makes me proud as a Commissioner to be able to promote someone like this,” Police Commissioner Charlie Yost said. “Who’s got the courage, the professionalism, the integrity, as you do, all the officers in this department.”

“It’s always nice when you have an opportunity to promote … from within the ranks of the department,” Mayor Harry Rilling said before administering the oath

No Harry..It would be nice to hire someone from the outside for a change that never worked under you. This way they could see what a disaster the Norwalk police department is.

What a miserable disappointment good ole Harry always will be.

i remember when this guy put my friends face thru a plate glass window on Washington street one night.