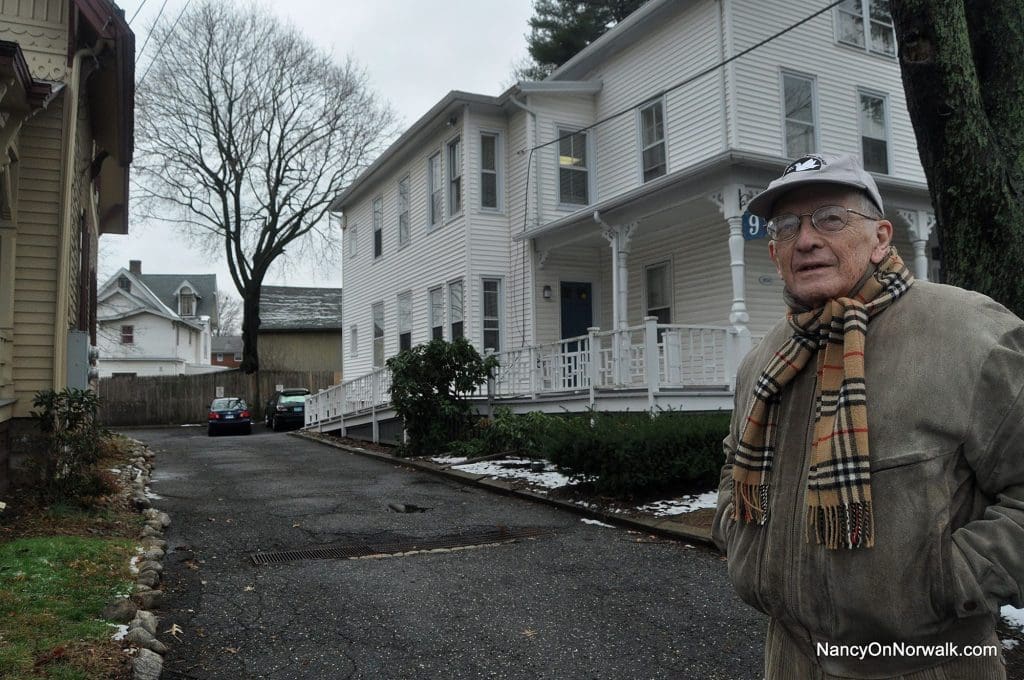 Former Norwalk Mayor Bill Collins stands in a Berkeley Street driveway between a house he currently owns (left) and a house he formerly owned (right). He identified the white house straight down the driveway as former Mayor Frank Zullo’s childhood home. Mayor Harry Rilling lived in the house behind Collins until he was about 9 years old.

Down the road from where the late former Mayor Jennie Cave retired to.

This means that four of the seven people who have been mayor since 1975 lived in the same block, at one time or another. Three of them within a little nexus, where the properties touch each other.

“I think that’s pretty significant. I mean, that’s going to raise the property values there as soon as you write the story,” Zullo quipped, confirming the story.

“Coincidence. Unless there’s something in the air here. One of these trees may have something,” said Collins, who brought this to the attention of NancyOnNorwalk.

Collins and his former wife “got a deal” four decades ago and bought 7 and 9 Berkeley Street for “very little cash down,” Collins said. They lived in the first-floor apartment at 7 Berkeley until they split, and she got 9 and he kept 7. What was her house is now all apartments, he said.

That is the house that Rilling lived in until he was about 9, Rilling confirmed. His family owned it and rented out the upstairs, he said.

“I used to watch Frank Zullo every weekend in his tuxedo carrying his trumpet as he was getting ready to go out to play a gig to put himself through college,” Rilling said.

Zullo said his family moved to the Elm Street house when he was about 4. That property abuts “a little piece” of Collins’ house, in the back, he said. 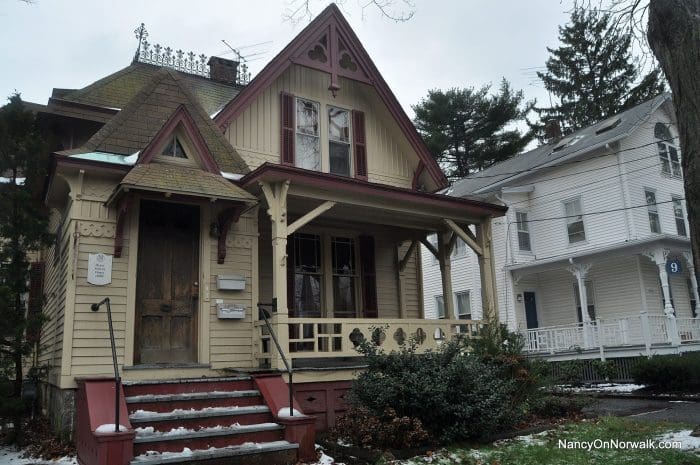 This house at 7 Berkeley St. has been owned by former Mayor Bill Collins for 40 years, he said.

When the Collins couple bought the houses, Zullo’s brother still lived there and owned the house, Collins said. Collins and his wife had lived in an apartment on Elm Street, across from Zullo’s house.

“I remember rolling the refrigerator on a hand truck around the corner, having some strong guys help get it into the house,” Collins said.

Plus, “By chance Harry, Frank and I all at one time or another attended Jefferson School,” Collins said.

Rilling said he walked to Jefferson. That was before Route 7 was built, when Van Buren Street was level with Union Park, and he hiked up a “huge hill” to get to school, he said.

Cave, who preceded Collins, “settled down” after being mayor and moved into an apartment at 1 Leonard St., he said. That’s on the corner opposite Berkeley and West Avenue.

“Doesn’t look like much of a neighborhood, but just by chance,” Collins said. “… It’s a great little neighborhood. I wouldn’t mind living here again.”

Good for one of the central neighborhoods of Norwalk. I love the time period that the homes were built and how they are still rental producing properties to this day.