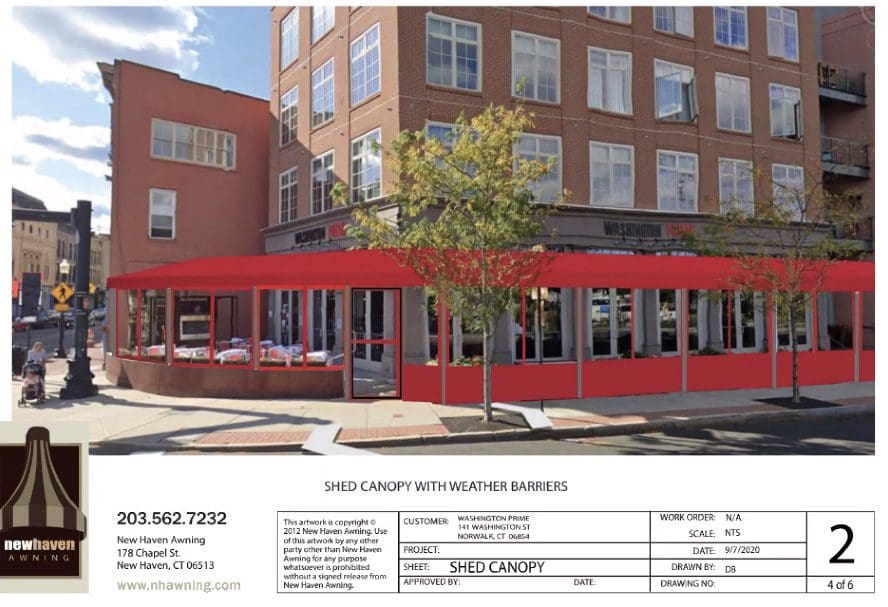 A rendering of the Washington Prime plan, as shown to the Norwalk Zoning Commission on Thursday.

NORWALK, Conn. — When Gov. Ned Lamont began relaxing restrictions following the state’s shutdown due to COVID-19, one of the first items allowed in May was outdoor dining. Restaurants across Norwalk and the state began erecting tents, spacing out tables, and creating outdoor spaces.

Washington Prime, located at the corner of Washington and Water streets, can make its outdoor space permanent, thanks to approval from the Zoning Commission on Thursday.

During the colder months, the outside area will be enclosed with WeatherTech siding that keeps in the heat, co-owner Rob Moss said.

“The lining, and everything, the technology that’s put in place is called WeatherTech,” Moss said. “It’s a fully, you know, heat proof, weather insulated fabric that’s used with a kind of a plexiglass style window, we do have emergency exits for egress … So we’re essentially just enclosing this area. And then within the underbelly of the canopy, we’re going to be doing heaters as well as heat blowers that circulate air.”

Moss said that the restaurant was spending about $80,000 to add better ventilation, heaters, and other equipment, as well as the WeatherTech enclosed tent area, to make patrons feel safe. They’ll also be keeping capacity at 50 percent even as the state will allow up to 75 percent capacity on Oct. 8.

“Even on the inside, on October 8, we’re going to leave it at 50 percent capacity as opposed to going to 75,” he said. “We want to continue to have diners feel safe.”

However, Commissioners noted that Washington Prime owners are in a unique situation because they own a large outdoor area on their own property. Other restaurants, particularly those along Washington Street, don’t have the same ability, because their temporary outdoor seating is on City property.

Commissioner Joshua Goldstein asked if there was anything the Commission to do to help these restaurants out as the weather got cold.

“My concern is for, you know, a lot of other restaurant tourism, small businesses who perhaps want to take these measures in terms of, tents and setting up things for the colder months,” he said.

Chairman Louis Schulman said that they could make the process as easy as possible when applications came in, but the ability to continue to allow tents and other structures for dining on the public sidewalks was up to the city.

Moss, who also said he was thankful Connecticut was getting set to enter phase 3 of its reopening, advocated for the city extending its order to allow restaurants to keep their outdoor spaces.

“The nice thing about SoNo was that we’re all friends down here, we all want to see —high tide raises all boats here and for the city to you know, but I think that that’s the question they’re wondering, too,” Moss said. “For the people who don’t [own their own outdoor space], who desperately need some sort of fix here—where they can put something, whether it be in a tent like this with walls on it on that sidewalk and keep that barrier, that is something that everybody is searching for. And we’ve been trying to talk to the Mayor and talk to everybody about it. Because, as you said, it’s getting cold and everybody’s looking for an answer.”

Planning and Zoning Director Steven Kleppin and Schulman said the Department of Public Works would have to first say if they would allow for the sidewalk extension into the road to continue for the fall and winter months, or if that would cause issues for plowing. There also could be some liability questions when it comes to adding heaters or more permanent structures that would require affixing to the sidewalk, Kleppin noted.

“We have had inquiries from two other operators looking to do something similar to this where it’s more of a permanent fixture versus the temporary tent that we’re seeing in other places,” he said. “We’ve expedited those permits when they come in, and we’ll help them. The other conversation that I haven’t gotten the firm’s answers on the City side yet is for all the businesses on Washington Street—the City put out the barriers to technically move the sidewalk into the street … Is Public Works going to be OK with those barriers being up all winter? That conversation hasn’t been finalized yet.”

Moss said that from the restaurants’ perspectives any help and decisions that could be made as soon as possible would be appreciated, because the weather is starting to get colder and they’re already starting to see impacts on their business.

“Today’s probably our last nice day, to be honest—tomorrow, the weekend is going to be, 60 degrees, as the high and down in the low or the high 40s,” Moss said. “And, you know, we’re seeing that. I talked to a bunch of restaurateurs today, whether it’s George over at Il posto or Matt at Match or even Richie Ball at Donovan’s, our reservations for this weekend are very light. We’re going to start to feel it this weekend.”

I’ve been recently thinking about this since a trip to the city.

Back at the very beginning of the quarantine, I remarked (after visiting the Netherlands) that this may be the birth of American sidewalk/outdoor cafe culture. Which would be really cool!

But setting aside my personal feelings about it, it’s pretty obvious that after spending most of a year locked down, restaurants will *demand* that cities let them keep their new floor space. Even if all indoor space is reopened, the restaurants will still insist that they are owed some sort of medium-term accommodation to allow them to recoup their losses.

And that logic will be pretty hard to assail both morally and economically, especially with a sympathetic public. Which means they’ll get their “temporary” arrangements. And once they get those, people will start asking: “Why don’t we just put some extra asphalt under this patio to make it more even? How about some better-reinforced barriers against cars?”. Restaurants will start putting up more permanent decorations to spruce up their spaces (NYC already has this going on WAY better than SoNo, by the way). Eventually, we’ll start ripping up roads, pouring new concrete sidewalks, and installing awnings.

Not saying this is good or bad, it’s just a thing that’s going to happen. I hope Norwalk is equipped to deal with it in an equitable manner. We could end up with some really beautiful, vibrant neighborhoods. Or some ugly ramshackle hodgepodges. Or just see our streets deserted because we didn’t take advantage of a clear opportunity.

Maybe Make Washington street one way to accommodate parking garage. Then use one lane for pedestrians, and sidewalks for restaurant cafe.

@David — There must be something in the air these days. I couldn’t agree with you more. The city should look into closing traffic to Washington Street and developing a pedestrian mall. We’re going to need to re-energize SoNo sooner rather than later. By my count, 40% of storefronts are boarded up right now. That’s not a good thing. Let’s continue to think outside the box. I hope our city officials are listening.

@John – I think the main problem with closing Washington is the bridge. Haviland and Water would see a lot of other traffic.

That said, I’m not opposed on principle to the pedestrian mall concept. We already see it every year with the Sono Arts Fest, and it works pretty well.

I think the big fight will be over whether to make Washington one-way – ideally, eastbound, since Haviland is westbound. But more than that, we need to get that thug Rilling out of office and let the permitting gates fly open. We desperately need to bring more businesses back in to SoNo. Anyone with an idea and a shoestring budget should be allowed to give it a shot; we shouldn’t be quibbling over details like uses. Let them come in and succeed or fail; the successes will accumulate and help rebuild the neighborhood economy and drive foot traffic for more restaurants and other anchor tenants.

In order to facilitate that, we should probably make the big C-town lot free during certain hours, or allow businesses to validate parking there. Same for liberty square. This big parking contract is an albatross around the city’s neck. We’ve already seen what free parking for residents can do at the beach. SoNo should be next.

In other words, I may be a pretty extreme progressive when it comes to national politics, but when you boil that down to local politics, it ends up looking a lot like libertarianism. Local politicians are almost uniformly petty tyrants posing as glorious heroes under the banner of “local control”.