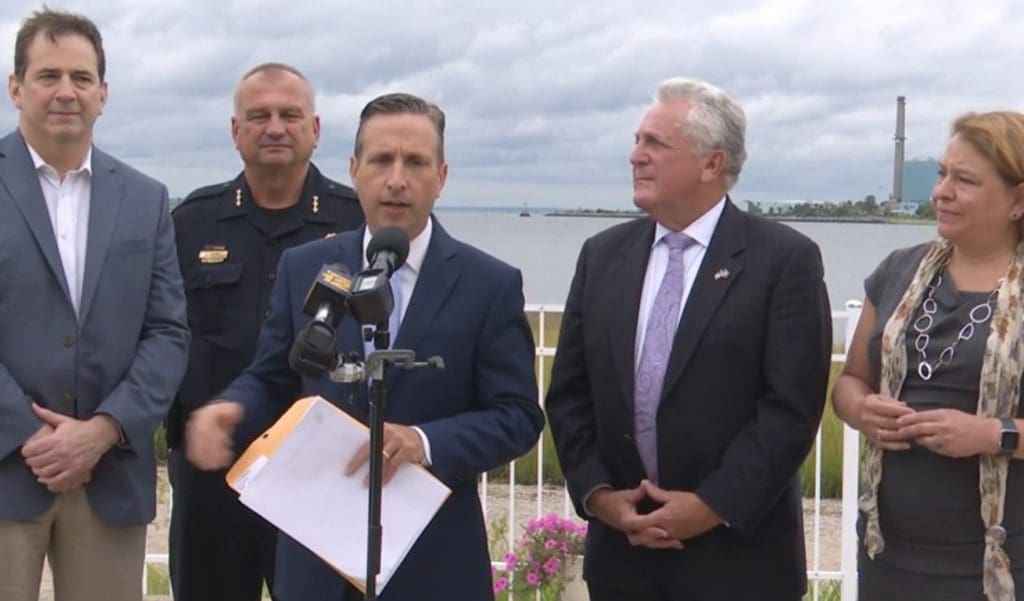 NORWALK, Conn. – Waterfowl hunting has not been allowed at Calf Pasture Beach since May, Norwalk officials said Friday.

Duff attempted to get legislation passed this year to ban hunting at Calf Pasture Beach. DEEP Commissioner Katie Dykes understands that the need for safety at the beach and instituted the temporary ban, Duff said Friday.

A letter from Kulhawik to Dykes helped get the ban. “I … believe it to be a safety issue to allow hunting in such close proximity to beach goers and children,” he wrote.

A DEEP spokeperson did not return a call from NancyOnNorwalk.

Hunting season for Canada Geese was set to begin Sept. 14 at Calf Pasture and all other designated hunting areas sound of I-95. The hunting seasons for other migratory birds are staggered throughout the fall.

Duff said he needs to find out from the DEEP commissioner what the consequences are for violating the moratorium. Kulhawik said he assumed if a Norwalk police officer encountered a hunter violating the ban, a DEEP officer would be called. He said the department has not firmed up its policy on this because duck hunting does not begin until next week.

Not to sound ignorant, but would it be ok for an illegal immigrant to continue shooting birds considering the sanctuary policies we have in place? Any chance to get clarification on this?

Another sad day for Norwalkers (and hunters). Hunting in that area has been around for years! Now because people get “scared” it can’t happen? What is this country coming to?

Afraid of hunters shooting geese and ducks? Where people have hunted for hundreds, if not a thousand years? I’m more afraid of walking barefoot anywhere these geese dwell than the hunters that go after them. Without the hunters, there will only be more of them polluting the water, sand, and grass in and around the park. And the politicians are worried about plastic straws and plastic bags???

Why allow any hunting in our City. It’s cruelty to animals. And a terrible example to our kids.

Yes. It’s much more humane to keep them in cages from birth where they can’t move and pump them full of steroids and antibiotics until they are plump enough to slit their throats than it is to let them live in the wild until they are hunted and harvested for their meat. Now they can overpopulate in the wild, ruin ponds and lakes, leave their droppings all over the beaches and parks.

Not for nothing, but there are boaters at risk of stray shooting. One of our rowing shells was once hit with richochet (or is it called scattershot?) as they made their way along the Harbor a few years ago.
Seems like the wise thing to do, given the density of population in this area.

Is it really true hunters seek birds to eat ? And if not shot out of the sky the ducks and geese would pollute our ponds. Anyone shooting deer and turkey these days ? Wildlife like long term homeowners seem to have gotten the message and exited our fair City.

A ban on shooting in a family recreational park makes sense.

Ridiculous . What an opportunity for politicians to get some news attention . Anyone due a survey of the area residents to see if they even care ?

If it has been going on for decades then the residents that they feel might be overly alarmed have known off duck season for as long as they have lived in the area.

Use of the words “might be” in bans can be an entirely different subject of concern.

We should get Ducks Unlimited to weight in on this .

Why not focus on issues that matter .. overdevelopment/ PoKo/our ten year master plan/ the so Norwalk bridge .

Actually, there are quite a few residents in areas adjacent to Vets Park that have expressed concern for this practice, as have rowers and other boaters. There has been outreach to our councilmembers and our legislators for at least ten years on the subject, though only the state had the ability to authorize this change.

How many people have been injured by hunters over the years?

How many motorists have perished on the roadways these guys can’t get fixed in a timely fashion? It’s almost 2020 and we still do not even have cameras on the Merritt which is a free for all for commercial vehicles and trailers lately.

Sorry, this is just another shameless photo op for fixing a problem that didn’t exist. And a nice coverup for these leaders who have authorized the pilfering of our transportation fund to the tune of $billions now.

I am third generation Norwalk and hunting at the beach has always been allowed. Are there any statistics to show this is a problem or this just another political publicity stunt. As a Norwalk resident it is already frustrating enough that the beach is to crowded with non residents. Now another way for resident not to use there beach

The state of CT has become a anti hunting state. I’ve lived here all of my life 50plus years and have seen so many legal hunting areas closed due to non hunting liberals. This state has a long tradition of waterfowl hunting that has been occurring since the 1600’s. Now that the Leftist Liberals have been in office in our state we have lost a tradition and areas we’ve grown up hunting taken away from us. We eat the birds we harvest, we follow the laws and yet we keep getting screwed every year.I grew up a Democrat and was proud to be one. but what’s been taking place the last few years I’ve changed my views. I hate to drag politics into this discussion but its obvious that its had a influence on these areas being closed.

Side by side or under over 12ga shells do not create much of a “might be” stir or concern. but I do not hear this group go after a temporary ban on the F-15s that came through for a fly over at the US Open.

I would not have supported such a ban of that either.

As quoted in the Norwalk hour today:

” Some Fairfield County residents were rattled Sunday afternoon by the sight – and sounds – of four jets.

While some local police departments gave a heads up on social media, many people were unaware that the military jets would be flying overhead.

For about about 30 minutes the F-15 Strike Eagle fighter jets practiced for a planned flyover of Arthur Ashe Stadium for the U.S. Open finals in Queens.”

The jets were scary – then fun, once we knew what they were. I would have appreciated a phone message from the mayor, etc. since it was the loudest plane I’ve ever heard. C’est la vie.

Perhaps the hunters could use knives instead? I’m always hearing about how “knives kill people too” after mass shootings so that would lead me to believe that knives are just as effective as guns…..