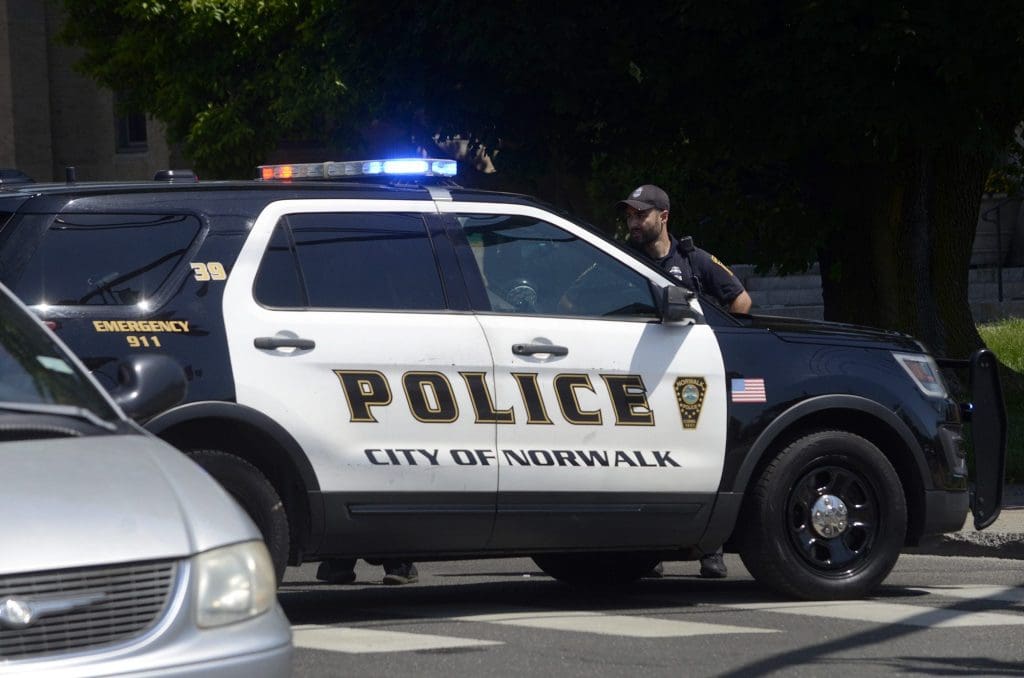 York Mario, 61, of Orange, was arrested June 16, according to the news release, which was sent Friday. Mario with charged with Risk of Injury, a felony, and Reckless Endangerment second degree, a misdemeanor. He turned himself in on a warrant and was released on $5,000 bond.

NPD began investigating Nov. 11 when a West Rocks student reported being mistreated, the news release said. Detective Kristina La Pak of the Special Victims Unit (SVU) worked with the Department of Children and Families (DCF), and learned that on Oct. 29, Mario grabbed a student’s shoulder while the child was sitting in a chair and pulled him, causing him to fall to the floor, according to NPD. Mario dragged the youth across the room while he clung to another desk.

Another student caught part of the incident on video, police said. Police consulted with Stamford Superior Court and obtained an arrest warrant for Mario. The news release didn’t say why it was issued Friday when the arrest happened in June.

I’m sure the “child” is an upstanding student from a great family and home environment.

Herein is the problem ..teachers are no longer allowed to discipline a student so some just get so damn frustrated they take a more extreme form of trying to get control.

Parents just dump their problems on the school system thinking thier child will magically be transformed into an obedient and respective student and family member.

If teachers had the ability to administer punishments without fear, possibility some students can be turned around

Those students who are habitual offenders do not deserve to be in a school and should be removed for the betterment of the class and society.

Stop coddling these kids, get some level of discipline (not always physical type) but by other forms.

Stop with the drugs. Some are taking heavy mind shifting types including Thorazine. You can’t medicate a child, drop them off and expect teachers to do the heavy lifting.

Society has changed, so new or not so new methods need to be discussed.

This happened all the time when I was a youth

Good for him. I am sure the kid deserved it. He should have dragged the Superindentent across the room to work some sense into her. I was looking at a picture of BMHS graduation today. A graduate’s hat reads,”I missed 122 days of school and still got my diploma!” Now thats a good school system.

We hear what the teacher did, but let’s here what the students behavior record is like. Maybe the kid was out of control, and didn’t comply with what the teacher asked. Today the teachers in Norwalk have been told discipline is a bad and shameful word. The Superintendent and top people in Central Office want all teachers to do nothing to unruly students, to just be kind, and ignore disrespectful behaviors. Teachers will be reported to DCF immediately if they say or do anything to unruly students. Teachers in Norwalk are treated terribly today, and it’s no wonder so many are leaving. This is why some teachers like this one lose it and get frustrated too. Why should this teacher be arrested when he didn’t throw a blow, and other teachers in the past have done worse things. it’s strange isn’t it? Maybe the teacher was out of line, but it sounds like another veteran teacher being forced out of his job.

No way should a teacher put their hands on a student School security, etc… is supposed to handle an out of control kid. If that was the case!

A border agent riding a horse appeared to “whip” an illegal immigrate and turned out to be the angle of a few pictures that clearly showed they did not.

If you read both sides of the story it comes down to who do you believe and what does any evidence prove.

The above story tells only one side. Reading the local paper at least explains a little more detail as to what might had happened.

Sounds like another case of the press creating a public hanging only to find the teacher did nothing wrong and the press never apologizing after the fact.

Based on what I know about this teacher, the kid asked for it! I’m sure his fellow students think so too.

Here’s an interesting take from those on the ground:
1) Would this story be viewed differently if the student has a history of violence and aggression towards teachers? Just a thought
2) Do parents realize that teachers can NOT protect a child under ANY circumstances? If a Child is being bullied or beaten up a teacher can NOT put a hand on the aggressor..Let the bullied child get beat up and probably be scarred for life..BUT the aggressor just goes on his or her merry way. Yes, the inmates are running the asylum..
3) Teachers feel if the act to protect a child, the parent of the aggressor will sue them and probably worse.
4) Teachers are instructed not to intervene in a fight. They are to go to the nearest classroom and call the office. OF course the office could be busy and not respond right away. Meanwhile a victim is getting pummeled. Is this any way to run an airline?
5) At the end of the day the aggressor is given “restorative” discipline. Basically the system apologizing to the student for his or her bad behavior. NO consequences.

Our child attends West Rocks and some of the stories we hear about students’ behavior are astounding. God help those teachers.

Reading the Hour article was helpful and the teacher may well have been trying
To avoid a more serious injury, but many of the comments don’t refer to that but simply excuse the teacher since the kid may have been “bad”. The same people who are universally justifying this type of behavior probably laughed and gave a thumbs up when Trump suggested that police officers should purposely bang a denfendants car against the roof of the police car when they put him in the back seat.

@andrew. You couldn’t be more correct! The teachers are helpless! They have ZERO support! They can’t even hold a HS student responsible for work it completed! As another poster posts about their are fights constantly not just at the High Schools but the Middle Schools as well! Even now starting at the Elementary. I know from a teacher a 4th Graded picked up another student and body slammed them to the asphalt! You know what happened to that student?! Absolutely NOTHING. They were back in class the next day! But should a student be harming themselves or others what are the teachers security suppose to be @NIZ?! Please let them know.
This whole story sounds way way to fishy and everything we’ve read and heard about this teacher has been that they have been outstanding and a great teacher. It also sounds like the Prosecutor was the one who forces the arrest and the Detective didn’t have a choice. There is no case here and when the charges are dismissed the teacher will sue and collect $$$$$$. But what does it say to the rest of the teachers. If you see a kid getting the crab beat out of them OH WELL! Don’t you dare touch the students. I sure hope it doesn’t come to this but we are on that express track. We now care more about Social Justice BS and WOKE Garbage in our schools then supporting our teachers and having a safe environment for the kids to actually be taught and learn something. But thank gos we gave the superintendent another extension and raise. I swear NO ONE better cry about funding for our schools agin with her salary in the stratosphere! And if we don’t start supporting our teachers these kind of incidents will increase and then assaults on staff will start to happen. This will be East Side High before Joe Clark if we don’t stop these problems now!

Those people who think the teacher had no business putting their hands on this student should spend a week-two weeks teaching in a classroom. These people have no idea about the lack of support the teachers are getting today. The directive of no discipline, or no consequences for bad behavior is true today and is coming from the Superintendent and her administrators. It is horrible and inconceivable what the students are being allowed to do today to the teachers. Teachers are being hit, spit on, cursed at, disrespected, and yet if teachers respond then they are dealt with as criminals themselves. The Norwalk Public School system is going backwards. This is why the Board of Education and Central Office administration need to be overhauled immediately. Get these people out who don’t support the teachers before things get even worse. From what I’ve been told this teacher that was arrested was loved by many of the teachers and students in the school-he has been known as a very good teacher. Again the media and the school administrators only present one side of the story. The teachers are seen as the bad people now, and this is why so many people want out of Norwalk Public Schools. It is no wonder why so many advertisements for teacher vacancies in Norwalk are going up all over the state of CT and New York. Nobody wants to work in Norwalk anymore. It’s high time for new people on the Board of Education and in Central Office.