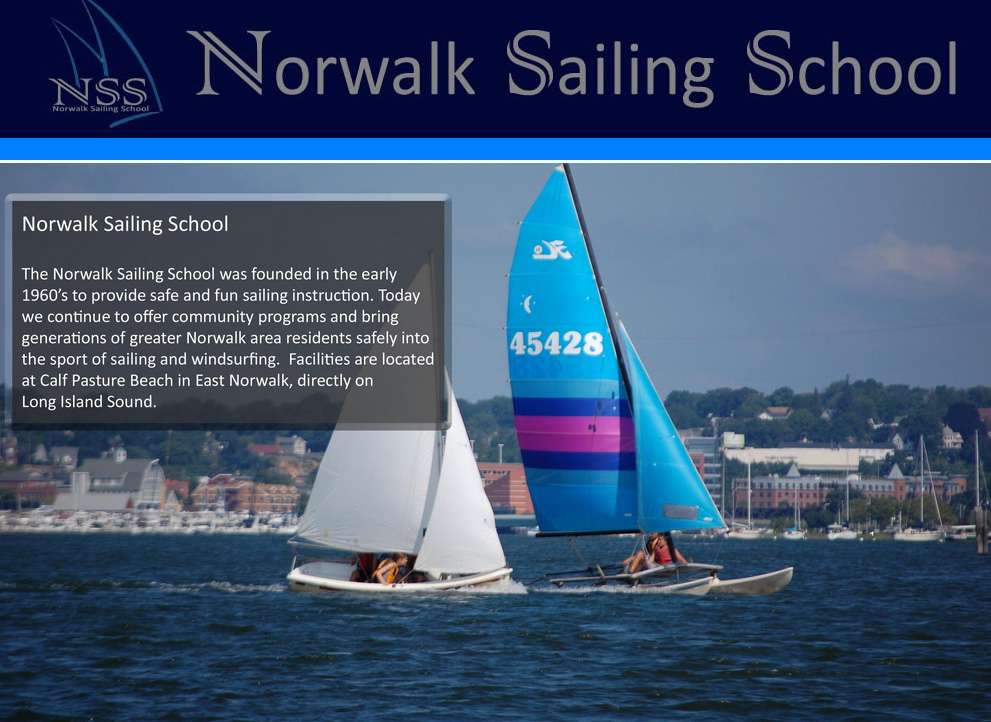 NORWALK, Conn. — Many people question what will happen at the Calf Pasture Beach Norwalk Sailing School site, now that Bruce Caslowitz isn’t putting in a bid to continue the service he’s offered there for 36 years.

The City has issued a request for proposals rather than renew the $1 a year lease to Caslowitz’ nonprofit for another 5-year term, calling for qualified vendors to “provide a sailing instruction program and a seasonal non-motorized watercraft program, at Calf Pasture Beach, during regular park hours.” Among its requirements is a 20% fee based on the previous month’s gross revenue or “a standard monthly rate” to be paid to the City for use of the property.

Caslowitz said that wouldn’t be financially possible for a small nonprofit like the Sailing School. The nonprofit files 990-N postcard forms with the federal government each year, which means it’s  had “gross receipts not greater than $50,000.” So he’s out.

“I don’t know how anybody could even bid on it to afford it so I suspect in my mind that nobody’s going to bid on it and the city will lose a great program down at the beach,” he said.

Josh Morgan, Communications Manager for Norwalk, said in July when Caslowitz was notified that the property would be going out to bid that City decided to issue a request for proposals for the property, located at Calf Pasture Beach, to allow “staff and elected officials to review submissions” and to make sure all City agreements are standardized.

“It is important that contracts go through the public process and do not get extended in perpetuity,” Morgan said in an email. “It is also important for the City to have standardized agreements at its facilities and public spaces. The proper agreement for this type of use would be a license agreement – not a lease agreement – which will protect the business, City, and taxpayers and will allow for equitable use of the space.”

The City is working toward buying the Sailing School’s building for $25,000. “We believe that by including the amenity as part of available city infrastructure it will only enhance potential bid offers attract a large pool of qualified respondents who will continue to provide top quality and safe programming for people of all ages and abilities,” Director of Recreation and Parks Nick Roberts wrote.

Caslowitz said that costs and the limited season, from about Memorial Day to Labor Day, are some of the reasons why it’s hard to make money.

“The money’s not there with such a short season and such high expenses and such high insurance costs,” he said. “I’ll give it to you the way it is: staff – salaries, payroll, hourly payroll; insurance; boat maintenance; registrations; mooring permits; mooring inspections where the $1,000 last year – it just goes on and on. You know maintaining 30 sailboats, maintaining 30 canoes, kayaks all the parts you need are stainless steel everything every shackle you buy is $4, $5, $6 – I mean it’s just an amazing amount of money a gasoline for the chase boats at the gas dock filling up two boats every week you know it’s huge.”

The season, which Caslowitz admits could be extended slightly into September, although then his workers who are college students are no longer able to work, limits how much revenue could be brought in. “And you have eight weeks to make all that money,” he said. “You’ve got to keep the insurance year-round for the lease with the city, with no lapses. And insurance it’s about you know $7,000, $8,000 a year. When I started this it was $380 a year for insurance and that included workman’s compensation. Now it’s $7,000, $8,000 and it doesn’t include workman’s comp.”

Mocciae said that he brought Caslowitz into the Sailing School after the previous director left. The school itself has had just three leaders, Caslowitz said, including himself.

“I brought Bruce in because he cared about harbor safety,” Mocciae said. “So we did a harbor safety program. Now they’re more concerned about the money that it makes for the city than the safety of the people that are in the harbor.”

The $1 a year lease reflected the community service aspect, he said.

City officials did not respond to a request on Thursday for information about if any bids had been submitted yet. The bid closes Tuesday, just two weeks after it was posted.

Caslowitz said he did not receive a salary for his role with the Sailing School, although some expenses, such as gasoline were covered. If he directly taught a lesson, he could be paid as instructor for that.

“I’ve been doing winters down here (in Florida) and I had businesses in San Diego when I was gone all winter,” he said. “This was just a summer thing. It was part of my lifestyle, I was able to do it with the businesses I was in. And, you know, it was never a source of income for me. I never even took a salary — unless I personally teach a lesson — that’s part of the bylaws of this sailing school.”

Sometimes covering the costs of repairs and replacements cost him money.

“It’s cost me money in years obviously when I had to buy boats and stuff,” he said. “We had a big Halloween storm in 1992 maybe – it was a huge flood. We lost our deck, we had to rebuild. We lost four boats, you know there was no money at the end of the year to buy new boats but I had to do it. It’s just one of those kinds of things you know.”

Caslowitz said he knows at least one community group that is looking to bid for the property and consulting him for advice. He said that there are a few ways he sees that a new owner could make the site more profitable, such as extended hours or raising the rates.

“There’s probably a formula to build it to a crazy business,” he said. “If they want to rent canoes, every kind of paddleboard, get 20 more kayaks over there, and 10 more paddle boards, and have more staff and run longer hours, maybe 9 to 6 every day instead of I do 9 to 5 on weekdays, 10 to 6 on weekends, expand the hours.  You’re gonna have to raise the rates too – I never even touched on that – I mean, you expand hours, expand the dates a little bit past Labor Day, a little bit before Memorial Day, you know, weekends in May if it’s nice people want to get on the water.”

Caslowitz said he tried to take into consideration his staff, many of whom were in college, in planning the hours, which is why he had a slightly later start on weekends. If there was a particularly busy day, Caslowitz said that he would give them all a few extra dollars in tips.

He said he was particularly frustrated this whole time with the lack of communication from City Hall. He said that he invited Roberts to visit, but he never did.

Roberts announced this week that he would be leaving later in April.

“Small community sailing programs, that offer access to the water, are critical in coastal areas because public access to the water is so limited and the cost of private clubs and their programs is prohibitive to most. In a time of significant discussion of environmental justice, the climate crisis and poor water quality in Long Island Sound, an effort RIGHT NOW to put this service out to bid is NONSENSICAL AND SHORTSIGHTED,” Kathleen Finnegan wrote in a comment to NancyonNorwalk.

Heidi Mangels wrote in a comment that she was grateful for all the Sailing School has done for Norwalk.

“I’m saddened to read Mr. Caslowitz won’t be running the Norwalk Sailing School this season. I have rented both kayaks and SUPs from the NSS at very fair hourly rates” she wrote. “I can only imagine what a for-profit vendor will charge, making renting the equipment cost prohibitive for many. The staff at NSS was always very friendly and helpful, providing excellent instruction on equipment use. I hope whoever wins the bid employs staff from previous seasons – and maintains the current pricing structure. Mr. Caslowitz, thank you for all you’ve done with NSS and for our city. You have been an institution for the past 36 seasons, and I truly appreciate all that you did.”

I wonder if Mr. Caslowitz would consider filing an application at a fixed fee of $1 per month? It seems there might not be any other bidders.

Once again, with the sky falling, our city opts to fix something that apparently ain’t broken.
I am not a sailor nor is anyone in my family but I think it’s terrific that we have this amenity for those who make use of it. Just like MY golf course, our beaches and parks, disc golf course, basketball courts, ball fields, playgrounds. Nobody uses all of these but we should support them all for the best interests of our neighbors and as valuable resources for Norwalk.
Let’s fix some things that are broken.

It is a complete shame the way Bruce has been treated. 36 years as a non profit and they tell you to pay now. Nick Robert’s sure botched this one. Trust me. Care to ever comment Mr. Mayor?

Spend $ millions fixing the NHS pool thats about to be bulldozed, then hold the line on a few $1000 in subsidies to promote water safety for youth. Genius.

Yes Bryan! According to the mayor Nick Roberts wwas brought in to clean up Parks and Rec. Off to a good start huh? Oh thats right, HE QUIT already. Trust me that this story is not over.

Ridiculous. I know a ton of people who never would have had access to the water if it wasn’t for that sailing school. I also know a number of people whose first job was at that school. The positive aspect they created as far as both sound safety, and introducing kids whose families never could have afforded traditional sailing classes to the water was invaluable.

What a shame. While not a Norwalk resident, I frequented the school a number of times over the years and it was the best public sailing venture in the area that could be found. It was clear Bruce cared about teaching people both a love of the water as well as waterway safety. it’s programs like these that provide a strong sense of community and great outlets for kids and families who cant afford a yacht club membership or their own boats. Sad waste of govt involvement.