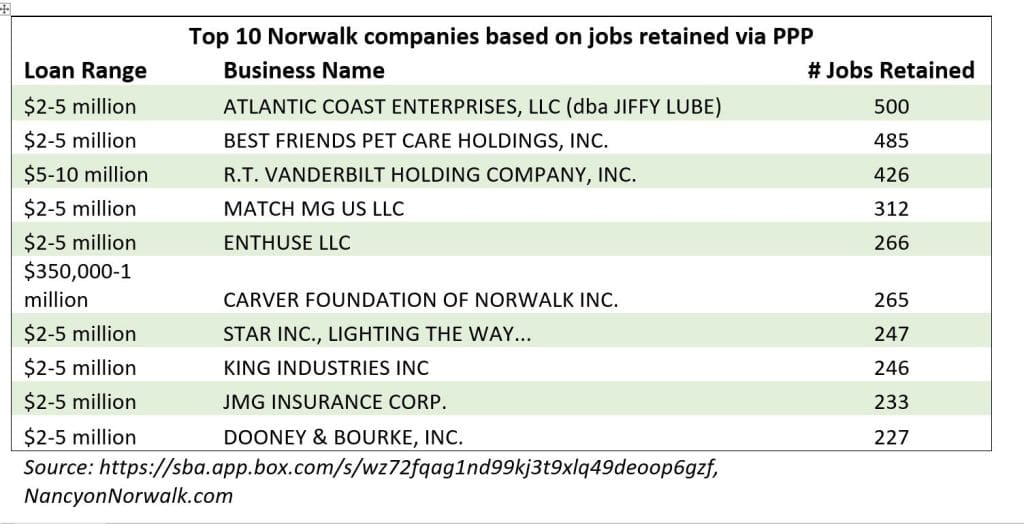 NORWALK, Conn. — Norwalk-based businesses that received loans under the Paycheck Protection Program (PPP) have retained close to 20,000 jobs, according to recent data from the Small Business Administration.

As part of the application process, companies were asked to identify the number of “jobs retained,” during the period of the loan.

NancyOnNorwalk took a look to see which jobs were protected, at which companies, in which industries.

Among larger Norwalk businesses – those receiving loans greater than $150,000 – 11,790 jobs were retained. There were 293 companies in this tier, and the top 10 of them accounted for 27 percent of jobs retained by this group.

Not all the jobs being protected are located in Norwalk. Several of the larger companies are headquartered in Norwalk but are reporting numbers for employees across the country. Best Friends Pet Care Holdings, for example, has locations in 16 states but its home office is in Norwalk.

Which industries fared better than others in the large-loan group?

While the winning industry categories were driven by just a few large companies in the mix, doctors and nursing care facilities, full-service restaurants and educational support services were among the top 10 industry categories in terms of jobs protected by PPP funding.

(Government data reports loans over $150,000,000 in broad ranges and identifies the company; for loans under $150,000,000 the data includes exact loan amounts but doesn’t identify the specific business.)

Is the money only for protecting jobs?

PPP loans are available to both for-profit and non-profit organizations, and provides funding for certain expenses beyond payroll protection.

Funds may also be used for rent or mortgage payments and utilities. If companies follow the program’s guidelines, many – if not most – loans will be forgiven.  According the SBA website, here are the requirements for loan forgiveness:

Forgiveness is based on the employer maintaining or quickly rehiring employees and maintaining salary levels. Forgiveness will be reduced if full-time headcount declines, or if salaries and wages decrease. The loan forgiveness form and instructions include several measures to reduce compliance burdens and simplify the process for borrowers, including:

Complete data sheets for the PPP program, by state, is available for download here.

Information on the overall program can be found here.

The “jobs retained” number is as bogus as the numbers the CT DECD used in the great Malloy give-away.
Go through the PPP “entitlement payments” and check the hedge funds,religious institutions,real estate brokers…you name it. All the takers jumped on the opportunity to enrich themselves and it was a complete FAIL. So much so,that our government wants to do it again.
Trash haulers. Pool companies. Really? Their business was not affected by anything but perhaps poor management and for the most part they were busier than ever due to COVID. I looked at farmers I know,out West, and they were neck deep in PPP. Usually they rake in Federal subsidies but this is just a windfall. And the best part…generally they complain the loudest about welfare!
No wait! The best part?!! Banks geta huge “fee” of up to 5% for pushing paper. The fees were a no-brainer for them and that accounts for their aggressive phone calls.
An absolute FAIL by congress and Trump, and the bailout will go down as one of the greatest financial frauds in out history.

25 Lobbyists and law firm, who approved this this. Ovarian cancer, talc, and a company that dumpe carcinogens into Oyster shell park. Planned Parenthood? we should have a say in forgivable loans granted through Congressman Jim Himes’ website. What was the approval process? King industries is a chemical plant with a permit to run exhaust into the sewage lines above the Oyster beds? We have asked candela for the list of products they sell. How can a chemical company sell hazardous waste in a residential community without an evacuation plan? Three thousand people can’t be evacuated from that plant in 3 minutes. What is the kill zone? hydrofluoric acid evaporates at 79 degrees and travels 19 miles and hour. They had 2 unreported accidents already and no one from the City is allowed in without an appointment. They now plan to develop Lowman’s Plaza. How can they evacuate if they have a spill? How many people live within the kill zone and why doesn’t anyone care to know? Loans through Himes need oversight not form Himes. Himes took money from Oxy, sits next to Schiff, and is responsible for the NSA nightmare, FISA abuse, and the list goes on and on. Its bribery. Himes never referred the financial crisis for criminal prosecution and his largest donor is Bank America. Its criminal.