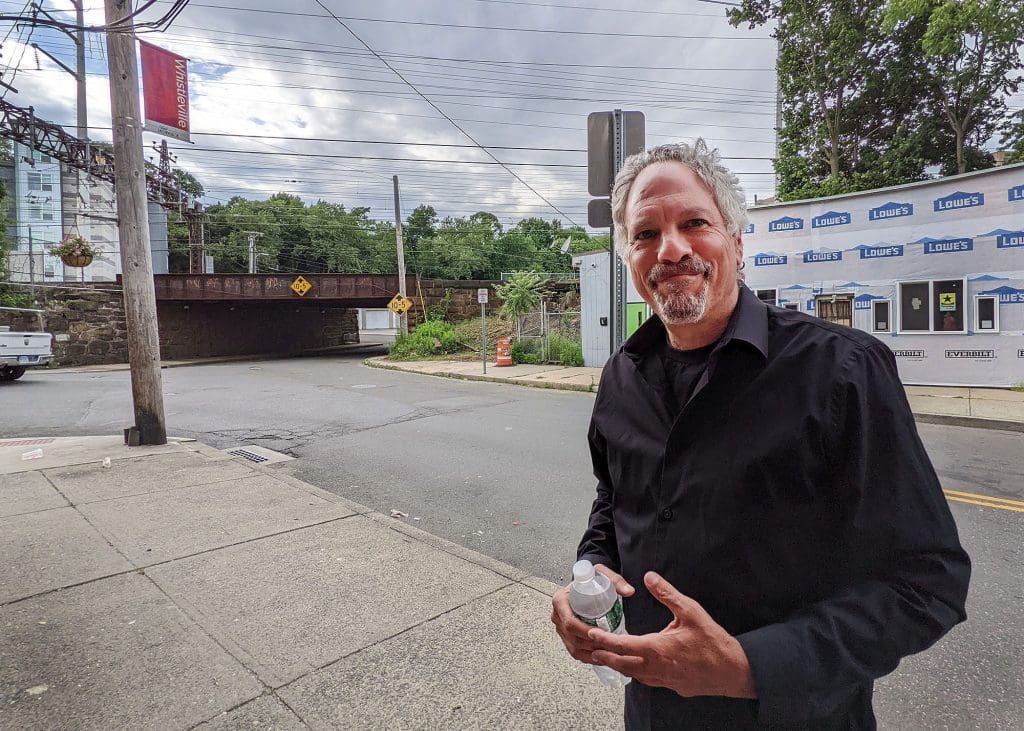 Steven Christofor at the intersection of Mulvoy Street, Franklin Street and Ely Avenue. Note the Whistleville banner and the hanging plant, at left. 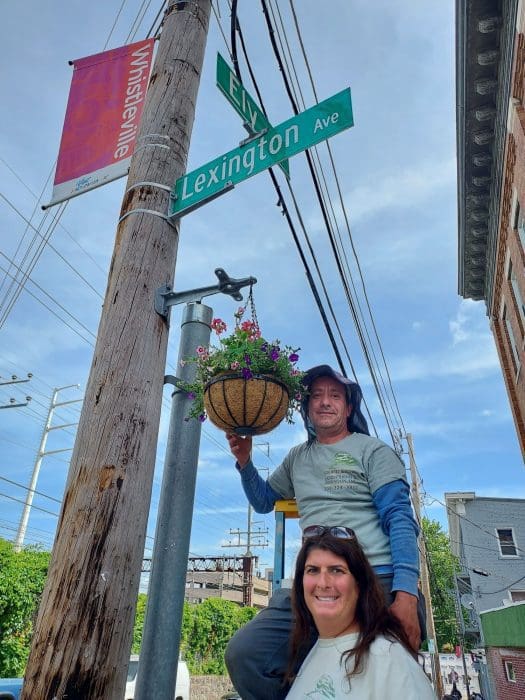 Steven Christofor has brought the skills he honed in his own Golden Hill neighborhood association to Ely Avenue. In 2018, he began by knocking on doors, trying to attract folks to meetings about improving the area, but “not a lot of people came,” he said.  So, “I figured, OK, let’s show them.”

Christofor formed the Whistleville Neighborhood Association and years later, is still “acting president.” Bart Stanko is “acting vice president.” They’ll never take the offices permanently, because the goal is to hand the association off to neighborhood stakeholders, he said.

Early on, then-Director of Community Development Planning Tami Strauss helped bring new sidewalks to Ely Avenue, he said, calling the improvement “really huge” because the sidewalks “had really gotten to a bad state.”

“We had done neighborhood cleanups, we did Mayor’s walks, we brought all the different stakeholders to the area and slowly got everybody together. And then we had COVID in the middle, so that kind of affected it,” Christofor said. “Then, long story short, today, we have a neighborhood association that we formed.” 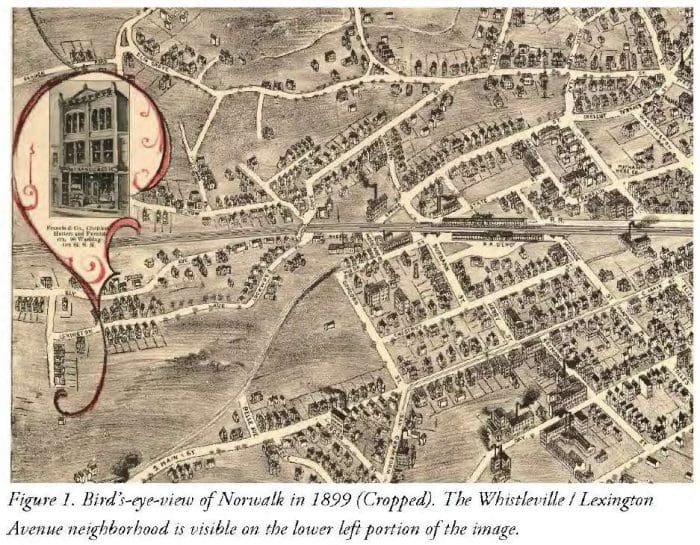 An illustration from a 2015 study done by The Cecil Group for the Norwalk Redevelopment Agency. An area of South Norwalk was nicknamed “Whistleville” because of the trains blowing their whistles as they came through.

Whistleville, a part of South Norwalk nicknamed for its proximity to the train station, was officially added to the National Register of Historic Places about a year ago. It’s an area roughly bounded by Ely Avenue on the north, South Main Street to the east, Tito Court on the south, and Martin Luther King Jr., Drive.

Jim and Joe DeFlorio say they’ve been on Ely Avenue for 40 years and their family has been in the neighborhood since 1930. It was “really rough” in the ’70s and ’80s, with gangs and drugs but it’s cleaned up now. Joe DeFlorio said the 40 new apartments at 1 Bates Court helped.

“My old man would just say ‘it’s development that cleans the place up.’ Bottom line, it’s true,” he said.

The Whistleville Neighborhood Association raised money and hung flower baskets last month, next to banners that were posted recently.

They look good and make people feel better about the street, said Jim DeFlorio, a Whistleville Neighborhood Association Board member and proprietor of DeFlorio’s Variety. 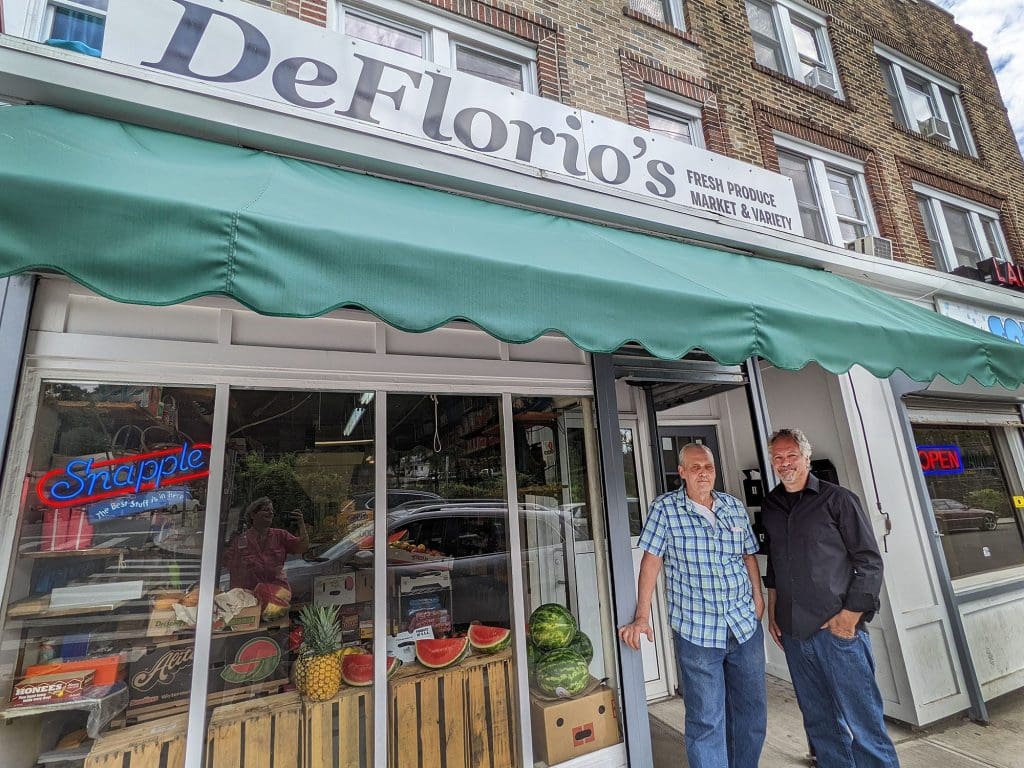 Christofor said he got involved with the Golden Hill Association in 2005, shortly after opening Christofor Realty on North Main Street in South Norwalk, and learned as Jim Clark and Jim DelGreco led a Cedar Street improvement project, a successful effort that hinged on first  getting the stakeholders to agree on a plan so they could qualify for a federal grant.  Over the following eight years, Christofor helped coordinate with the Connecticut Department of Transportation on work that included “street drainage and infrastructure, street redesign, new sidewalks, historic lighting, new tree plantings, expanded green space and 15 new parking spaces.”

“We also rezoned the entire street from Neighborhood Business to Village District to allow for future development,” Christofor said. “It was during this time that I learned the different aspects of neighborhood redevelopment. I also served on the South Norwalk Planning Committee.”

He traveled to Manhattan often, and as he stood on the South Norwalk platform waiting for the train, he’d look at Ely Avenue. 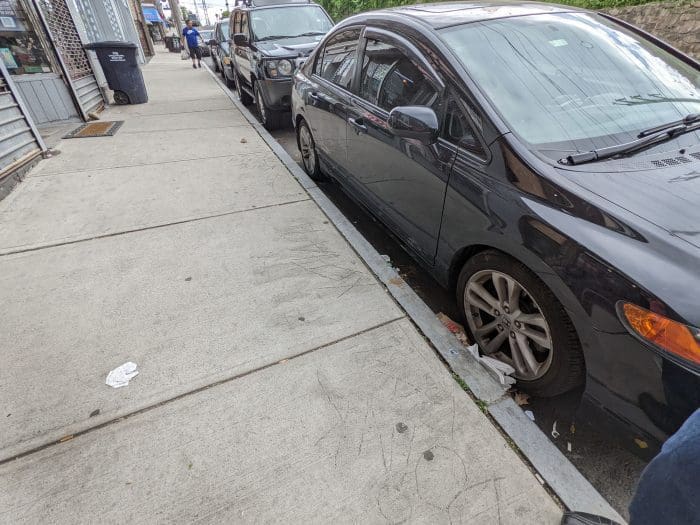 The Whistleville Neighborhood Association has raised money to fund hanging baskets and pay someone to water them. “My dream” is to eventually “have someone sweeping the street twice a week,” Acting President Steven Christofor said.

“I said, ‘OK, I have to I have to get to this neighborhood.’ Because I loved it. It’s very Brooklyn-esque, you know, and it’s old school, and I’m a Little House on the Prairie kind of guy. So it just brought me back to my roots,” Christofor said.

“Finally, about four years ago, on my own, I came here. I just started meeting everybody, introducing myself, and, you know, seeing if I could get some interest in the neighborhood coming together.”

He worked with the Norwalk Redevelopment Agency and in 2019, new sidewalks “became a symbol of change and the foundation for further improvements.”

“The Department of Public Works (DPW) milled and re-paved the portion of Ely Avenue that intersects with Lexington Avenue in August 2020. In 2019 prior to the Ely Avenue re-paving, new granite curbing, concrete sidewalks, driveway aprons and ADA accessible ramps were installed under DPW contract RD 2018-1 ‘Concrete Curb and Sidewalks at Various Locations’.  The total value of the RD 2018-1 contract was $763,574.  DPW does not have construction costs specifically delineated for these Ely Avenue site improvements.” 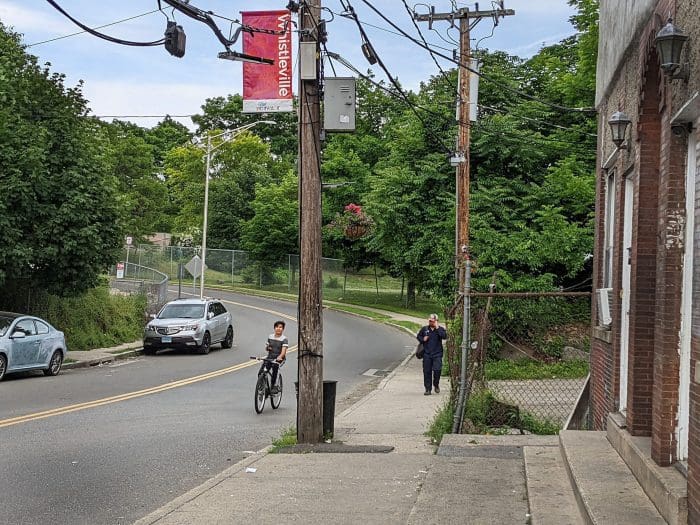 After the pandemic delayed progress, Norwalk Chief of Economic and Community Development Jessica Vonashek began helping and banners went up on Mulvoy/Ely utility poles, along with brackets for hanging baskets, Christofor said.

The neighborhood association paid for the baskets this year, hiring local resident Carlos Dorme to water the flower baskets twice a week. It also hung winter baskets in December.

“In the future, we intend to create a budget for the sidewalk of Mulvoy and Ely to be swept twice a week as well. We are currently exploring street art possibilities and bridge underpass improvements at Mulvoy Street,” Christofor said.

He called Norwalk Neighborhood Coordinator David Shockley “one of my favorite people to work with” and said Shockley been “really instrumental” and is currently working on several initiatives that will complement the neighborhood association’s work. 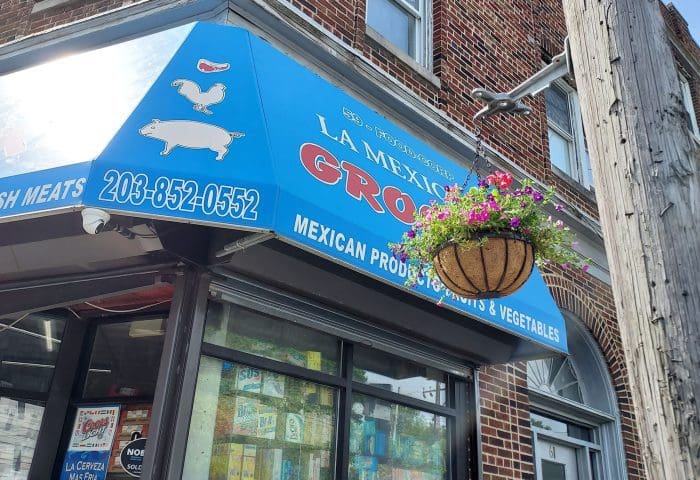 “I manage the Traffic Graphic Program for the city and suggested that artwork, with a Whistleville theme, be applied to the black traffic cabinet located at MLK Dr. & Lowe Street. Cara suggested exploring the use of decorative tile for artwork, possibly on the side of a building to add creativity to the neighborhood,” Shockley said in an email. “I have a budget for the Traffic Graphic Program, and I am hopeful of budgeting in for some artwork.”

Artwork would need approval from the Norwalk Arts Commission and the idea is in its formative stage, Shockley said.

Portland, OR, has artwork painted on its streets and Steven Christofor said he’s going to work with the City’s redevelopment agency to get information, because that might work at the top of the hill.

“We’re also working on some improvement of the bridge as well, lighting wise,” he said. “It’s a little complicated because it’s the State. And it’s the railroad. So it’s tough to coordinate everybody just to improve it. But those are on the plans. Like I said, we have a good neighborhood association.”

“The goal is to hand over the neighborhood association to the residents of the community. In the meantime, the above members have joined together to provide a structure and bring tangible improvements to the neighborhood that will inspire and motivate the community to have a voice and participate in the improvement of their community. The support of the Mayor Rilling and City Hall has been a big help to this end.

“We intend to share our work with other communities across America and show how a combination of raising private funds while working with the local government can bring about positive change in a timely manner.” 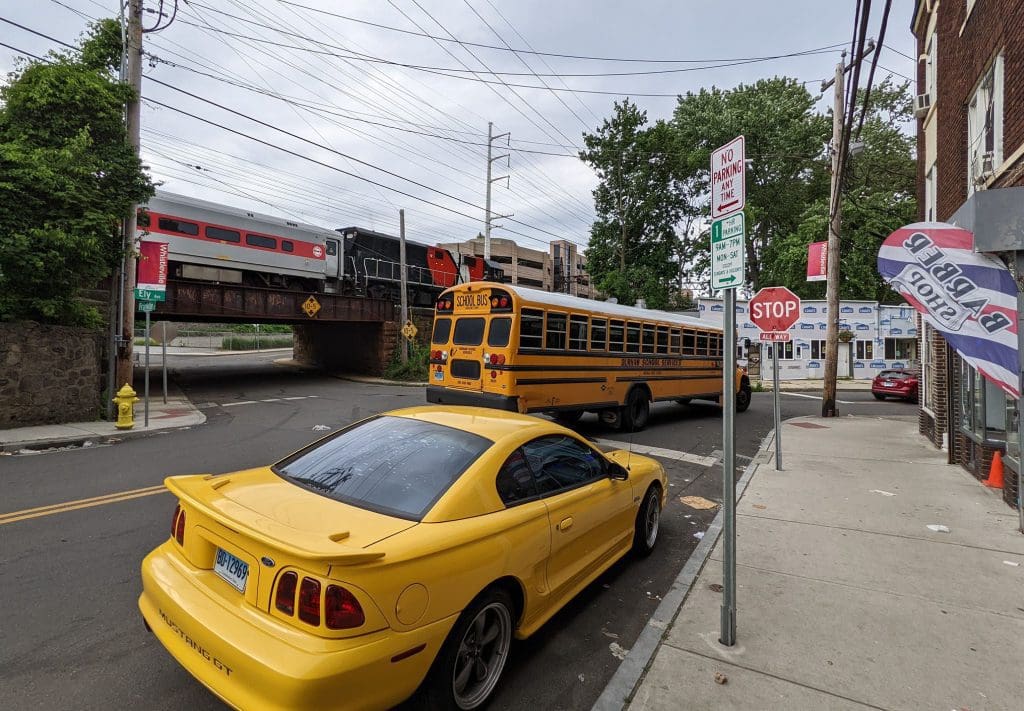 A view from Ely Avenue of the railroad bridge over Franklin Street. Back in the 1970s and 1980s, it was covered with graffiti and, “I can’t believe that bridge is that clean,” Joe DeFlorio said June 7. The Whistleville Neighborhood Association hopes to spruce it up with lighting, Steven Christofor said.