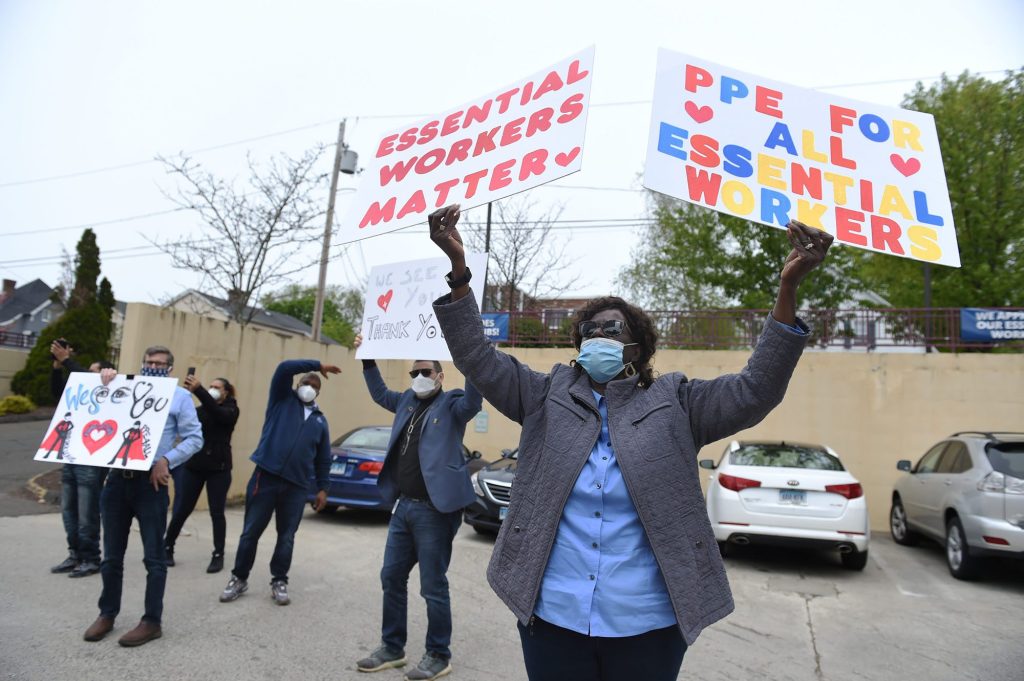 Rep. Pat Billie Miller, (right) D-145, holds signs supporting health care workers at Golden Hill Rehab Pavilion in Milford with a group of Democratic State Senators and State Representatives Friday. They were one of three groups of elected officials traveling across the state visiting fifteen nursing homes to highlight the fact that black and brown people are disproportionately impacted by COVID-19 as workers exposed to the virus and the need for more personal protective equipment. The caravans concluded their tour at Kimberly Hall North in Windsor later in the day. (Cloe Poisson, CTMirror.org)

Widespread testing at nursing homes across Connecticut has begun, part of a push by Gov. Ned Lamont’s administration to curb the spread of COVID-19 among one of the state’s most vulnerable populations.

But operators at some of the homes said Tuesday that while all residents are being tested, staff members are not. That has raised concerns about whether the effort can truly halt the spread of the fast-moving virus, which had claimed the lives of 1,627 nursing home residents as of last Wednesday, the most recent data available. The deaths represent more than half of all coronavirus-related fatalities in the state.

Timothy Brown, a spokesman for Athena Health Care Systems, which owns 54 nursing homes, assisted living centers and home health care agencies across Connecticut, Rhode Island and Massachusetts, said two of Athena’s Connecticut nursing homes had received enough tests for all of their residents. The facilities – Beacon Brook Health Center in Naugatuck and Newtown Rehabilitation & Health Care Center – did not get enough tests for their employees, however.

“Right now the direction from DPH is that it’s residents only,” said Brown, referring to the state’s public health department. “We strongly support the state’s new initiative for testing all nursing home residents and hope that our staff will be included in future mass testing, as they are on the front lines of this pandemic.”

Officials with the Lamont administration said last week that they would begin testing “everyone” inside nursing homes – residents and staff. By Monday, the state said it had distributed 2,400 test kits to 20 nursing homes.

Reached Tuesday, Av Harris, a spokesman for the public health department, said residents and staff would be tested simultaneously.

“We’re doing staff as well,” he said. In a subsequent email, Harris wrote: “Testing capacity is increasing greatly in Connecticut and the plan is for staff and residents in nursing homes to be tested.”

But so far, nursing home leaders say that isn’t happening.
“Right now, it’s just the residents,” said Matthew Barrett, president and CEO of the Connecticut Association of Health Care Facilities, which represents 145 nursing homes in the state. “Is it as comprehensive or as risk-proof as testing everyone at once, including the employees? It is not. But it helps.”

“A more foolproof system would be one that tests the employees as well,” he added.

Nursing home workers have already begun to call out sick or quarantine after their exposure to COVID-19-positive residents. Barrett said that when all staff members are tested, the state needs to have a plan in place to deal with what is expected to be a surge in absences.

Lamont’s administration has billed the testing effort as a necessary step in stopping the spread of the disease, which has infected residents in 159 of the state’s 213 nursing facilities. As of Wednesday, deaths among nursing home residents represented 58% of all of Connecticut’s COVID-19-related fatalities.

The illness has harmed workers, too. At least five nursing home staff members have died from the disease, along with the husband of one employee and the mother of another worker. More than 700 employees have tested positive or reported symptoms of the virus.

“It’s really important that we continue to focus on our nursing homes,” Lamont said last Thursday. “We are now going out and testing everybody in the nursing homes.”

But it’s hard to contain the spread of the disease when staff can carry it into the facilities, even if they display no symptoms.

Neighboring states have begun ordering the testing of all nursing home workers. New York Gov. Andrew Cuomo on Sunday mandated that staff in those facilities get tested twice a week from now on. Nursing homes that do not comply can lose their operating licenses.

“With regard to nursing home testing … let’s just get everybody in the homes, everybody on the staff – let’s get them tested,” Pence said.

Access to testing has been difficult for many nursing home workers. Until recently, employees at those facilities needed a doctor’s referral to get tested, and results could take days.

“We have had reports of folks attempting to get testing and just not be able to get through the red tape to get the test,” Rob Baril, president of SEIU 1199, Connecticut’s largest health care workers’ union, told The Mirror. “Access to testing is so bad that workers have to self-quarantine. And testing is taking up to seven or eight days to get a result.”

Some facilities had taken it upon themselves to arrange testing for their residents and staff even before the state expanded its effort. Others are waiting on the state’s assistance.

“Testing staff is critical to reduce nursing home infections and give frontline caregivers peace of mind as they continue to show up to work every day,” Pedro Zayas, a spokesman for 1199, said Tuesday. “We don’t feel the testing is robust enough. We heard promises that the state is going to test all workers, but nothing has changed on the ground. We would like it to change.”

Not testing staff along with nursing home residents is unconscionable and extremely counterproductive.
For testing to accomplish it’s objective of reducing the high rate of cases and deaths of nursing home residents everyone who works in the building must be tested.
Your decision essentially creates a situation where the staff are at great risk of becoming carriers not only to their families but also to the very residents that testing is intended to protect.
Additionally, if just one staff member is asymptomatic, as is very likely, the facility can disinfect the place from top to bottom and test every resident but spread of the virus won’t stop. The current policy is like putting on a seat belt after the crash.

I challenge the decision maker or makers at the Department of Public Health to volunteer as a full time nurses aide in a nursing home for one week. To maintain scientific accuracy you will have to pick a nursing home where no testing has yet occurred and you’ll need to get tested in advance but once you start inside you are on your own. That incredibly bad decision at DPH will be altered very quickly, probably before the their volunteer week is out.