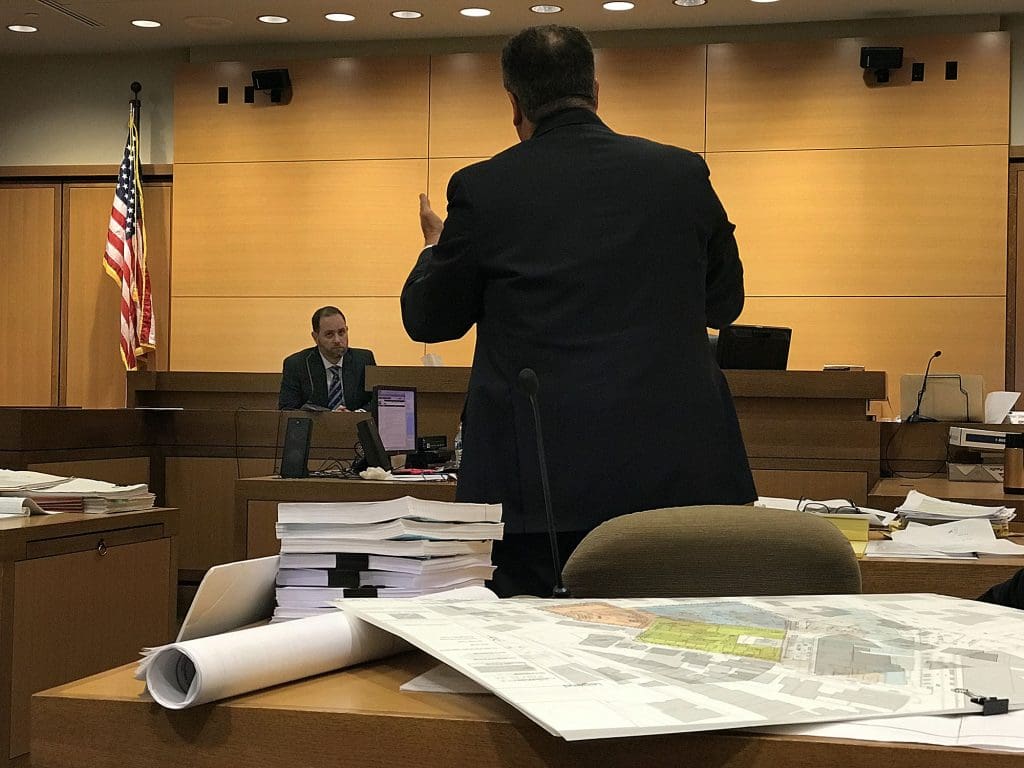 The lawsuit filed by the Norwalk Redevelopment Agency and the City of Norwalk against real estate broker Jason Milligan and Richard Olson of POKO Partners, among others, proceeds in Judge Charles Lee’ s courtroom in March 2019. (File photo)

NORWALK, Conn. — Judge Charles Lee is off the POKO lawsuit, to the City’s and the Norwalk Redevelopment Agency’s consternation.

A new judge will have to get up to speed on the intricately complicated standoff between the City and real estate broker Jason Milligan, resulting in much new additional court time, RDA Attorney Joseph Williams and Assistant Corporation Counsel Darin Callahan said in a recent pleading, asking the court to reinstate Lee.

Lee has reached the mandatory retirement age of 70 and been replaced by Judge Sheila Ozalis. He could continue as a trial referee if both sides agree, a legal source said.

Milligan, under multiple legal entities, is the most active defendant in the lawsuit stemming from his purchase of POKO properties, which the plaintiffs said was done in violation of the Land Disposition Agreement (LDA) for the parcels.

So what does Milligan think about the request to put Lee back on the case?

“I can tell you that I like and respect Judge Lee. He is a very intelligent and thoughtful judge.

“I can also tell you that there are state regulations that limit the age of judges for certain things.

“If the various lawsuits continue the course we on then we are looking at years if not a decade more of litigation. None of the actual trials have started. The main case that has been going on for 2 years is still in its infancy. The hearings we have had were preliminary. Discovery is nowhere near complete and my side has not been able to conduct any depositions despite numerous attempts.”

The public parties would have no comment in response to Milligan’s thoughts, Corporation Counsel Mario Coppola said.

Williams said Tuesday that he’s gotten no feedback from the Court on the request to have Lee preside over the case until its conclusion.

Lee has heard six days of testimony and received more than 75 exhibits, many of which were complicated real estate transaction documents, the Sept. 24 motion states. Lee “agreed to incorporate all of that evidence into the record for the trial on the merits of the Plaintiffs’ claims, thereby avoiding the need to present that testimony again.”

His “familiarity with the voluminous record presented in this case and its complicated legal theories, coupled with the advanced state and present procedural posture of this matter, demonstrate that, in the interests of preserving judicial economy and party resources, Judge Lee should continue presiding over this case through its resolution,” the motion states, arguing, “Any judge new to this case will require a significant amount of time to review the record and understand the numerous issues in dispute between the parties.”

The RDA’s motion to keep Judge Lee on as the trial judge cannot prevail without Milligan’s consent. However, Milligan should be careful in his position. I’ve had cases with Judge Ozalis before she was a judge and tried cases with her as the judge. She is all business. If I was in his position I would be begging for Judge Lee to come back.

Why is Jason Milligan always referred to here as a real estate broker when it’s obvious that he is now the major investor in this part of Norwalk? Maybe the RDA should start thinking long game as it now seems this will not end anytime soon. Let’s face it it – this is a huge embarrassment on the city skyline. A busted multiI-family job in the greatest period for this product in commercial real estate history. Then again this is Norwalk.

Rather than sue Mr. Milligan, why not work with him?

I refer to myself as a Real Estate Broker and I appreciate that Nancy calls me that. The next most accurate terms would be landlord.

I do not consider myself a developer even though some of my activities fit in that category.

This article and Adam Blank’s comments are factually inaccurate or at least misleading.

Judge Lee has been furloughed.

There is nothing that the city or I can do to force him to be the judge going forward even if all parties agree.

It is also important to note that judge Lee was presiding over 4 or 5 cases surrounding POKO / redevelopment. It would be a full workload for a retired judge during Covid…

I like and respect Judge Lee very much, but believe me it is not up to me to pick the judge.