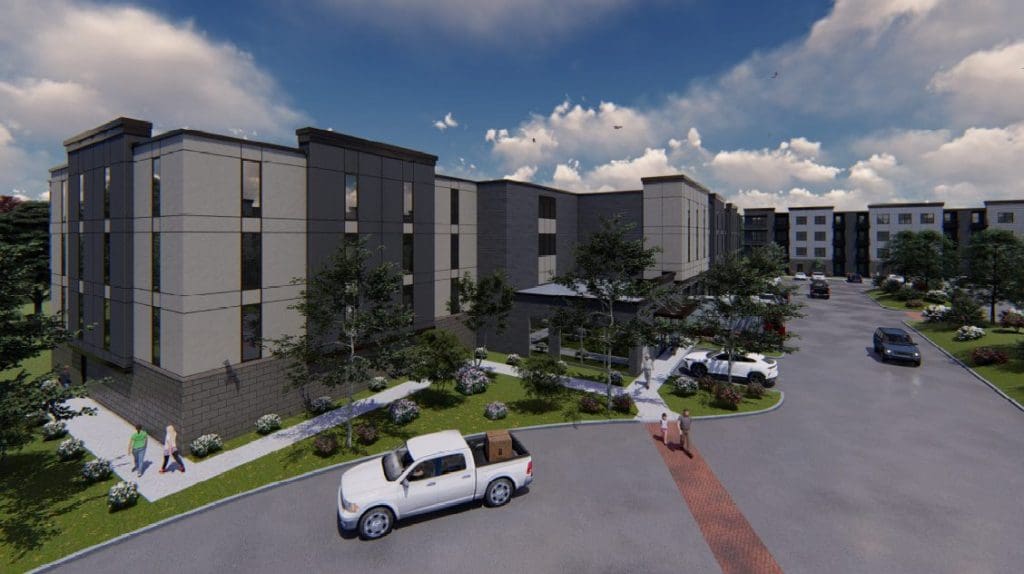 An artist’s rendering of the apartment complex planned for 10 Willard Road.

The Commission also rezoned a 0.85-acre wooded tract between Strawberry Hill Avenue and the planned complex from B Residence and Business #2 to entirely Business #2.  The developers, 10 Willard LLC, pledge to preserve the 0.85 acre as a natural buffer, according to their attorney Adam Blank.

Commissioner Galen Wells abstained from the vote, with no explanation being voiced.

Potential for solar or geothermal power at the complex is not yet known.  The developers first need to obtain a solar credit agreement from Eversource.  “They’re working to get that,” Blank said.  “It’s not going to come in a time frame that would work for an (additional condition) from you folks, or for them to close on the property.  Subject to obtaining zero emissions credit from Eversource, the applicant will … make reasonable effort to install as many (solar) panels as is economically feasible and feasible from an engineering perspective.  In addition, the applicant will explore the possibility of installing geothermal if it is economically feasible.”

“They are confident that the self-storage facility structure could support the weight load from the solar panels on the roof,” Blank continued.  “They’re not certain of that for the parking structure or the apartment building. That will come further down the road as they get more detailed construction drawings together. Geothermal is much more integrated into the design and mechanicals for the construction, and so they have to get much further along with their construction drawings before they can tell if it’s feasible.  We’re not at a point where we can definitively commit anything from an engineering perspective.”

Developer Jason Enters added, “Based upon preliminary calculations, there will be excess power generated if we get the amount that we want on top of the residential building, so that the residential tenants can use that electricity and it gets sold to them at a rate that’s cheaper than Eversource.  And we would obviously be using it for all the public spaces and for the public space in the storage building as well.”

Commissioner Josh Goldstein asked, “If you are able to get the credit from Eversource, is there a ballpark estimate of how much of the property would be geothermal?”

“If we get positive test results, we’ll definitely hundred percent heat and cool the self-storage building with geothermal…and our intent is to do the public spaces of the residential building,” replied Enters.

An easement granted by the Conservation Commission on March 10 cleared the path to approval. The 2.075-acre conservation easement exceeds the 20 percent acreage requirement for Zoning approval and holds the property owner responsible for maintaining the land.

Planned are 158 one-bedroom and 61 two-bedroom units, with 16 of the one-bedrooms and six of the two-bedrooms being evenly dispersed workforce housing units. A pool, a rooftop patio, and a dog park are also included, and several thousand plantings ranging from trees to shrubs and grasses have been proposed by the project’s landscape architect.  As to traffic flow, Enters previously told the Zoners  that  there will be no vehicular access from Strawberry Hill Avenue except for emergency vehicles, and that a traffic study by Frederick P. Clark Associates projects an additional 60 vehicles at peak morning hours, and 90 additional in the afternoon.

In other matters, Planning & Zoning Director Steve Kleppin voiced his expectation that a draft report of the East Norwalk Transit Oriented District plan would be “out for public comment in another 4 to 6 weeks.”  Kleppin also mentioned the planned industrial zone study: “We did have interviews with the consultants last week…we’re working on the specific contract language and we can start hopefully sometime in May.”

As is typical of a maiden voyage on Zoom, the meeting’s online transmission often sounded like an amusement park funhouse ride replete with electronic stuttering, intermittent echoes, assorted weird noises, and a barking dog.  When at several minutes into the proceedings Commissioner Nate Sumpter’s on-screen image froze, Chairman Louis Schulman’s attempts to contact him by phone and text proved futile until he finally thawed.

And here’s what Norwalk doesn’t need..More stupid Apartments!!!!! WTH is wrong with this City?!? Where is the Leadership?!! You get what you vote for!

What with the new norm and the virtual aspect now being put to use where does public interest stand? If locals wanted to add or express any point of perspective that is not possible. For that reason these decisions should be put on hold.

Sam, last night’s virtual meeting was a follow up to a pre-COVID public hearing held in early March. https://www.nancyonnorwalk.com/willard-road-conservation-easement-given-go-ahead/ That said, the Council Ordinance Committee is holding a public hearing via Zoom next week. There are three legal notices for that, which I linked to in this story: https://www.nancyonnorwalk.com/covid-19-wear-a-mask-dont-use-norwalks-boat-ramp/

To infinity and beyond! Great time to live on top of one another!

I don’t understand all the conditional talk about solar and geothermal. IF they get a tax credit, IF they get positive test results, IF it’s feasible…
The year is 2020. Why can’t our Zoning Commission REQUIRE that new constructions integrate solar, geothermal, and other forms of alternate energy into their plans BEFORE they are considered?
Am I missing something?
Great article, Paul. Love the perspective on Zoom meetings, which many of us are feeling these days.

Half the apartments we have now are empty,the road system is attiquaited, and the traffic is among the worst in the state. It leaves room for speculation as to the the honesty of the zoning board. Why would we want more useless apts. We are crammed in like sardines in a can. they build more

Dan- I am sure you are a great and meaningful guy, but your comments are just utterly lacking fact. The vacancy rate for apartments in Norwalk is 2%, not 50%. The grand list just showed a $450 million increase….and 75% of that increase was attributed to multifamily/mixed use properties. And, as a clear anti development person, you should research and understand the position you posit. You may not like the fact that Norwalk’s zoning resolution allows multifamily development, but from an intellectual perspective you should at least understand that it is as of right development and no one is “bending rules” as it relates to the ongoing growth of Norwalk. I have been in Norwalk since I was 10 years old and have seen the changes. Not everyone likes that Norwalk has grown into a full fledged City. If that is the case, then one should choose to live in a “town” versus a City. There are lots of towns in every direction of Norwalk. If fighting the natural growth of a City is causing you angst then you might want to consider moving to a town, rather than living in a City….and hating it.

Dan Cichowicz is 100% RIGHT – this is ridiculous that Norwalk CT will need another unaffordable upscale apartment building especially on this side of town. That road is antiquated and the Post Road already stressed beyond capacity. They must have greased a lot of palms to push this through. Not only that but Aitoro Appliance Warehouse work shop is so loud Monday through Sunday – not a moments peace for anyone living at 324 Strawberry Hill Avenue. Now we will have to put up with this dig , drill, jack hammer, ground & pound for years?

I live at Su-San Apt and any future tentant of 10 Willard Road paying a high rent have NO IDEA what they are in for living here…AITORO is non stop 24/7  18 Wheel Trucks barreling in & out all hours of the day & night, City Carting making pick ups at 4:30 a.m. for 25 minutes of banging so loud that never ends, endless hours of blowers blowing out the parking lot, New England Appliance Truck every morning pulls in and Idles the engine so the fumes spew out up into the apts, the appliance grave yard dump then another truck picks them up drags metal appliances on the concrete to make nails on chalkboard sound, the cardboard grinding machine makes a squealing noise that goes on for hours & hours like more nails on a chalkboard, mini forklifts/pallet jacks buzzing around endlessly forward then reverse w the beeping noise along w all the weird people walking around here…LAST BUT NOT LEAST  There is a TRANSMITTER TOWER in the middle of all of it — any WOKE MILLENNIAL LIBERAL will never want to live near the high tension wires or electrical currents of a Transmitter Tower.  Especially at the RENT IS TOO DAMN HIGH PRICES!    Good Luck!