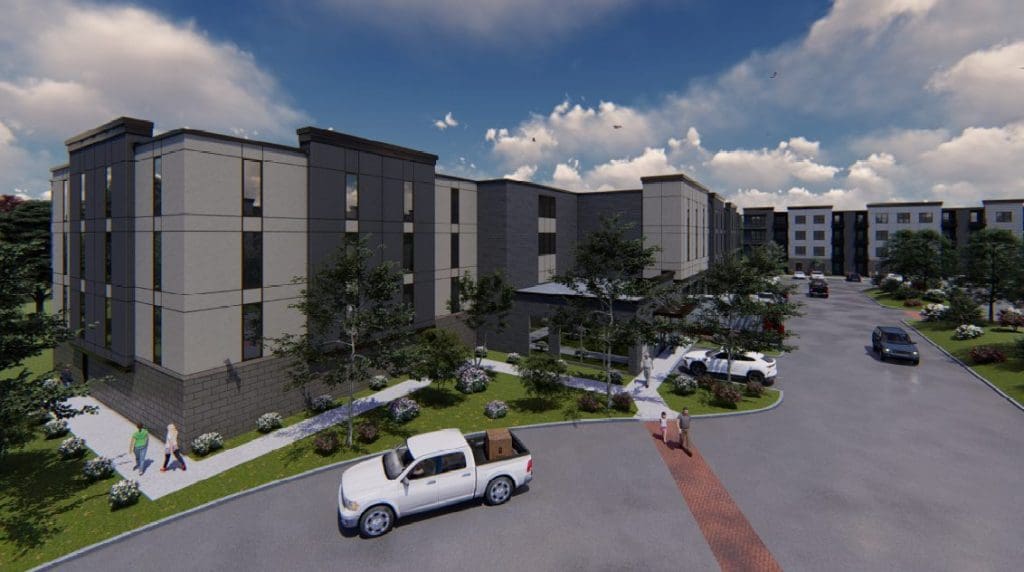 The proposed development at 10 Willard Road is shown in an artist’s rendering.

NORWALK, Conn. –The Conservation Commission voted unanimously Tuesday to grant an easement for the wetland area east of Strawberry Hill Avenue between Wolfpit and Westport Avenues, clearing the way for the Zoning Commission to rule on proposed construction of a four-story 219-unit apartment house and self-storage facility on adjacent land at 10 Willard Road.  In response to the Zoners’ prior request, the easement will require maintenance of the protected land by its owner.

The proposed complex would replace the Frontier Communications site off Westport Avenue. It would be built within the current footprint of the Frontier-developed area and would designate up to 2 acres as conservation land, as a natural undeveloped buffer to the neighbors. Zoners said last week that they couldn’t move forward without the Conservation Commission’s approval of the proposed easement.

The Commission’s lack of ability to police the land came to light during its deliberations.

“The (Norwalk)  Land Trust or some other group should be the overseers, because 30 years from now none of us will be here, and we won’t know what’s going on with that property, whereas if you had another group that’s committed to overseeing this stuff, it guarantees protection in the future” said Commissioner Ed Holowinko.

“The question is active stewardship.  We can’t do that.  We don’t have staff to go out there, inspect the land and make sure that you’re living up to the easement” said Commission Chairman John Verel.

“Well if that were the case, then the Conservation Commission would never take an easement,” said developer Jason Enters.

“The benefit is that you get some control” said the developer’s attorney Adam Blank.  “We can put it in any nonprofit, who would have no stewardship, who would have nothing, and you’d have no oversight as to what the terms were of that easement.  We might do it with the Land Trust, but we might not.  If you want to have a say in what it is, and some oversight, you get that here.  We wrote this requirement (for the property owner to maintain the conservation area) with the zoning office, and it was our belief that it’s not required but that the city was asking us to do this.  We’ve got a whole lot of neighbors who look right at this area, so I think the policing part of it is going to take care of itself, and we’re going to handle the stewardship part of it.”

The Zoning Commission will likely revisit the application in their next meeting, scheduled for March 18.