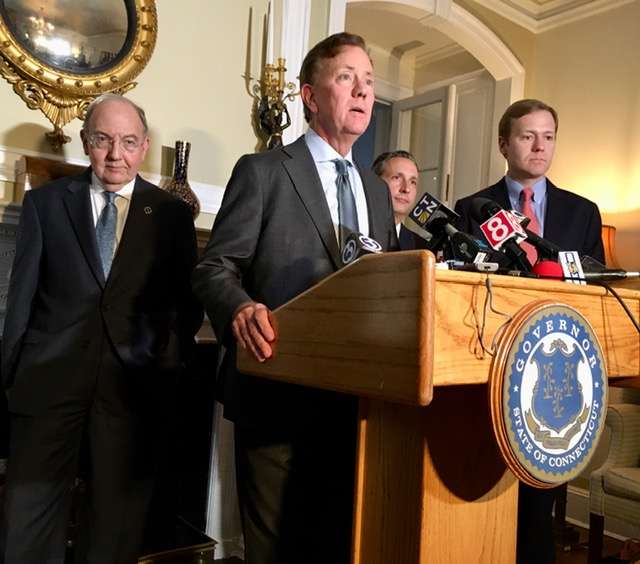 Gov. Ned Lamont, flanked by Sen. Martin Looney, left, and Senate Majority Leader Bob Duff and House Speaker Matt Ritter, is being pressed by legislators to share control over how the next wave of federal pandemic relief is spent. (Mark Pazniokas, CTMirror.org)

After ceding unprecedented authority to Gov. Ned Lamont during the first year of the coronavirus pandemic, the General Assembly is reasserting itself — just as Washington is poised to send more than $4 billion in new aid to Connecticut.

With a bill emphasizing its authority to appropriate discretionary federal COVID-19 relief, the budget-writing Appropriations Committee signaled the governor that legislators will play a significant role in deciding how this money is spent.

“This is about the legislature placing a marker in their role as a co-equal branch of government,” said Sen. Cathy Osten, D-Sprague, co-chair of the Appropriations Committee. “We hear directly from the people, and we want to make sure their voices are heard.”

The $4.2 billion that Connecticut could receive under the latest federal stimulus plan — and more specifically $2.7 billion in funds that come with few strings attached — would be a game-changer for the next two-year state budget.

Lamont said he had little discretion over how the initial pandemic relief was spent, but he did not challenge the authority of lawmakers to set spending priorities in the state budget, including discretionary federal aid.

“If I have a lot of discretion over that, my feeling is the Appropriations Committee should be involved in that,” Lamont said. “I say that with some trepidation, because it’s going to be a grab bag. But let’s see how much discretion we have, and then absolutely get the legislative leadership and the key committees involved in that. But right now, we have no idea.”

Like previous rounds of federal pandemic relief enacted last year, the package passed by the H0use and awaiting action in the Senate includes unemployment relief and funds to cover coronavirus-related expenses.

But unlike past federal efforts, this one includes billions that Connecticut can use to support the state budget, and another $1.5 billion earmarked for school districts, municipalities and regional government entities.

Coupled with Connecticut’s $3 billion rainy day fund, that would enable state officials to wipe out any deficit, avert major tax hikes and make additional investments to help the state recover from the coronavirus.

Operating under emergency powers granted by the legislature, Lamont has managed state finances with less-than-usual lawmaker oversight since the coronavirus was detected in Connecticut a year ago.

That has created tension with lawmakers at either end of the political spectrum: conservative Republicans chafe at ceding power to the governor, and progressive Democrats grumble that Lamont has been too parsimonious, especially with aid to non-profits facing increased demands for services

The existence of the bill, and leaders’ intent to pass it, carries considerable significance, while the specifics may be redundant: The governor does not challenge the legislature’s power of the purse.

With federal relief potentially coming before Lamont’s emergency powers expire on April 20, the governor’s fellow Democrats in the legislature’s majority felt it necessary to clarify matters.

“My caucus wants to make sure,” said House Speaker Matt Ritter, D-Hartford. “It would not be the first time the legislature clarified existing law.”

“One of the General Assembly’s primary responsibilities is to appropriate funding including any federal funding where discretion is provided,” said Senate President Pro Tem Martin M. Looney, D-New Haven, who called the relief package pending on Capitol Hill “an issue of major concern to Democratic senators.”

The legislators’ concerns stem, in part, from Lamont’s handling of state finances since the pandemic began.

The Appropriations Committee has clashed with Lamont’s budget director, Melissa McCaw, over how previous rounds of federal relief funds have been spent.

Walker, Osten and others on the committee have pressed Lamont to utilize more federal and, if necessary, state resources to expand Medicaid eligibility and bolster resources for social services.

The pandemic “has pushed people more into areas of desperation,” Walker said. “We’ve seen kids stealing cars just so they have an area to sleep.”

“I’m very hopeful, even optimistic, about a rescue plan, very much like the House package, will pass in the Senate,” Blumenthal said.

The goal is to have a bill on President Joe Biden’s desk in 10 days, before enhanced federal unemployment benefits expire on March 14.

Murphy added he expects the U.S. Senate to pass a relief plan “without delay.”

Lamont pledged earlier this year when his emergency authority was extended that he would work collaboratively with the General Assembly to decide how to use any new federal relief.

Ritter said that the legislation wasn’t raised for a public hearing next week simply to trigger that conversation and that he expects the full legislature will adopt the measure, likely with bipartisan support.

The top Republicans in the state legislature agreed.

“It took the Democrats a little bit longer, but I’m pleased they’re finally joining Republicans in the cry to assert ourselves as a co-equal branch of government, and I think this bill will have broad support,” said House Minority Leader Vincent J. Candelora of North Branford.

The House GOP leader had objected in early January when Lamont’s emergency powers were kept in place through April 20, instead calling for an extension only through March 1. He also wants a detailed legislative analysis of all the governor’s executive orders since the pandemic began.

“The General Assembly is a separate but equal branch of government and therefore must have a voice in what’s going on,” said Senate Minority Leader Kevin Kelly, R-Stratford.

Let Lamont handle the $$$, keep the legislators out of it! I didn’t vote for Lamont but I think he’s doing a great job. The man has common sense.

Awesome. I can’t wait for $10 gas and loaves of bread.

Let’s use this windfall of money to reduce the sales tax so that restaurant’s and retailer’s can bring back customers and maybe survive. Let’s give consumers a tax holiday and get more people back to work and shopping and dining. Creating jobs.
Lamont has done a great job with Pandemic relief. He is the only person I would trust with these wasteful Biden Bucks.
If Bob Duff and his merry gang get a hold of these dollars. They are wasted. Might as well burn them.

Keep our state legislators out of it. They are ruining CT. I back up Sue’s comments. Lamont has common sense and is doing a good job. He is a moderate and not some crazy extremist. He will ensure the money is fair to all and not just the progressives that our taking our state down.