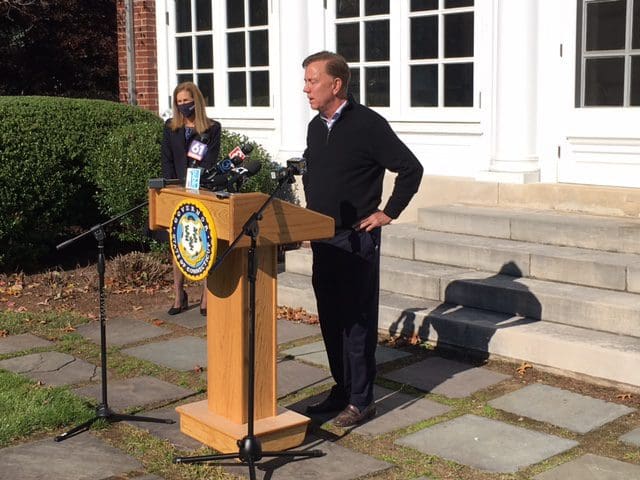 With increased rates of positive COVID-19 tests in Connecticut, Gov. Ned Lamont on Thursday announced a new restriction on private social gatherings, including holiday celebrations in people’s homes, saying no more than 10 people may congregate at a time.

Further, the state Department of Public Health issued an advisory late Thursday recommending residents stay home between 10 p.m. and 5 a.m. The advisory does not apply to essential workers or anyone who must leave home on an emergency basis for medical care or to purchase food.

The small gatherings have been blamed for a rise in COVID-19 cases across Connecticut and in other states. The 10-person limit applies to indoor and outdoor meetings.

“It’s those informal, private gatherings where we’re seeing the ignition taking off in terms of the infection rate,” Lamont said. “That’s a tough one. I’ve got to count on your self-monitoring this as well as you can. Thanksgiving dinner: 10. That dinner party: 10. And we’re recommending that people be home by 10 o’clock at night.”

The governor said that although state officials have been good about enforcement actions in businesses, the limitations on private gatherings will be “on the honor system.”

His announcement came as the state prepares to tighten restrictions on restaurants and event venues. Beginning Friday, restaurants must reduce their capacity from 75% to 50% and close their dining rooms by 10 p.m. No more than eight people can sit around a restaurant table at a time.

Event venues must limit their capacity to 25 people indoors and 50 people outdoors. Places of worship can welcome no more than 50% capacity, or 100 people, and no more than 100 people can visit a movie theater at a time.

Connecticut’s coronavirus positivity rate dipped slightly on Thursday, to 3.7%, down from 4.2% a day earlier. The total number of infections statewide reached 77,060. Eleven additional deaths were reported, bringing the statewide total to 4,656.

Will the next edict from Lamont force my wife out of our bed and into the basement? First he forces restaurants to close at 9:30 (I guess covid only comes out at night) Now Thanksgiving Outdoors is maxed at 10? So max inside AND outside is the same? Where’s the science on that? So, you can have 10 people in a 100 Sq ft room, but you can’t have 11 people on a 1,000 Sq ft driveway? Will 2 people sharing the same bedroom be prohibited next? Stay tuned.

Because the virus only spreads at night. Because…….Science!

Come on, guys. When people get together at night we tend to drink. And when when drink we get more sociable. And our judgment, well, our judgment sure doesn’t improve. Do I really have to say this?

Listen, you really do not want to get this virus. I have a friend who has had migraines since April,lost her sense of taste,and feels fatigued,Since April! That may not be the case if YOU get it,but why take a chance? She is in her 40’s,no underlying medical condition.