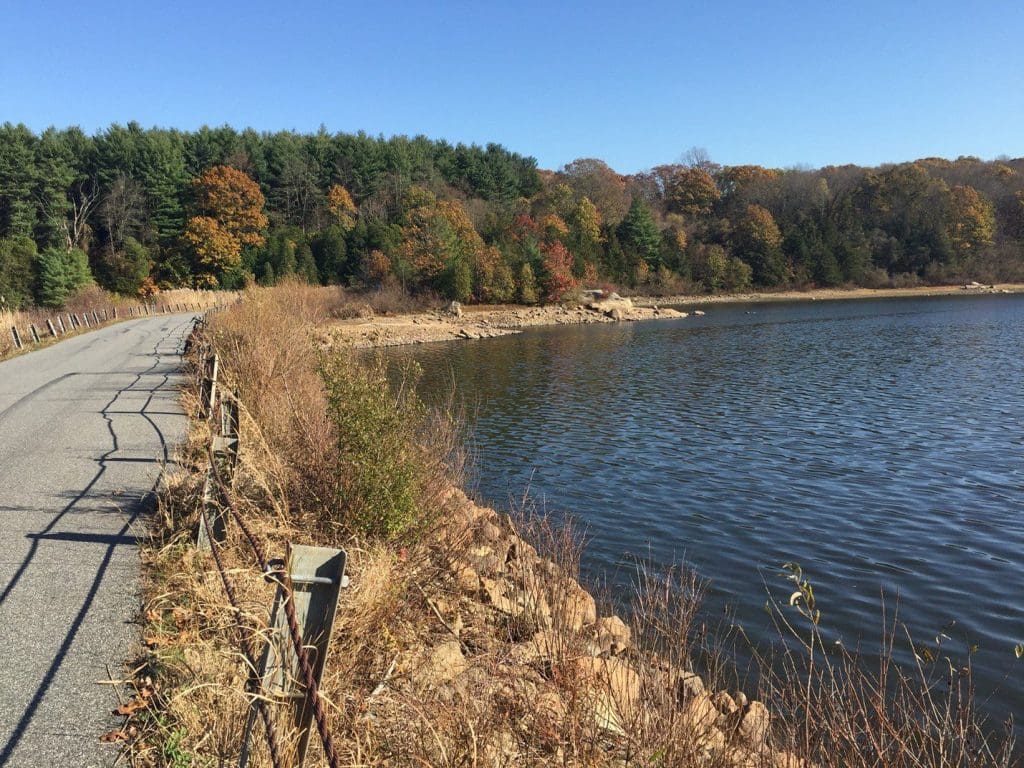 NORWALK, Conn. — South Norwalk Electric and Water (SNEW) began purchasing water from Aquarion on Wednesday. This will both improve the taste of its water, in response to complaints, and alleviate the effects of the drought, SNEW Chief Executive Officer and General Manager Alan Huth said.

Mayor Harry Rilling declared a water emergency Sept. 5. Usage restrictions are in place and violators can be fined $90 a day.

Huth gave a SNEW update Thursday via an email to NancyOnNorwalk:

“Our reservoirs are typically measured every Monday, this past Monday we were at 37.3%, about a percent lower than where we were a month ago, we are still considerably below normal levels for the year. Yesterday and overnight we recorded 1.2” of rainfall at our rain gauge in Wilton, there is more rain forecast for Friday and Sunday this week.

“Now that leaves are falling, the trees in our watershed stop consuming water and considerably more of this precipitation makes its way into the reservoirs. We anticipate that with this added precipitation, we will see more favorable levels next week.

“We continue to monitor the situation carefully.”

“The First District is currently at 53.3% capacity in our reservoirs,” Militana wrote. “Typically, the reservoirs are at 70% capacity at this time of year. Any rain is helpful, but we are still substantially below average. We continue to be in Tier 3 – Emergency/Drought Watch which is triggered when reservoir storage is less than 70% of average.”

A Reddit poster from West Norwalk wrote, “{O}ur tap water has tasted awful for a few weeks now. A little like dirt in it but it is crystal clear.” And another said, “Our water is not brown it smells dirty and has a chemical taste and it has been going on for over 6 weeks now so I don’t think it is related to main water break.”

The “earthy taste and smell” is due to a harmless organic compound, SNEW states on its website.

The key word there is “harmless” – it “poses no health risk,” SNEW said. A Google search turned up nothing to contradict that statement.

“Geosmin is a naturally occurring compound found in surface water and is what produces the musty, earthy odor that you may be noticing,” SNEW states. “The smell is a byproduct of algae growth, and the odor problem tends to be more pronounced late in the summer and in the fall season, it is exacerbated by low reservoir levels and drought conditions. Geosmin is produced by blue-green algae when they die.”

“Though our noses get dismissed as amateurs compared to some animals, there is one compound where we do really well; we can smell geosmin… at a level of 5 parts per trillion,” Hank Campbell wrote on the American Council on Science and Health’s website.

That’s five parts per trillion, and, “To put that in context, a shark can smell blood at one part per million. That means human noses are 200,000X more sensitive to geosmin, which is also the source of the earthy taste in some vegetables, than a shark is to blood,” Campbell wrote.

Geosmin is in beets, SNEW said.

“This year has been especially difficult due to environmental factors beyond our control,” SNEW said. “Although we are working diligently to reduce or eliminate the issue, the treatment options are limited. The good news is that the issue is temporary and will go away as we begin to refill the reservoirs.”

Huth explained to NancyOnNorwalk that “blending water from the regional pipeline” means that SNEW is buying water from Aquarion. This will “both help reduce Geosmin concentration and reduce demand on our supply.”

“The regional pipeline water comes from the greater Bridgeport water system, from reservoirs that are much deeper and did not suffer from the drought as much,” the SNEW announcement states. “We anticipate that this measure will dramatically improve the taste and odor situation until our reservoirs begin to recover from the drought. In addition, we have made numerous treatment changes at our treatment plant to reduce these compounds to the greatest extent possible.”

You know there is a problem when officials state: “Now that leaves are falling, the trees in our watershed stop consuming water…”

Eversource will do to the wqater supply/quality what they have done to electricity and NatGas in this state.
Also…beware of “blending”. We are not talking fine whisky here. Aquarion used to “blend” water with higher than normal concentration of pesticides with other water and pumped it to consumers. They probably still do.