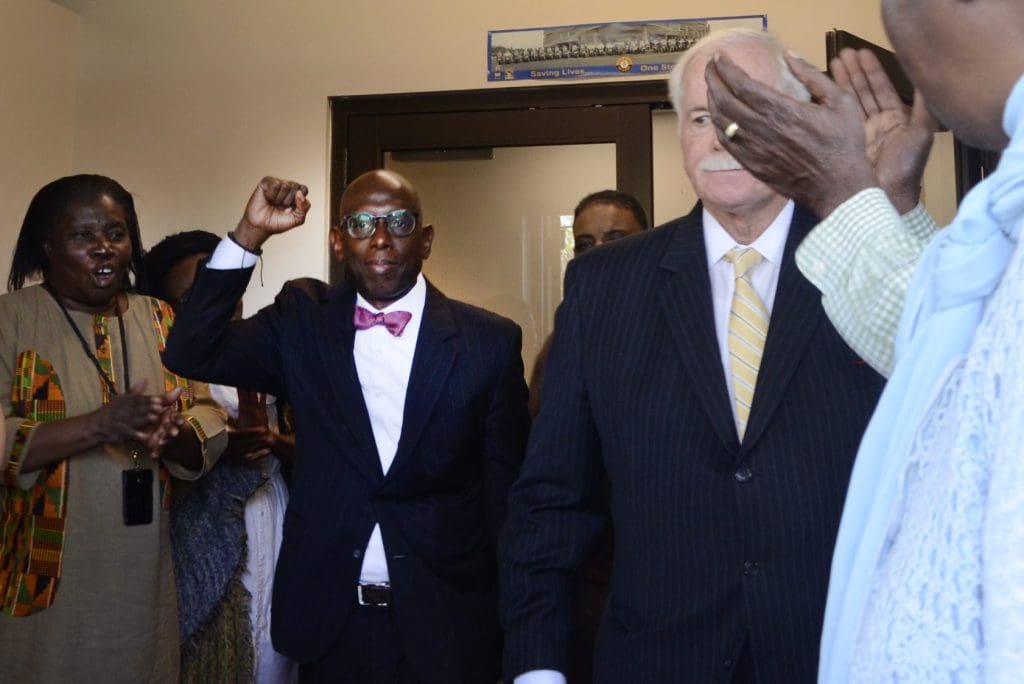 NORWALK, Conn. — Attorney Darnell Crosland has turned himself for arrest on criminal charges described by his lawyer as “way overboard.”

Crosland, a Republican Norwalk Common Council candidate who sought earlier this year to run for Norwalk Mayor, was charged with one count of Bribery of a Witness, one count of Tampering with a Witness and one count of Conspiracy to Commit Witness Tampering, all felonies. He was booked Tuesday afternoon at the State Police headquarters in Bridgeport, where 15-20 people gathered outside to support him, and released on $35,000 bond, he said.

All three offenses are class C felonies punishable by not less than one year nor more than 10 years in prison and a fine of up to $10,000 on each count, a state press release said.

“This is not about the police officers arresting me for doing something out here on the street that I shouldn’t be doing,” Crosland said. “I was arrested for the work that I do, by the Stamford State’s Attorney’s office. We are going to fight this thing to the end.” 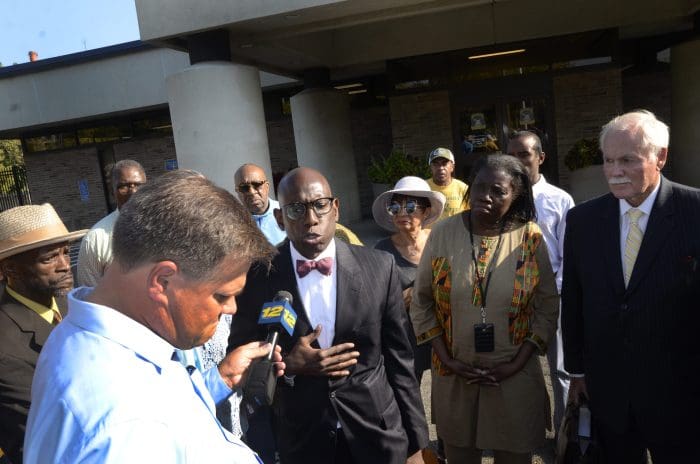 Attorney Darnell Crosland, center, speaks to a News12 reporter Tuesday outside the State Police headquarters in Bridgeport. At right is Attorney Wayne Keeney.

Crosland, a criminal defense attorney, said he was representing someone who is a co-defendant/victim with another person, and on another day “another individual” in the lockup begged him to take on his case. But when he found out the cases were connected, he referred that second person to another attorney.

“Somehow his activity has been misconstrued to have some nefarious purpose, which there isn’t any,” Attorney Wayne Keeney said. “So we are anxious to see what are they building this case on. We will find out pretty soon.”

“The investigation is continuing and the arrest warrant has been ordered sealed for 14 days from the date of arrest. The charges are merely accusations and Crosland is presumed innocent until and unless proven guilty beyond a reasonable doubt,” the press release said. “The case is being prosecuted by the Statewide Prosecution Bureau.”

On Tuesday evening, Crosland told NAACP members that both defendants are youths, according to a reliable source who was present. The warrant was signed in Litchfield, he is reported as saying.

He told supporters gathered in Bridgeport that the warrant was signed by a prosecutor who tried a case in Hartford, and, “I won that case and that same prosecutor signed a warrant for my arrest.”

He was in Costa Rica last week when he was notified of the warrant, he said, questioning the need for a $35,000 bond. Police know where to find him – in court, he said. Cases involving missing money are done on a promise to appear, according to Crosland.

“Darnell is a great attorney, he’s been an advocate for our community for many years. We are here to support him,” Connecticut NAACP President Scot Esdaile said. 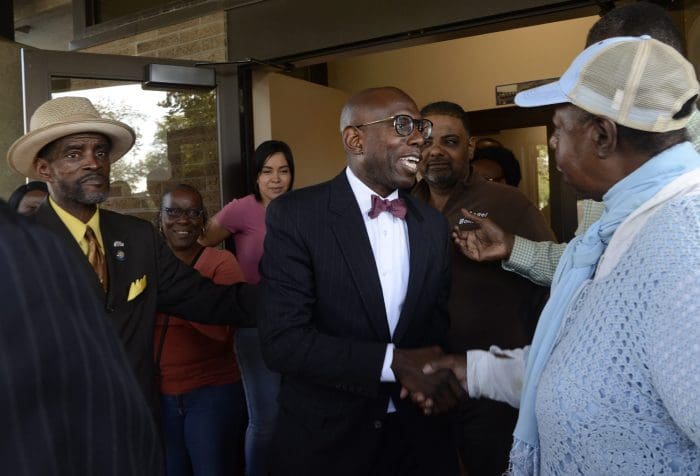 Crosland is former Norwalk NAACP President and an NAACP member. In September, he was named Criminal Defense Bar Man of the Year 2018 by a group of 20 defense attorneys, after winning five criminal cases in a row, according to the Stamford Advocate.

He’s fighting the system and “that’s what we need in our community because the criminal justice system has not been a friend of the black community,” Esdaile said.

“This is something that should have gone through the grievance process but they made it criminal. Who does that?” asked Bridgeport City Councilman Ernie Newton, who has had his own struggles with the law.

“It seems a little harsh by my standards,” Keeney said. “I have been at this game for a long time. I am 70 years old and I started in the criminal justice system when I was 20. So this is an extremely unusual set of circumstances.”

Keeney suggested that Crosland’s success might have something to do with it. 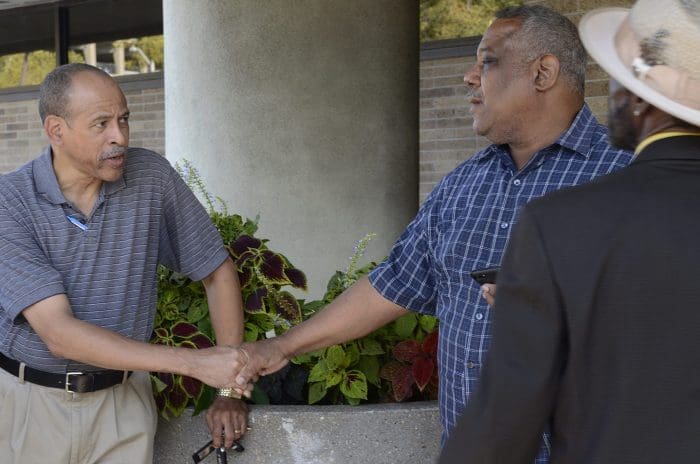 “He is the kind of guy who will fight for the average guy, particularly people from urban communities, give them the best representation they can get,” said Ralph Ford, who described himself as a Bridgeport psychologist, with clients Crosland has defended. “I think there’s a concerted effort to go after people like Darnell and Ernie, all those people who are willing to fight the system. There’s a concerted effort to get rid of them. They pose a danger.”

Crosland’s court date is Oct. 10. As someone who grew up in New York, he chose the date because of the radio station 1010WINS, he said, drawing laughter.

Crosland, a lifelong Democrat, became a Republican this year and sought the Republican endorsement to challenge Democratic Mayor Harry Rilling. When unaffiliated candidate Lisa Brinton got the endorsement, he said he’d gather enough signatures to force a primary, but later backed down and became a candidate for Common Council at large.

“We made a deal,” Crosland said Tuesday. “We are going to stack the Council with good Republicans.”

Republican Town Committee Chairman Mark Suda did not reply to a late evening email asking how this affects Crosland’s candidacy.

Crosland said he’s been knocking on doors and will knock on many more.

“The people who hate need anything to hate, so they are probably going to have a lot to work with here,” he said. “But the people who are strong supporters are going to be more supportive of the fact that I am nothing but a strong advocate and I serve the community. That’s all I do so we are going to be marching and knocking on doors and telling people that we are here to represent the people.”

Rilling wrote, “Everyone is entitled to the presumption of innocence until proven guilty beyond a reasonable doubt. That is the basic foundation of our criminal justice system and as a law enforcement practitioner for most of my career, I subscribe to that doctrine.”

‘Wicked attempt to humiliate me’

“I can tell you this, I have never sought an unfair advantage in any of the cases I have ever handled. I fully understand what clients and their families face when they are before the court. And I zealously represent my clients and this is to the chagrin of some prosecutors.

“In this particular instance I simply turned down the request of a young man who begged me represent him. I explained that I can’t represent him because I represent someone on the opposite side. He asked could I refer him to an attorney and I referred him to a fellow attorney James Hardy. I had no further communications with the young man after that.

“What we see happening today is a wicked attempt to humiliate me, and it reminds me that nothing has changed since that letter from the Birmingham jail.

“I have a lot of respect for prosecutors and judges across the state and they have shown me support through this trying time.

“My family and I will make it through this and I will keep fighting for the rights of those with no fight left in them. Who God blesses no man curses and I will continue to have the audacity to hope for a better America and a better tomorrow.”

I warned you. He’s bad news. He represented clients who stole from this City. Now this? Not a good guy.

This is shameful, true or not for it to come to a matter where a judge signs a warrt for him… smh

Seems that when prosecutors in this state get trounced time and time again by successful and effective criminal defense attorneys at the trial level, the recourse seems to be to target the lawyer. It happened to Philip Russell 12 years ago. His record was steller. The response was to take him down. And they did. Now, here comes Crosland. Five trials won in a row; an effective defense of Ernie Newton embarrassing the Chief State’s Attorney. Response: take him down. This should send shudders up and down every citizen’s spine who wants to hire a defense lawyer: that when the state can’t prove the crime, and you don’t do the time, your lawyer will instead. Or shall I say “might.” Good luck empaneling a jury to convict him. His arraignment on October 10 will be cause for a rally outside the court house- he has a bazillion twitter followers and Facebook friends. The Stamford state’s attorney’s office will probably see backlash from the criminal defense bar for trying to intimidate them – perhaps they might force every case to go to trial and overload the state’s attorneys’ caseload. Perhaps they might lawyer-up themselves every time they have a pre-trial conference with a prosecutor. And with this publicity, Darnell might have already won election to the Norwalk Council as an at-large candidate from District B. But let’s wait to see to where the virtue-signalling path leads us.

Maybe he can call Al Sharpton to come help him out again. I am sure a judge wouldn’t sign the warrant unless there was some solid circumstances other than a winning record.

Off topic, but can someone please look into how much in tax breaks spinnaker real estate partners got in tax breaks as they continue development in the city.

Interesting his slogan is “Fix It”. Is this like fixing a fight or an election?

Lions and tigers and deep state conspiracies, oh my! When current reality doesn’t conform to ones’s desire the response on the right? Blame a shadowy cabal of leftists working to undermine whatever the GOP interest’s are at the moment. Mr Cavallo, your act needs polishing, it’s a mere “shadow” of your idol’s capacity as an idiot whisperer. 😂😂😂

Did you know that these days aluminum foil is much cheaper than tin foil and much more effective protection against suffering the mysterious impulses of absurdity from Martian radio waves?

Well said! A statement to equal the word salad the Orange Clown spews forth daily. Mr Cavallo, as impeachment proceedings ramp up, the administration will start to lose staff like rats fleeing the Titanic. Maybe there’s a spot there for up and comers like yourself?

Unless the City has changed the way it has presented information, the last time a citizen used FOI to attempt to collect this information, it was difficult to do, as the city didn’t list the value of tax abatements in the budget as an offset.

Spinnaker gets abatements for far fewer projects than people assume.

However, you may be interested in how the City values the impacts of these projects on revenue, and on city services. Particularly interesting is what they include and exclude in such an analysis.

See these two documents that produced an analysis in 2016, in which only net increases to property tax values were factored in, for example.

The straw that broke the camel’s back was shaming the state of CT for an overly harsh bond amount for Wagsohl, a man accused of crossing state lines to evade laws of owning high capacity magazines for assault rifles. Ways of relating to fathers include Boy Scouts, little league, outfitting an Arsenal?