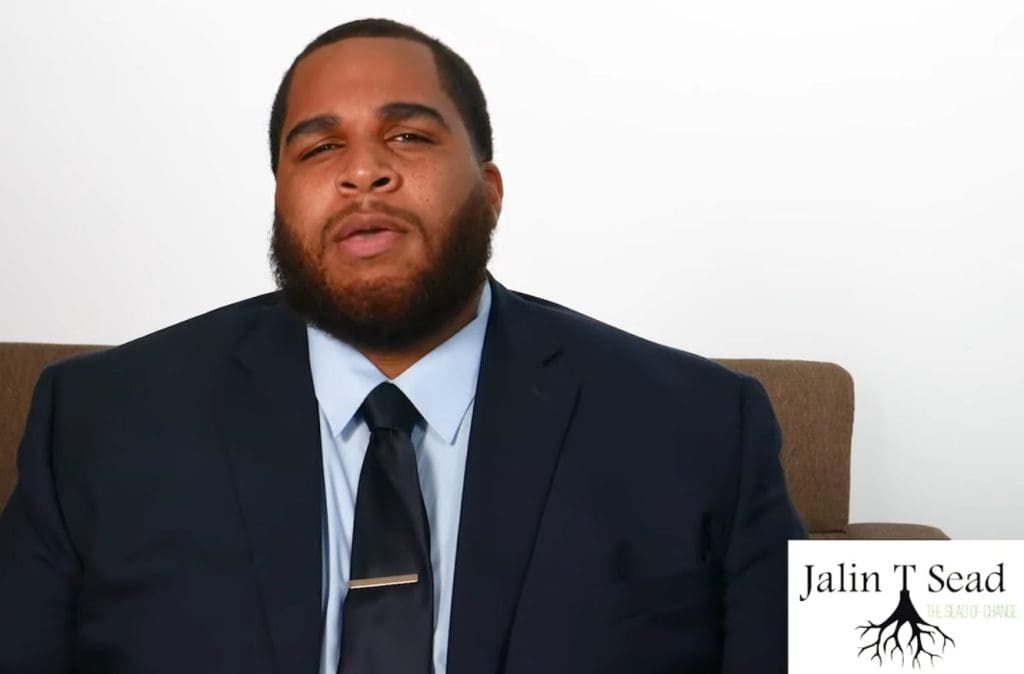 NORWALK, Conn. — Jalin Sead would like to be the next Norwalk branch NAACP President and is beginning his campaign early.

Sead announced this morning, ahead of today’s Juneteenth celebration, that he is running to replace Norwalk Branch NAACP President Brenda Penn-Williams. The election is in November.

“My intentions aren’t to divide or tear her down as a leader, I have a different leadership style and different opinion on my vision. Nothing against her, I’d love to work with her,” Sead said. “… I think the community needs something new. I think that the civil rights in Norwalk needs a breath of fresh air.”

Sead’s platform includes creating an African American Chamber of Commerce for Norwalk and working with “our city’s top fitness and nutrition experts to help get us healthy.”

“We’re living in unprecedented times. And it’s time for new and unconventional solutions. I know the challenges ahead, and I know that it’s not an easy task. But we cannot keep facing these problems in the same manner we have for far too long” Sead said, in a video he released at midnight. “… As a team, we will move from a system of reaction to organization of proactive solutions for the advancement of our people.”

Sead, 27, is a Fair Housing Commissioner and was recently appointed a First Taxing District Commissioner. He works at Hocon Gas in accounts payable and customer service, and founded JCA Outreach to advocate and provide mentoring for the youth, earning him the Young Entrepreneur of the Year Award at NFTE’s (Network for Teaching Entrepreneurship) annual Dare to Dream gala in April, 2011.

The lifelong Norwalker sought to be Norwalk NAACP President in 2016, when Darnell Crosland stepped down, losing to Penn-Williams. In 2017, he left the NAACP and founded Connecticut Coalition For Change (CC4C). He’s on the Democratic Town Committee and has served as treasurer. 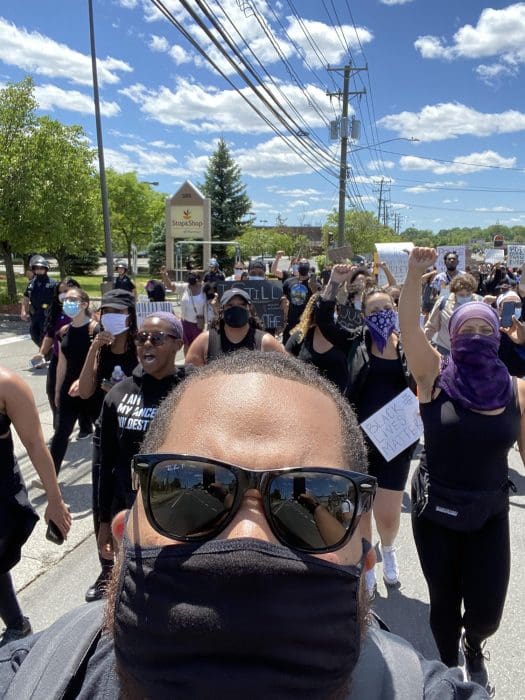 Sead has led three recent protests, two in Norwalk. He went to four or five protests in other towns, where no one knows him, because he wanted the perspective of people in the crowd.

There’s a passion, a need for change, he said Thursday. “I think a lot of people are listening… even people who really before didn’t really take notice of the Black Lives Matter movement. I think now their eyes are open to what is going on and I was excited to see that people really want change now.”

Young people, people younger than him, are taking the lead, he said. He’s been marching with them and listening, to build trust.

“A lot of young people lost hope in (the NAACP) or think it’s like some secret society and they don’t know how you could join and become active pretty easily,” he said. “I think that’s across the board with politics and everything. They just don’t know that you can do it. I think they’re ready. I mean, I know they’re ready to really go and I just have to prove myself to them.”

Sead has released a video, hoping to recruit people via social media. Last time, he didn’t make an announcement until August or September, he said. But there’s a deadline – you have to have been a paying member for 30 days before the election to be able to vote.

“I think there’s work to be done to have people buy in to the program. I hope people enjoy the video,” he said.

In the video, Sead describes himself as a dedicated family man. He’s married and the father of Jalin, Jr., who will turn two in August, he explained to NancyOnNorwalk. He’s also very close to his siblings, aunts and uncles, and his mother, who raised five kids by herself.

Sead has helped organize Juneteenth weekend to promote black businesses. There are more Norwalk black businesses than people think, and just from the people who reached out to him he knows of 30 or 40, he said.

“The problem that I have seen is that they are really registered with the City,” he said. “They’re selling stuff but they don’t know really know like the process and everything.”

That’s why a Chamber of Commerce will help, just as it did for the Latino community, he said.

The new youth movement doesn’t want to kick out the older generation but hopes to add energy, he said, “really not just myself, Darius (Williams) and Kadeem (Roberts), or Eloisa (Melendez) as a Latino leader but also bringing in some younger African Americans and Latinos into the picture of not just politics but civil rights and activism.”

“We have lost neighborhoods to gentrification,” Sead said in the video. “Key African American educators have been targeted and our children continue to fall through the cracks in our school system. It is very clear that we have a serious racism problem covertly and overtly, right here in Norwalk. So why me? Because I care. And I understand that being a successful president requires effective and energized membership. I recognize the fragilities in our city that needs to be addressed, and I’m ready to change the narrative. Because I too have once fell victim to the social, political and economic disparities that are still prevalent in Norwalk today. It is now the time that we come together as one to change the trajectory of our community.”

I want to know what he will do about the development situation.

It’s one thing to talk a big game on gentrification, but the Norwalk NAACP and Norwalk Democratic Party has consistently fallen down on this issue.

It would be one thing if TOD was merely one arm of a larger redevelopment strategy. But it’s not. It’s the *only* arm. We’re building and proposing thousands of “market rate” (which is code for “expensive” and “luxury”) units for rich commuters, which inflate housing costs for all, while hundreds (if not thousands) of families are cooped up in no-lease housing at double and triple capacity.

And what are Norwalk NAACP/Democrats doing? Pretending that a handful of “affordable” carvouts will provide meaningful justice to these vulnerable families. Meanwhile our “Democratic” mayor happily attends protests to distract from the millions in giveaways to his TOD partnerships.

And his cronies get up at meetings to show off sketches of their fancy coffee shops, insisting that “no businesses will be pushed out”, even though I can clearly see my laundromat being replaced with said fancy coffee shops.

This is NOT justice for Norwalkers of color.

I hope Sead is eager to bring meaningful change and fight for real housing justice for Norwalk. Norwalk’s Republicans should not be the only alternative for progressives who want REAL progress.

I Love This!!!! The Youth are our Future! Best of luck!

How do I become a member of the Norwalk Branch of the NAACP?

@David Muccigusso The easiest way to find out Jalin’s views, is to sit down with him and ask him yourself. There is bad on both sides on the table. To group Jalin with all the Democrats and NAACP member is wrong. SOME REPUBLICANS in Norwalk say that people here in Norwalk base who they are going to vote for on their distaste for Trump. Yet your comment here seems to group Jalin in with the distaste you have for Mayor Rilling and his people. That seems a bit hypocritical. To find out Jalin’s heart, do your own homework. All the name calling and bickering is getting old,and gets the City of Norwalk. nowhere.

Good Luck..ease help your community by prioritizing STATE ELL funding which has been lacking. Every ELL dollar coming from the state frees up dollars to go to the kids of your potential constituents. I’m not sure if current leadership understands that…I don’t claim to know the inner workings of NAACP, but I understand kids, finance and arithmetic.

This is great to read, I was on the NAACP website for the Norwalk Chapter. It looks outdated and I feel it needs more information on how to get involved and what the NAACP works on.

I am a mid 30s Latina, I want to learn more about my community and become more engaged. I appreciate this artcile.

I was born and raised in Texas, lived in NYC then Stamford but now call Norwalk home.I cannot wait to get involved!

Once you get to know Jalin, you will quickly realize he not only has a commanding presence but a great grasp on the issues. He is an independent thinker that can lead the next generation. Good luck Jalin!

-John O’Neil. You spend a lot of time on NancyonNorwalk’s comments,speaking about the STATES ELL funding. If you are really that concerned about it maybe you can go to the state and lobby for change. Make it your torch to carry. PLEASE stop trying to pit the Blacks against the Latinxs. We should be concerned about all children. Children do not ask to be born or to be in our city. It is our job as the adults to make sure ALL children are educated equally in The City of Norwalk. Why do you feel that it is ONLY the responsibility of NAACP? Please enlighten me.

Brenda and her so called team need to go. I attended several meetings. There was no organizational stance or platform. I know 3 people that went to her for help and still awaiting help. They need to go, poor representation on what the NAACP stands for it’s a wonder this chapter is laughed at!

Wait…this is the guy who proudly takes a millennial selfie of himself while he’s illegally holding up traffic for thousands of people.
Peaceful protests are not allowed to block traffic, particularly on an interstate like I-95 during rush hour.

Olga, you can become a member here:

@Ms. Lauren: The reason I’m pushing the NAACP on this issue is pretty simple. 1) Local funds that would help poor children in Norwalk are currently being diverted to cover costs of ELL crisis. I’m sure you know that. 2) The NAACP has a bully pulpit they can use but don’t seem to be using to push our local legislators to get that funding from Hartford. My question is why? Are we not allowed to ask the question? When I get a logical answer I will stop asking that question. Can you answer that for me? 3) The editor of the CT Mirror lives in West Hartford. Do you realize West Hartford gets 2x the funds we do. If you know anything about West Hartford, you’ll know what a travesty that is. You are inferring something about my comments that is certainly not true. But hey, you’re entitled to your own opinion. I have an extra ticket to opening day for Mets. You’re welcome to come with me have a few beers and a hot dog while we discuss this further.

@John O’Neil 1.”Bully pulpit??” Can you please show me where NAACP’S mission statement says, bully pulpit. Please and thank you. 2. Since you seem to be so passionate about this, maybe you can develop a bully pulpit. Thank you for the invite, but I have a compromised immune system. So COVID19 has me homebond. Maybe someone from The NAACP can go to answer any questions you may have.

@Ms. Lauren:Bummer about the Met game. Hit me up with your address and I’ll drop by to watch the game on TV…
The NAACP has quite a bully pulpit and it’s been used to do many positive things over the years. As far as my own bully pulpit, maybe that’s a good idea, although my wife would kill me….in the meantime I hope you stay healthy. If you need anything at all please reach out. I’ll help in anyway i can..This Coronavirus thing has been tough on many people.