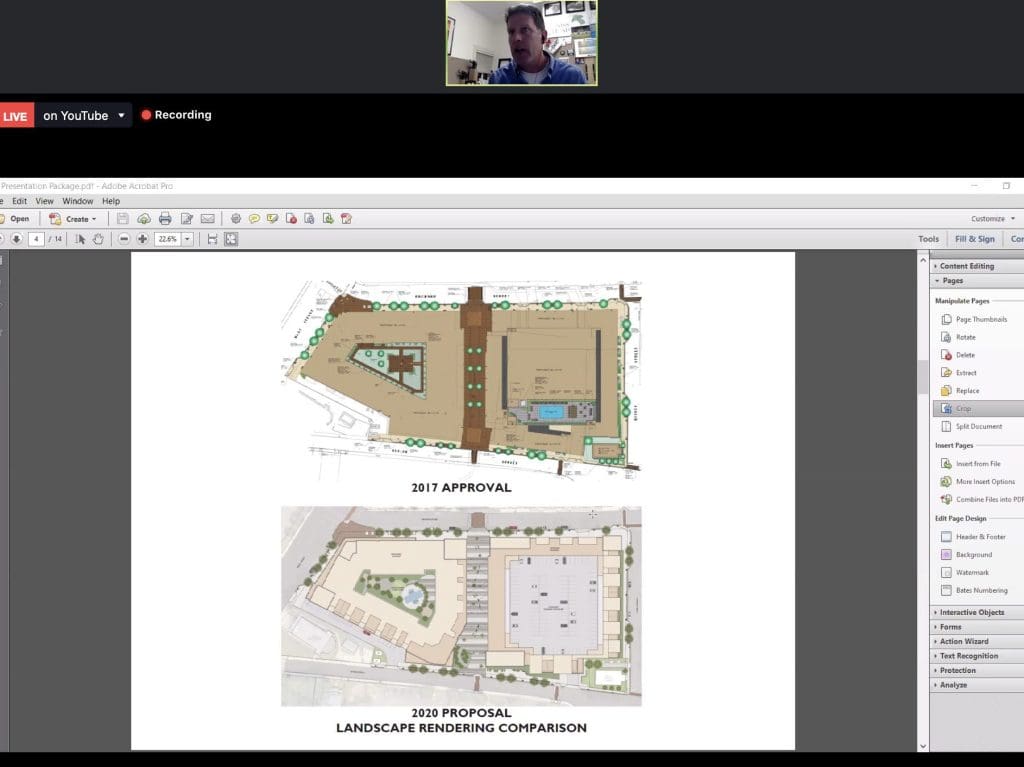 Craig J. Flaherty of Redniss & Mead talks to the Zoning Commission on Thursday.

NORWALK, Conn. — The multi-phased Waypointe development has brought more than 600 apartments and retail space to West Avenue since 2010, but the last phase, known sometimes as “The Pinnacle,” the former Loehmann’s site,” or the South Block of the Waypointe, had previously been stalled. But under new ownership, with Toll Brothers purchasing the Pinnacle in December, new plans have been submitted for the site.

“We’ve tried to get the South Block off of the ground several times before,” Craig J. Flaherty of Redniss & Mead said to the Zoning Commission on Thursday. “Now that Toll Brothers is involved, we’re closer than ever to kind of finalizing the completion of the vision with the Waypointe development. Toll certainly comes with a lot of experience, firepower, determination, and I think that’s good for the continued investment in Norwalk, and specifically in the central business district on the West Avenue corridor.”

The new plans call for more residential units, a significant reduction in retail space, less parking, and pedestrian walkway that would help link the other Waypointe developments to Mathews’ Park.

Plans for the South Block, a 4.6-acre lot on West Avenue between Orchard Street and Butler Street, across from Mathews’ Park, was first presented in 2011 and they were initially granted approval in 2014. They were revised twice, and the latest version, in 2017 included: 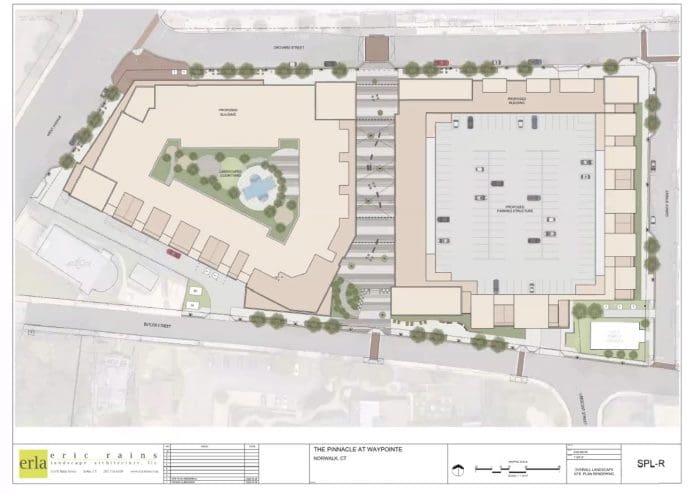 Detail of the plans for Pinnacle at Waypointe presented to the Norwalk Zoning Commission last week.

Flaherty said that gyms and theaters are struggling to survive, so including space for them here, made no sense.

“I am not aware of any gyms and theaters that are looking to expand and add new locations at the moment. Contrary, I think, unfortunately, they’re hoping to be in business a year from now,” he said. “Ultimately, I think removing those elements from this block is a good thing for Norwalk. One less theater means it’s more likely that your other theaters in town might survive. One less gym here makes it more likely that your other gyms might survive. Similarly, when you drive up and down West out there is vacant space that you can see. There is still vacant space in the other developed sections of Waypointe. And there’s vacant space still in the mall. And they’re, you know, very aggressively trying to fill that up.”

He highlighted the fact that more residents could help support existing businesses.

“We think adding more apartments for people to live in the Central Business District and become the folks that shop at play and work in their neighborhood,” he said.

Still, Zoning Commission Chair Louis Schulman said that he was upset by the decrease in commercial space in this project.

“I don’t want to sound cynical about this, but I think it’s worth pointing out that,” Schulman said. “I understand issues with retail right now. For sure. But I think the reduction from close to 100,000 square feet to 14,000 goes further than it should.” 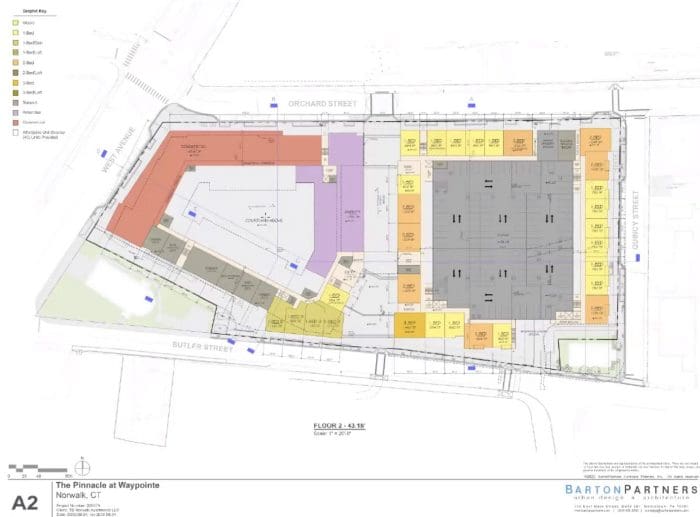 Detail of the plans for Pinnacle at Waypointe presented to the Norwalk Zoning Commission last week.

Schulman also said that he knew that residential could bring in more money for the developer than retail. “We’re talking about an additional 63 apartments, which will produce additional revenue, we’re talking about substantially less parking,” he said. “So it seems to me another way of viewing this and I’m perfectly willing to suggest that it may not be fair, but it’s certainly another way of looking at it is that almost everything’s done to increase the revenue generated by the project, reduce capital costs. But at a cost to the city in terms of retail for the community.”

Flaherty emphasized that they were bringing in assets for the community, including the pedestrian plaza, wider sidewalks, and more on street parking.

Commissioner Galen Wells said that she understood trying to focus the retail in the mall.

“I just want to say that I have sympathy for what Louis saying,” she said. “I also have sympathy for the fact that it’s very difficult to crack retail today. I was in The SoNo Collection recently. And there are lots of empty spaces. And we want to encourage The SoNo Collection because that’s a you know, an already existing huge development is trying to advance retail.”

Flaherty said that this was just the first step in the process, and they were open to revisions. Still, he cautioned that there was a reason previous versions of the plans for this space never came to fruition.

“I will point out that one of the likely reasons the three prior versions of the South block didn’t get built was because the margins didn’t work to attract investment,” he said. “So something did need to be done to change the equation a little bit to make it more likely this project will get through.”

The next step will be a review by the city’s architect, according to Planning and Zoning Director Steven Kleppin. 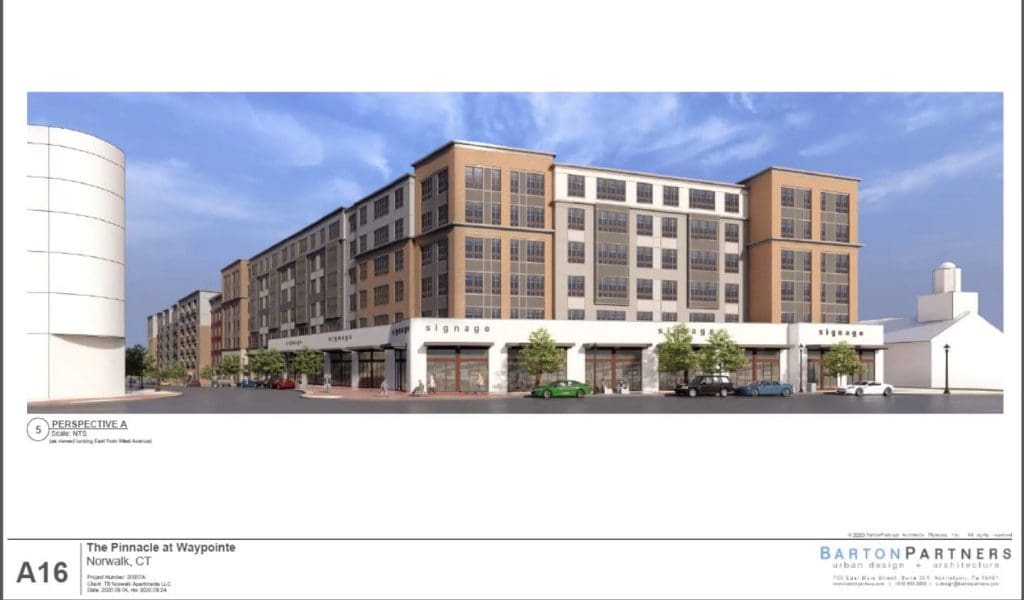 An artist’s rendering of the latest Pinnacle at Waypointe plan, presented to the Norwalk Zoning Commission last week.