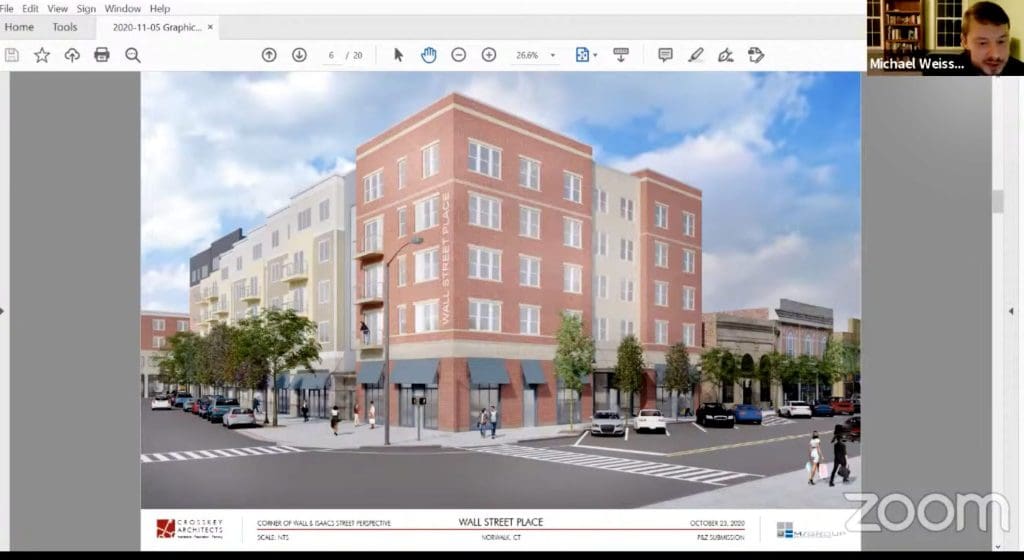 NORWALK, Conn. — The long discussed, litigated, and battled-over POKO project was in front of the Zoning Commission this week to present what attorney William Hennessey said was “hopefully the final” site plan approval. Jason Milligan, owner of eight of the properties surrounding the project, along with two of his attorneys, raised many questions, referencing the multiple lawsuits related to the plans.

Because the meeting extended late, Zoning Commission Chair Louis Schulman carried the public hearing over to the next meeting on Nov. 18 to allow for more public comment.

A look forward and back at Wall Street Place Development Plan

Hennessey, on behalf of the developer, JHM Group, and Municipal Holdings LLC, a subsidiary of Citibank, which currently owns the property, detailed its long history, particularly from 2016 when construction began on the project, but ground to a halt due to funding issues.

“It took a year for Citibank to acquire the title to the property, which in the scheme of things is probably not that long,” he said. “So by the summer of 2017, the lenders ,Citibank, acquired the title, and it began to analyze what it had — it didn’t really understand the project, it wasn’t the developer, it was simply the lender. That’s when my current clients JHM were brought into the fold. And JHM was asked to by Citibank, to analyze it, size it up with a plan.”

The former plans for the site, which were last approved in 2015, called for:

As they were constructing the new plan, they realized the automatic, underground parking garage was not going to work, so they had to find new space for parking, Hennessey said. Their original plan was to provide parking on the phase 2 site, but that property was purchased by Milligan from former-owner Rich Olson of POKO Partners, thwarting their plan to buy it themselves.

“In 2019, things began to look a little better, because there became another option presenting itself to Citibank and Municipal Holdings in the form of the Garden Cinema when it was announced by the Freedmens (the owners of the cinema) that it would be closing,” Hennessey said. “So, attention turned to that site, and it was eventually put under contract. And that is where we propose a building tonight with parking and you will see it to solve the parking problem.”

The new proposed plans were for 61 Wall St., the current half-finished building, and for 17 Isaacs St., or the former site of the Garden Cinemas. The new ones call for:

The city’s peer-review architect, Bob Grzywacz, made some suggestions, including adding some more retail down the Isaacs Street side. The applicant will review the suggestions and respond at the next meeting.

Schulman questioned how their retail space was divvied up because he had seen empty spaces in other developments in the area.

“The recent developments in Norwalk—the Avalon, the Waypointe, it seems to be difficult to attract appropriate retail,” he said. “And I’m coming to the conclusion that maybe we need to change our thinking on this retail and pare down the size of the individual retail spaces. So that you can attract true neighborhood retail.” 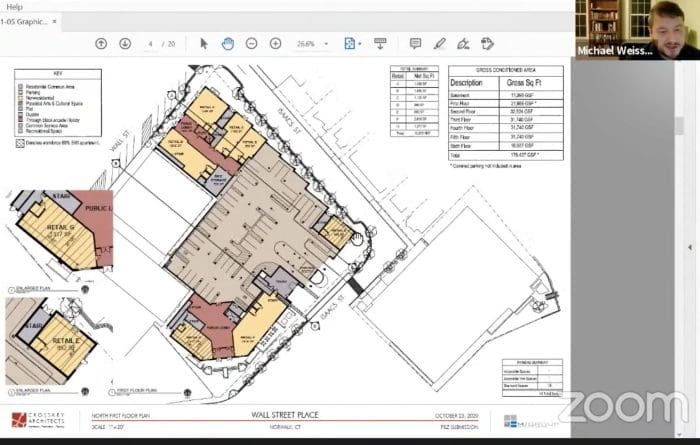 Project architect Michael Weissbrod of Crosskey Architects said the sizes of each would be small to accommodate that, from about 1,300 to 1,850 square feet, along with one larger retail space of about 2,600 square feet that would most likely be for a restaurant. There could be slightly more additional retail space, once Grzywacz’s comments were factored in, he added.

Todd McClutchy of JHM Group said that this will be a “mixed-income, mixed-use” development.

“The philosophy behind this is to make sure that the residents here are appropriately housed, and that they are not overly burdened with housing costs, so that they are able to go back out into the community and have disposable income to spend on things, particularly in locations like this, where it’s greatly amenitized around here, where you have a significant amount of employment centers, convenience, retail, entertainment and culture, as well as transportation,” he said.

Over the past year or so, the Land Disposition Agreement with the Norwalk Redevelopment Agency and the Common Council had been revised, Hennessey said.

“The process began in the year 2019, of going back to the Common Council and the Redevelopment Agency, for approval of a revised modified site plan, and a Revised Land Disposition Agreement,” he said. “You folks, you very folks, were very busy with your own activity. During that time, you were rewriting the CBD (Central Business District) regulation for this area. And you were very cognizant of what was going on. And you included a special provision in there to let this project be grandfathered.”

Milligan and his attorneys targeted the idea of being grandfathered in for a project that was not officially constructed, during the public comments section of the meeting.

Because the previous redevelopment plan for the Wall Street area expired in 2018 before the new one was adopted in 2019, there is no way to “grandfather” in the project, Attorney Dave Rubin, representing one of Milligan’s LLCs, IJ Group, said, presenting an argument central to his defense of Milligan in one of the lawsuits.

Rubin also called into question the “legitimacy” of the 2019 adoption of the West Avenue-Wall Street Plan, stating that members of the public raised concerns about the designations of blight in the area, which was necessary to designate it as a redevelopment area. This is the argument behind a lawsuit Milligan has filed, seeking to invalidate the West Avenue-Wall Street Plan. 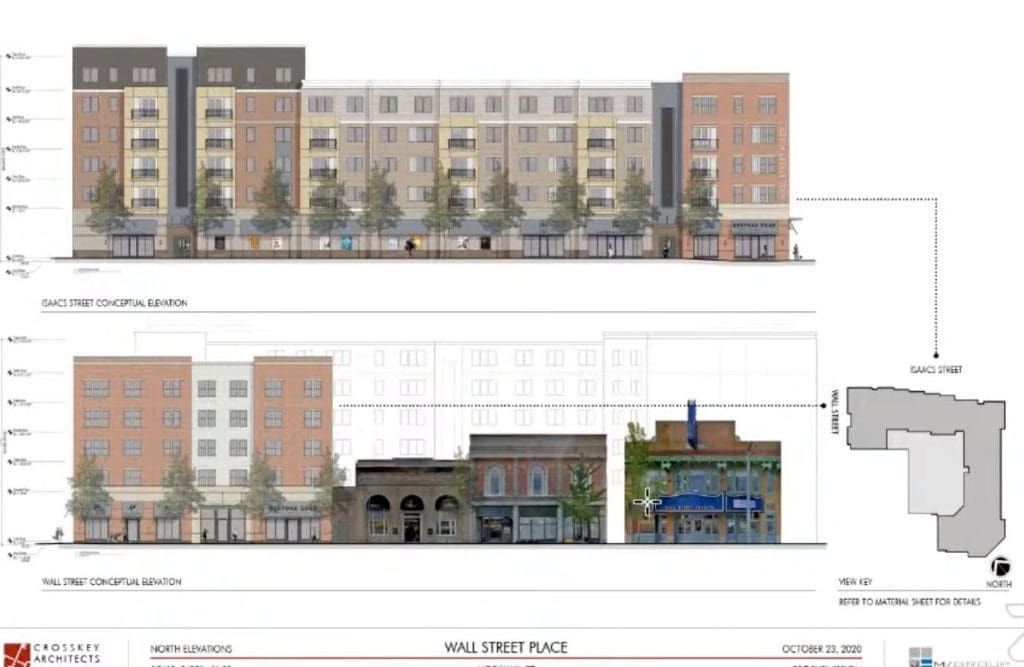 Renderings showing Wall Street Place in the context of the neighborhood.

Milligan, who noted that he owned eight abutting properties around the proposed project, said that he had five main issues with the plans — height, parking, drainage/sewer, lack of a loading area, and “spot zoning,” in addition to following up on Rubin’s concerns over grandfathering.

The proposed height of the building, which would be five stories to six stories, would not fit in, he said.

“Wall Street is an historic area with mostly older, smaller buildings. It’s got a lot of character,” he said. “And the current zoning regulations all recognize and appreciate the history and the character of the neighborhood. (They) all recommend or require a maximum height of four stories on Wall Street. And they have for years and years and years. The Tyvek building has been a real drag on the neighborhood. It was poorly conceived and executed. Why would we want to grant it extraordinary exceptions that would make it forever-and-always the tallest, most out of place building on Wall Street, towering over the other buildings? The building will never fit in with the surrounding neighborhood because the other buildings can never build that high.”

As for parking, Milligan said that as the neighboring property owner, he had an easement over part of the area they were planning to use for parking. Milligan is suing Citibank over this easement, which pertains to the Fairfield County Bank building he bought in late 2018.

“I have full access to that area,” he said. “They need to find a new spot for those parking spaces. And those are handicap spaces. So by removing those, they’re gonna end up losing four or five spaces. Now this is again another example of cooperation. The McClutchys did not create this scenario, it was created by the former developer. However, the McClutchys are in charge of fixing it. This is a relatively minor issue. In some ways, it’s a major issue for my bank and my tenants, and the ability for me to utilize my building. But it’s a minor issue in the grand scheme of remaking downtown.”

He also said that he has another easement over where they proposed to run drainage and sewer, stating that they would have to “redesign it unless we’re cooperating.”

Milligan said that they wouldn’t be able to have the proper loading space for the businesses at 61 Wall St., which was not only against the city regulations, but also harmful to the businesses.

“You’re gonna have businesses that are going to thrive and do well there,” he said. “You want to have the ability to bring their stuff in, in a proper way.”

Lastly, he argued that the property had been “spot zoned,” which means “singling out a small parcel of land for a use classification totally different from that of the surrounding area for the benefit of the owner of such property and to the detriment of other owners.”

Milligan highlighted language in city documents and plans that call for “keeping the historic charm of the area and has never recommended her than four stories for building height.” 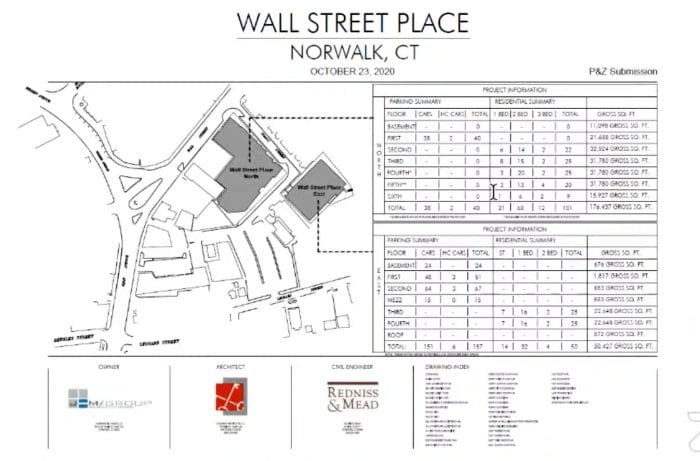 The plan for Wall Street Place.

Milligan asked the Commissioners to not give “any additional special treatment” to the project, such as allowing for the extra height, because they’re already gotten enough “special treatment and exceptions.”

Hennessey pushed back on a lot of Milligan’s accusations, stating that the Planning Commission approved a slight text change to the Plan of Conservation and Development, which makes the project consistent with its guidelines.

“The spot zoning issue raised by Mr. Milligan, you know, he recited a lot of words, but that’s unfortunately not the law,” he said. “The law in Connecticut is that a spot zone is something that is a very, very tiny nature, and geographically … is not consistent with our Plan of Conservation and Development. And the Planning Commission voted unanimously to approve the text change that just came down. And besides, this was not an issue that was ever discussed or raised when the prior plan was approved or (with) the recent text change.”

Hennessey said that they weren’t changing the height or mass of the building, which is why they were able to get the plan grandfathered in.

“All your regulation says is if you were part of a zoning approval, pursuant to an approved redevelopment plan, and it doesn’t conform to the new 2019 regs, you can still go forward with it,” he said.

“A lawsuit was brought… not by the bank, not by the party that abandoned the easement… so the lawsuit’s being defended. But we will give you a scholarly memo showing to you that issues, such as title issues are not within the purview of the zoning commission,” he said. “We clearly own the title to it.”

Hennessey said he would review documents sent over related to Rubin’s grandfathered argument and prepare a response before the next meeting on Nov. 18. 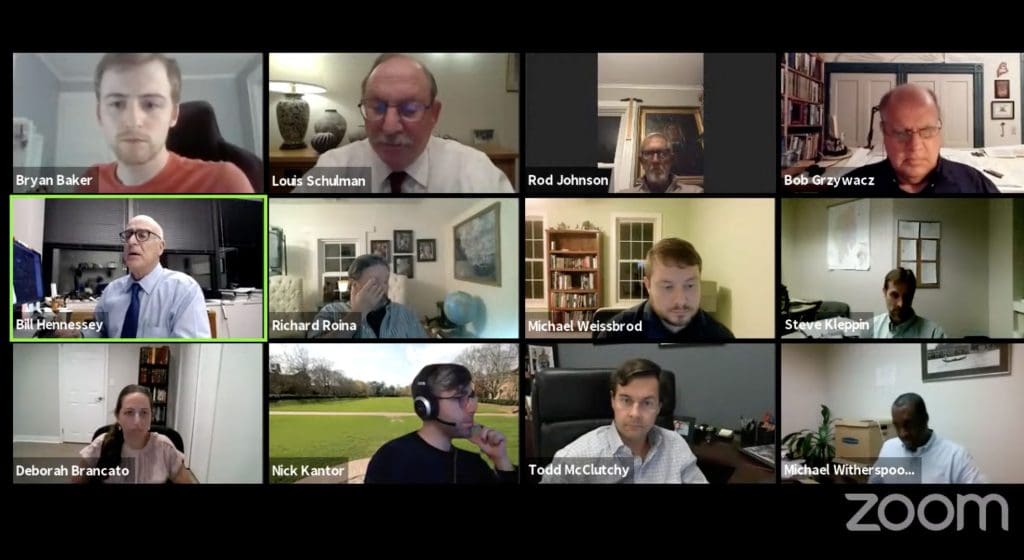 POKO has had enough special treatment!