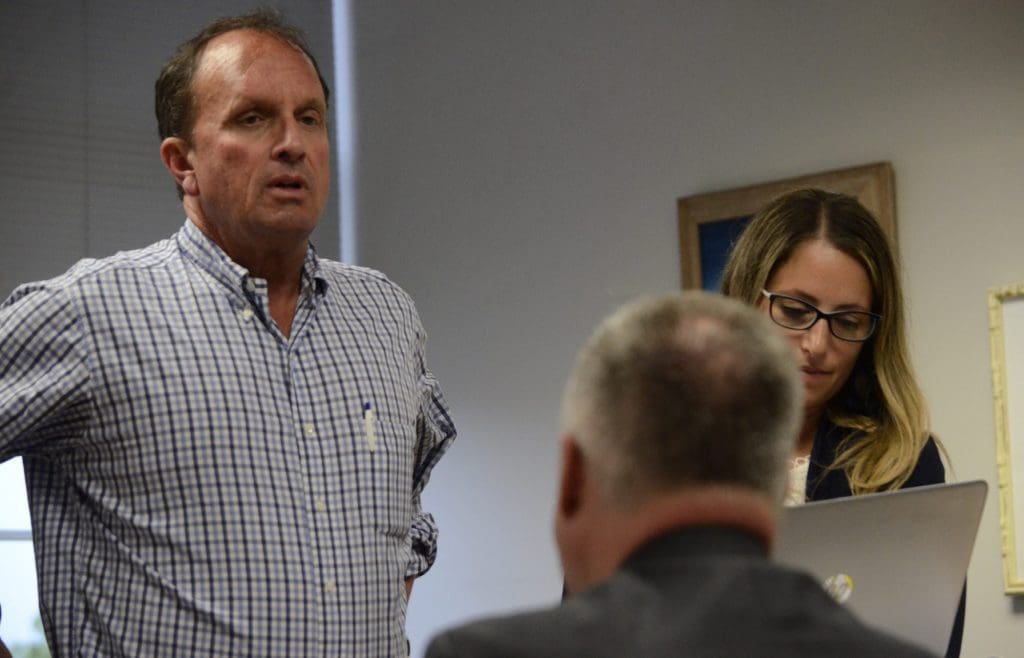 NORWALK, Conn. – Mike Barbis, chairman of the Board of Education, which carries responsibility for the finances of the entire public school system, is mired in personal financial issues of his own.

The Rowayton Condo Association is foreclosing on a garage that Barbis has owned since 2006. While researching that, NancyOnNorwalk discovered that the IRS in 2015 put a lien on Barbis for more than $1 million. The lien has not been released.

Barbis is unopposed in his bid for reelection. He is not forthcoming in explanations regarding the financial issues.

“This is my personal business. I work for free and I’m doing a service for the city,” Barbis said on July 26. “… This is not for public consumption. If I wasn’t doing all this work for free, I maybe would have more time to get this cleaned up.”

Barbis, a real estate agent, on July 26 said the lien is from a property that he owned and then sold. “They feel that more tax should have been paid. Basically, the accountant who was handling it died and so (the issue has) sitting (there).”

The Rowayton Woods Condominium Association states in its May 9 court complaint that Barbis owed nine months’ worth of $14.93 monthly common charges. It mentions the $1,030,352.57 tax lien, asserting that the IRS might claim an interest in the garage, and states that is is seeking $1,199.22 plus costs of collection, including attorney fees.

“When the door to a (condo) garage was replaced the company doing the work damaged the gutters – the company never paid for the repair and the Condo Association is now trying to foreclose over this,” Barbis explained in an email.

Court documents show that Barbis has been denied mortgage remediation in the foreclosure. He has not answered inquiries as to why he was denied.

On Monday, Barbis informed the court that he’d be representing himself. On Tuesday, the Condo Association filed a motion asking the court to declare in their favor, as Barbis has not filed a response.

The Rowayton Woods Condominium Association previously foreclosed on the condo garage, in 2012, listing Barbis “et al” as the defendants. The case ended with satisfaction of judgment, foreclosure by sale.

On July 31, NancyOnNorwalk sent Barbis an email with follow-up questions, seeking explanations for the list of tax liens. NoN also asked Barbis for a response to this statement:

“The BOE has responsibility for a very large part of the city’s expenditures.  Someone who manages his personal finances like this is presents a red flag for managing the allocation of public funds.”

He did not reply.

Time to step down.

I bet he didn’t reply.

Q: What AGI resulted in that massive amount of Federal Tax liability. State of CT Dept Revenue Svs also looking for him?

I agree with Mr. Lamb : Step down

Or someone please run against him.

This guy screams at parents, belittles people at meetings, rants on FB, the NAACP stuff…and now this. No one is running against him probably because they don’t want to be in his crosshairs, but why is our city and our students still stuck with him? Isn’t he accountable for anything? Dodging the IRS because he does volunteer work and his accountant died? And we are supposed to believe that he is making good decisions for our schools?

Nancy on Norwalk, no where in this ‘investigative’ report of yours do you mention that all these real estate problems were happening during the Great Recession. To leave out that piece of information is as best uninformed, at worst, deliberate. Real estate people (like Mike), home builders, construction workers were the first to fall during the Great Recession. All of America was hurting during 2007-2013. Connecticut the State has yet to recover financially, has yet to reclaim the jobs lost during those years. I think this article is junk.

I also find the timing of this article coincidentally interesting. Mike Barbis brings up that fact that Mayor Rilling’s plan for POKO, with its 100% affordable housing at mostly 40% and 60% of market rate (some 80%), will add as many as 48 kids to the school rolls at a cost of $800,000/year while only generating $175,000 a year in property taxes. Taxpayers are getting clobbered. People want Mike to button up. Is this a hit piece?

During the Great Recession, which was really a Depression, unemployment was at 21% per the GOA but was reported as 11% because the Obama administration did not include construction workers, home builders and realtors etc in the total count.
Seems that Mike Barbis was caught in this as a realtor and is still recovering.

The “great recession” was eleven years ago. Ancient financial history everywhere but Corrupticut.

Sue Haynie, the article states that Barbis was offered the opportunity to explain, and declined. Presumably he didn’t say the recession played a role. As such, it was not Nancy’s responsibility to speculate.

When anyone overseeing more than half of the city budget has seven figure unpaid taxes and, possibly, major financial difficulties, it’s in the public interest to report it.

If you have evidence that this report is retribution for something Mike Barbis said about POKO, please share it. That way we’ll know you’re not inventing conspiracy theories in response to unflattering news about Mike Barbis, who you seem to defend no matter what he does.

So…are we saying tax returns should be made public before running for board of ed.? Why stop there? How about someone’s diet? (Hamburgers are no longer the politically food item) Full disclosure – I’m a Philly Cheese Steak guy..I don’t know Mike Barbis, but the bottom line is whether Norwalk has benefitted from his input..Separate subject – Harry Rilling’s city is in much better shape than Mayor Pete’s South Bend. How come he hasn’t received Presidential endorsement from Senator Duff? I’ve spent time in both locales, and there is no comparison. It’s not too late..

I’d vote for a toaster over a Republican every single day of the week but if Barbis can’t clean up a lien that he owes to the city he’s trying to get elected to, he needs to STEP DOWN. It’s irresponsible and he should be embarrassed. I don’t see this as a hit piece, it’s public record and this information is just as relevant as the public record of Mark D’Amado that was reported on. How our elected official conduct themselves in their personal lives reflects on their judgment as representatives. We need to hold them accountable.

If we held all politicians accountable for their personal lives, we wouldn’t have any politicians to vote for..Ted Kennedy comes to mind.

Must admit I got a kick out of the vote for a toaster over a republican comment. What flashed through my mind was that toasters would have been preferable to those democrats the commenter seems to have voted for in the past. Connecticut has had a Democrat dominated legislature for almost four decades and as a result Nutmegers are, well, toast!

Marie, a clarification: the lien is to the federal government, not the City of Norwalk.

I’m wondering when NoN is going to dig into every other persons tax history that is on the BoE and running for the BoE? Seems to me that would be fair. Without looking into others history this feels like part of a smear campaign.

Hi Joanna. When I found this information I also checked the town clerk’s land records for Harry Rilling, John Igneri, John Kydes, Tom Livingston and Doug Hempstead. I found nothing news worthy. I do not have access to tax records. I called the IRS and was told that it is illegal for them to discuss the tax returns of individual taxpayers… however, tax liens are public information. I will check the records for the people you mention.