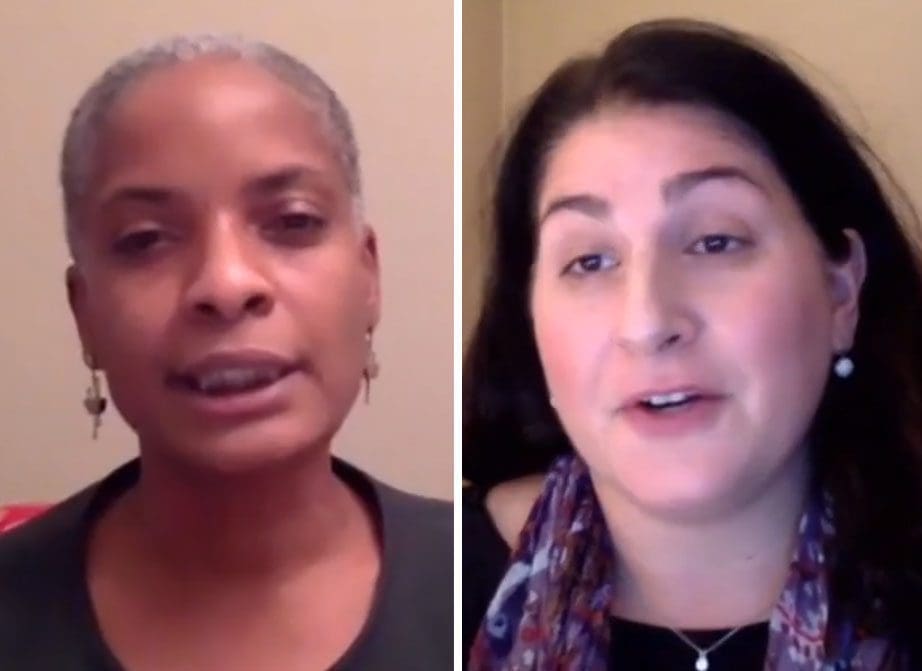 District 143 State Representative candidates, as shown in the League of Women Voters of Norwalk debate on Zoom: at left, Stephanie Thomas, a Democrat who lives in Norwalk, and at right, Patrizia Zucaro, a Republican who lives in Westport.

The election is scheduled for Nov. 3. Many Norwalkers are voting by absentee ballot.

NORWALK, Conn. — The two women vying for District 143, the only open local seat in the race for State Representative, appeared side-by-side on video last week, in an amicable League of Women Voters debate.

Republican candidate Patrizia Zucaro said “one of the number one things that we need to focus on is education.” Her Democratic opponent, Stephanie Thomas,  said economic development “is going to be the biggest challenge on our plate for the years to come.”

Both seek to fill the seat being vacated by Republican State Rep. Gail Lavielle, who is moving on after holding the post for a decade. District 143 is comprised of parts of Norwalk, Wilton and Westport. To learn your State Representative district, click here and enter your address.

Thomas lives in Norwalk. Zucaro is a lifelong Westport resident.

Thomas, who lives in Norwalk, is a small business owner with a master’s degree in nonprofit management. She has worked for 30 years as a fundraising consultant advising nonprofit organizations. She serves on the Norwalk Zoning Commission.

Zucaro, an attorney, said she “successfully defended small businesses and individuals in a range of complex situations.” A lifelong Westport resident, she “has many ties in Norwalk” and “certainly understands the needs of small towns like Wilton.”

Moderator Jean Rabinow opened by asking the candidates to name Connecticut’s biggest challenges and how the Legislature should best address them.

While economic development is a challenge, “I also think there’s a great opportunity there,” Thomas said. It’s not possible to budget-cut your way to prosperity, “but I’m sure there are some ways to reallocate funding.”

“We spend a lot of money on environmental spills, for example. If we put more money into enforcement, we might see a cheaper price tag there,” Thomas said.

“I want to introduce legislation requiring the state to give districts post-pandemic flexibility for a limited period to help students close learning gaps and move forward with their education,” she said.

Zucaro is also concerned about transportation, the economy and infrastructure, she said.

Asked how they would provide early childhood education to families given economics that are “marginal at best,” Zucaro said,“We’ve been requiring folks to get more and more education, which has become sort of a burden on finding teachers who are able to teach. And unfortunately, that drives the cost up. And so what I’d like to see is making sure that we are evaluating all the circumstances and providing the resources necessary and ensuring that teachers are able to teach, but also lessening them to the extent that we’re able to also provide those resources. We need to find balance in how we approach this. And it’s a very difficult and complex question and situation.” 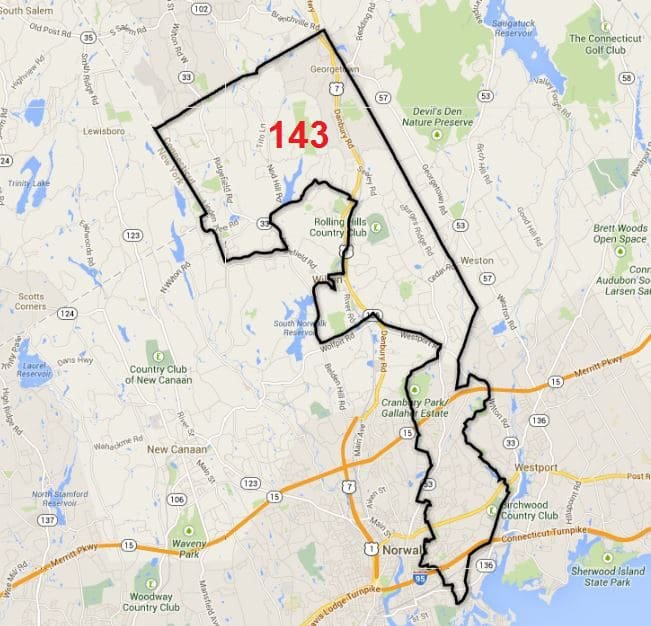 She added that she’d like to work with State Rep. Bobby Sanchez (D-New Britain), co-chair of the General Assembly’s Education Committee, on the issue.

Thomas said, “I think we all know by age 4 there are a lot of outcomes that are already set with in terms of literacy and development,” Thomas said, adding that Norwalk has many English Language Learners, as well as children with learning disabilities.

“It’s really tricky. I’ve been thinking about this a little bit,” Thomas said, suggesting that Connecticut replicate the model used by All Our Kin, a Bridgeport-based nonprofit that trains people how to open an early childhood center.

“I think if the state could partner with nonprofits in this kind of work, it both serves as business development … and provides early childhood care in the neighborhoods where it’s most needed,” Thomas said.

Rabinow asked the candidates how they would balance economic development versus health and safety in response to COVID-19.

“I will say I’m very happy that I reside in Connecticut, because I think we’ve done an incredible job of walking the tightrope that we have to continue to walk. I don’t think we can stimulate the economy if we lose consumer confidence,” Thomas said.

The feedback she’s gotten from small business owners is that people are reticent to spend money, she said. Social distancing and mask-wearing needs to continue.

“On the economic development front, as I said earlier, I think we have a really interesting opportunity now,” Thomas said. “For example, our corporate tax rate is 1 percent higher than New York’s, but much lower than Massachusetts and New Jersey. I call it a ‘move in bonus.’”

“I would love to coax some companies here from New York, and give them, match the rate or maybe even dip below the 6.5 for a couple of years and then gradually escalate them up to our current rate,” she said. “… It’s all tied together by public health. If people afraid to go out, if infection rates keep going up and up, I think we’ll risk slipping backward.”

Zucaro said, “We must continue to balance the data driven policy, public health imperatives with economic and social considerations, and the legislature must be included in (this) decision-making. Currently, Governor Lamont has done a good job, but his approach is to do it alone approach instead of getting the legislature involved.”

Zucaro continued, “We need to balance what health experts are saying. Again, safety is paramount but we also need to help businesses and especially small businesses… recover and grow by creating a much better regulatory, and administrative and tax environment … I know that during the pandemic, we’ve had some executive orders that were friendly to businesses, and if they if they work, let’s keep them.”

Thomas said the legislature has been involved in Lamont’s decision and gave a shout out to small businesses: “Gov. Lamont released new funds that basically … I call it ‘PPP light.’”

The Connecticut CARES Small Business Grant Program makes $5,000 grants available to companies with fewer than 20 employees or a 2019 payroll of less than $1.5 million.

She added, “The intentions behind the recent police accountability bill were good, but they were rushed through without committee scrutiny or proper public notice. …If we are hampering our police officers in any way, then the result is the victim…. is the person who’s going to feel the brunt of it. And so what was also amazing to me about the police accountability bill is that the legislature was literally saying while it was being enacted that they were going to have amendments to it after the fact.”

As for Black Lives Matter, Thomas said, “One of the most important ways I’ve tried to address it is running for office. It’s … nothing I had planned to do. But I think it’s important to have a diversity of voices in Hartford of all types.”

She said, “Every issue affects every person. So that’s the approach that I bring. I don’t want one law, because we have learned over the last many, many decades, that if legislation could solve every problem, we wouldn’t have racism.”

As for police accountability, “Most of that bill was generally approved by everybody,” Thomas said. “Everybody had a seat at the table. But as I said, you can’t always get 100 percent of what you want. And they think the police unions’ job is to fight for everything they want. But that’s their job. And that’s what they do. And I applaud them for that.

“Connecticut needs change,” Zucaro said. “For 40 years, the majority party in the legislature has been more focused on special interests and national level policies instead of doing the hard work at home and developing solutions for Connecticut’s issues.” State employees got raises while other people were losing their jobs, she said.

“My parents immigrated from Italy to Connecticut, they taught me the value of hard work, dedication and commitment,” Zucaro said. “…As an attorney, I understand that the issues are not black and white, but they are complex and deserve thoughtful consideration, not reliance on national policy or political party, I will be an independent voice. In fact, I’ve been endorsed by the independent party, I will work across the aisle.”

Thomas said, “politics are easy, but governing is much harder. Politics are distraction. I call it the fly buzzing in your ear. And you heard throughout this entire campaign and a little bit in this closing statement, some buzzwords tonight, but don’t let that fly distract you. Governance is about nuance and experience. And I’ve prepared for this job my entire life without even knowing it.”

She said, “My graduate school training was in policy analysis and nonprofit management. Working with nonprofits taught me to solve problems with evidence-based data in on budget. I joined the company as an intern and 12 years later was its president leading our growth and managing 25 employees… I understand the need to be fiscally sound, but I want to work on our problems, honestly, without regurgitating the same soundbites that frankly, I’ve heard since I moved here eight years ago. We can dig out of the hole but it will take truth telling … and progress over politics.”

What exactly is “post-pandemic flexibility” – besides word salad? How about addressing the spread of the virus and allowing our children; as well as our lives; to return to normality? Post-pandemic means future. At what point can we say this virus won’t be a threat? I can NEVER again vote for another Republican! Do they sell “Merry Quarantine Christmas” cards?

@NHS neighbor, I think you are confused who is in charge of the shutdowns in this state. It is the Governor and he is not a Republican. Time will tell, but it looks like our excessive shutdowns compared to other states is going to do permanent damage to the economy, while not really saving lives (ours is the 4th highest death count in the country.).

@ Bryan Meek: I think you willfully avoid the subject of a pathetic national response to address this contagion in order to blame a governor who has had to act without any federal guidance beyond “open you state”. You can’t tell me that since the 2001 World Trade Center attack, someone hadn’t compiled a detailed plan for something like this. After all, Tom Ridge figured out a national threat level system.

When you botch the initial containment with misinformation, of course any economic recovery will take longer. Perhaps there was some truth (as well as consequence) to all that document removal and operational meddling of the CDC as reported in 2017. Maybe the administration erased the pandemic playbook without knowing what it was. Or, perhaps it was being directed by someone at a high level who just might be indebted to a foreign adversary. https://www.ucsusa.org/sites/default/files/2019-09/science-under-trump-cdc.pdf

I guess it was Tom Ridge who planned to draw down the national emergency stockpile to 26% during the H1N1 epidemic in 2010 and not replenish it even though Obama-Biden had a super majority in the House and 60 seats in the Senate and would have had no problem appropriating the funds to do so. Really!!!