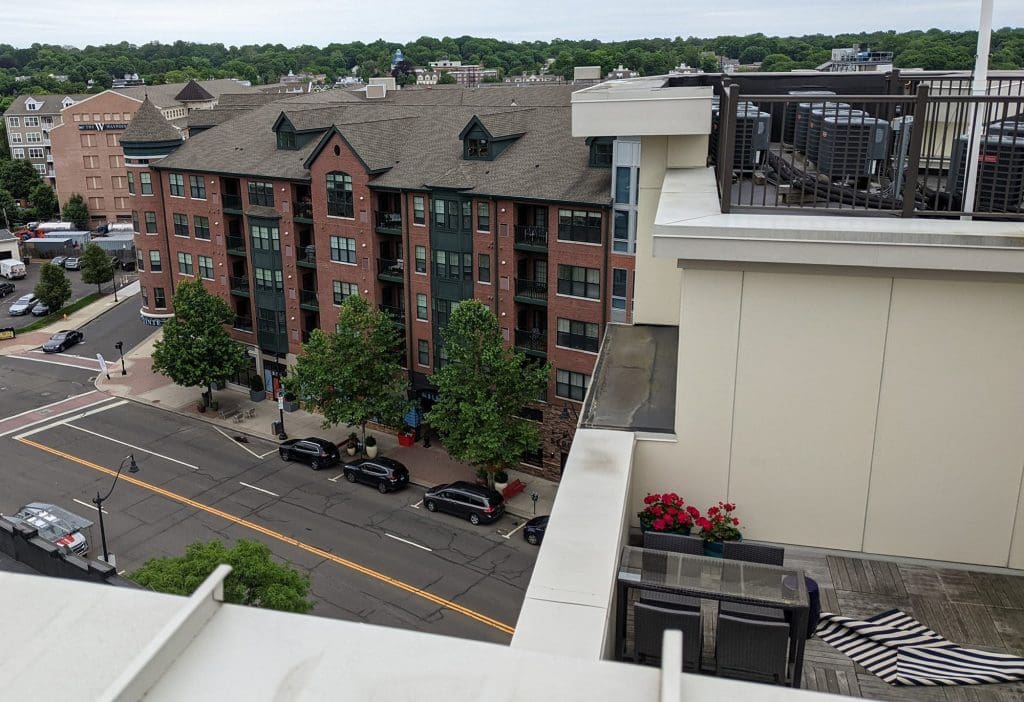 Waypointe, as seen from The Berkeley rooftop.

BQ Holdings LLC bought The Berkeley and Quincy Lofts, two buildings in the Waypointe complex, in February 2021 and sold them May 22 to Beachwold Residential LLC for $15 million more than it paid, according to City records.

Beachwold Residential also bought The Waypointe itself at a price of $208,129,500, which Waypointe I UT Holding LLC bought from the original developers in August 2020 for $157 million.

The Waypointe District dates back at least 15 years, when developer Stanley Seligson hoped to fill almost 20 acres bounded by West Avenue, and Chapel and Academy streets with 350 new residential units, 75,000 square feet of office space and 393,174 square feet of new retail space, according to the Hour. In 2008, he pitched it as 1.1 million square feet of retail, housing and offices and predicted nearly $4.1 million in new property taxes each year. The goal was to create a “unique town center” for uptown Norwalk.

The project picked up steam when Paxton Kinol and Brandon Lacoff of Belpointe Real Estate got involved, and construction began in 2013. Apartments were available for leasing in 2015 as construction continued at Tea House Lofts, the Merwin Street component. Quincy Lofts opened in mid-2016 and The Berkeley came about a year later.

The first building constructed was dubbed simply, “The Waypointe.” Its companion on Merwin Street is “Tea House Lofts.” Both were owned under one management. Beachwold has bought them both, with the sale listing three properties: 515 West Ave., 33 Orchard St. and 11 Merwin St. 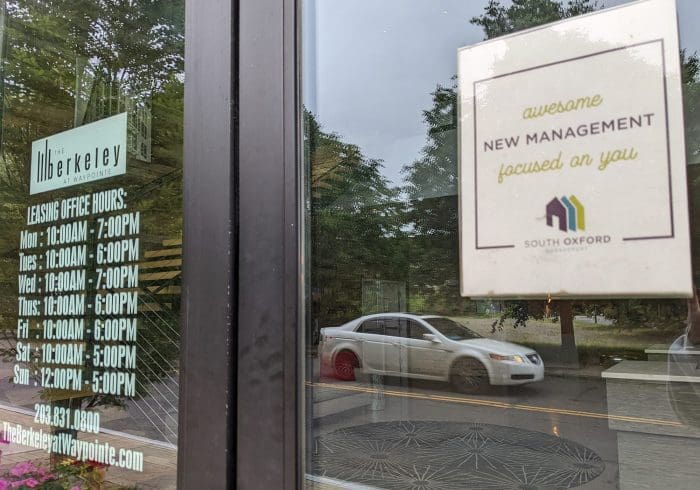 Entrance to The Berkeley.

The Berkeley is at 500 West Ave., on the corner of Maple Street, and Quincy Lofts is down the block at 30 Orchard St. Until last year, they were under separate ownership and management.

Though the sister buildings were owned under separate LLCs since last year’s transaction, both Waypointe I UT Holding LLC and BQ Holdings LLC are connected to Invictus Real Estate Partners in Scarsdale, N.Y., public documents show.

Commercial Observer reports that Adam Neuman, former WeWork CEO, is involved in the Invictus win of a more than $66 million profit from the Waypointe block properties, less than two years after buying the original Waypointe, of which it already had a 10% share.

“The multifamily sector has been on fire from an investment standpoint these past two years, and the portfolio assets— located in Fairfield County, one hour from Manhattan— benefit from easy access to I-95 and the Metropolitan Transportation Authority’s South and East Norwalk train stations,” Commercial Observer reports.

“Neumann is reportedly looking to build an amenity-heavy rental brand, targeting younger renters. He also likely wanted something to depreciate so he could offset the taxes on his lucrative WeWork exit package,” The Real Deal reports.

Beachwold Residential is based in New York. “We presently control over 50 properties and more than 15,000 multi-family units in Connecticut, Texas, Florida, Georgia, New Jersey, Maryland, Tennessee and Virginia,” Beachwold states on LinkedIn.

As for Seligson’s promise of $4.1 million in property taxes from The Waypointe District, the City’s website indicates it’s close to coming true.

In January, Waypointe I UT Holding LLC paid more than $1.3 million in property taxes for Waypointe, according to the City’s website. That represents half the year’s bill. Sewer fees paid in January were more than $76,000.

BQ Holdings LLC paid more than $510,000 in property taxes for The Berkeley and Quincy Lofts in January, according to the City’s website. Again, that’s half the year’s bill. Sewer fees were more than $30,000.

A year ago, Avalon Bay sold its Belden Avenue Avalon complex for $103 million. Avalon Bay bought the property in 2008 for just under $10 million and then built 311 apartments.

Avalon East Norwalk was sold in March. City records show that the purchase price was $88.6 million; Avalon Bay bought the 8 Norden Place property in 2011 for $9.9 million, and then built the 240-apartment complex. The buyer, Boston-based DSF Group, will rebrand the complex as Halstead Norwalk, according to ReBusiness Online.

Yeah come to Norwalk rob us of our affordable properties and then go take your profit🥵👎🏽 any politicians getting rich off the deal!?😩 this is why I we are disgusted R. City is being robbed from us

Commodities, Stock Options, Precious Metals, Art, Bit-Coin, Roulette – there are many different ways to take great risks and – and on occasion – reap tremendous rewards. The savvy investor is always looking for the greatest return with the least amount of risk exposure.

1st – become buddies with the mayor. Contribute the max $1,000 to his campaign. Lo and behold, the P&Z team will really make things easy – spot zone, sell parking lots for a $1.00 – put in (at the towns expense) supporting infrastructure – and – designate the land underneath the project as an “enterprise zone” – so you don’t have to pay the same level of pesky taxes as say – the unconnected or the average residential homeowner.

Look at the names – same guys. Look at the past campaigns – and the contributions. The idea that a thousand dollar gift would return millions in profit – now that’s return on investment.

City Hall maintains that “renters bring growth” and its certainly true Developers have done very well financially with City Hall’s encouragement for building ever more apartments. For a City widely viewed as the most transient in Fairfield County renters now comprise the majority of City residents. And with the welcome mat more renters are in Norwalk’s future.

Of course home owners aren’t quite so celebratory since they pick up most of the City’s budget. The demand by City officials for expensive new schools doesn’t reflect an influx of homeowners. Just an influx of renters keeping the City attractive to new apartment development. At days’ end “City Hall works us.” But not if we’re homeowners.

What percentage of renters have children in school? My guess is it’s quite limited. Especially with the one bedroom apartments. Many of our renters are ex homeowners from the neighboring districts With children already grown and out of school

I am curious what the city gets during these property sales. What would the conveyance tax for these sales be?

@Nancy – Piberman’s slander is really starting to get offensive here. How much more are you going to let him use your platform to call renters everything BUT children of God?

@Everyone Else – Renters aren’t the problem, folks. It’s the corrupt machine politics. It has nothing to do with red or blue, it’s just what we get from having our national parties lined up all the way down to state and local ones.

The only realistic long-term solution is more parties, which means abandoning our outdated first-past-the-post voting for something like Ranked Choice. Splitting our council into multimember districts would help, too. Anything else, isn’t going to get the job done. Don’t say nobody warned you.

I’ve never interpreted Piberman’s comments as ‘slandering renters’. His focus has always seemed to be focused on the leadership that allowed al this apartment development, not the individual renter.

This is Piberman’s opinion, like rank-choice-voting is one of yours.

But far worse is your call to ban him, or sensor him simply because you feel triggered. That is simply unacceptable.

I don’t agree with many of your points, but if anybody called for your censoring I would have the same reaction.

The vast majority of all Americans will rue the day if the 1st Amendment ever falls by the wayside.

@Michael: If Piberman had a positive alternative to propose, like I do with RCV, then I’d love to hear it. But he doesn’t. He just whines and whines about renters. That’s not expressing an opinion, it’s fueling resentment.

This has nothing to do with the 1st Amendment: Nancy is a private business-owner, and Piberman is using HER site. SHE pays the bills here. If Piberman wants to set up his own private website to peddle anti-renter rhetoric, he’s perfectly free to. And Nancy already filters ALL of our comments and regularly censors offensive ones. I’m not asking anything outside of what she already does, which is already within the bounds of free speech law. So, respectfully, please don’t read more into my comment than what I actually wrote. I didn’t say “Abolish the 1st Amendment!”. I didn’t call for Piberman to be banned. I just asked Nancy why she doesn’t care to moderate his comments.

Nancy purports to want a healthy discourse. I think both you and myself agree with this goal. But Piberman’s resentful rhetoric isn’t exactly healthy. I personally am not bothered by whatever Nancy’s line happens to be, I just want to know WHAT it is, in order to be able to make my own judgments about whether it’s worth my time to continue engaging here.

Because while I generally believe that “more speech drowns out bad speech better than censorship” — which again, I think you would agree with — there’s also a “tragedy of the commons” or “bad money chases out good” aspect here. I try my best not to take his anti-renter rhetoric personally, because I know it’s not personally directed, but the divisive nature of his rhetoric means I have to not only defend my positions in the abstract, but also sit here explaining to homeowners how and why I’m not just personally biased against him as a renter myself. Thus, he’s imposing a rhetorical tax on every renter who enters the conversation.

The majority are homeowners. I’m not mad about that, and I don’t hate them. I’d even like to BE one someday! But flip it around: Would you be all that happy if I came into the conversation every single day spouting, “Homeowners don’t bring growth! But they’re sure benefiting from… [blah blah blah]”. And if you had to hear it EVERY SINGLE DAY, do you think you might eventually find it just a LITTLE bit offensive? Even if any one declaration isn’t offensive, the pattern IS.

I’m just asking for a basic level of mutual respect here. Or at least not to be facing an unfairly uphill rhetorical battle. Because the plain truth is that there ARE ways for renters to bring growth. Renters aren’t the problem; stagnation, corruption, and speculation are. Every day that we spend divided against them is another day wasted, as Norwalk falls further and further behind.